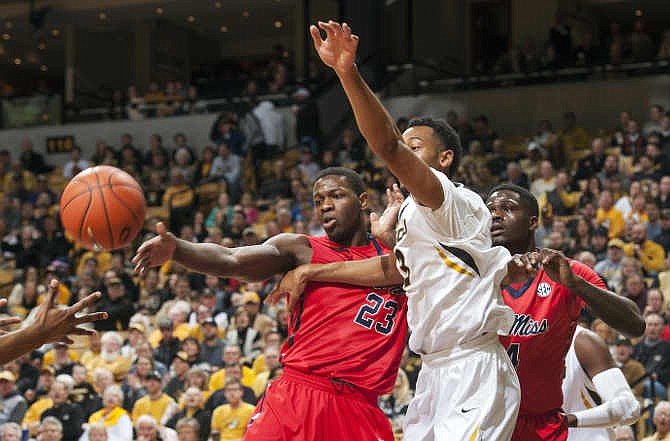 COLUMBIA, Mo. - Missouri suffering its first 20-point home defeat since 2010 last week was not a big surprise. Doing it against Mississippi was.

Two days after hanging tough against a No. 1 Kentucky team that whooped the Tigers by 49 points two weeks earlier, the Tigers showed little interest in ending their six-game losing streak Saturday in a 67-47 loss to Mississippi.

The seven straight losses are Missouri's most since the 1992-93 season.

The team had shown signs of improvement the week before. Five days before a competitive showing against Kentucky, the Tigers got a whiff of their second Southeastern Conference victory before losing by a point at home to Arkansas.

Saturday, however, Missouri shot just 31 percent from the field, missed 19 3-point attempts and led for all of 4:16 against the Rebels.

"I'm not sure I have words to describe the game," said Anderson, who spent much more time than usual in the locker room before speaking to media.

It was close early, but once Mississippi gained a 10-point edge with under six minutes to play in the first half, Missouri failed to make a serious push.

"Disappointed in the effort, and that's probably one of the few times I've said that this year," Anderson said. "Disappointed in how we responded when they got after us."

Sophomore forward Johnathan Williams III said he felt the team showed a lack of energy in the second half, and the team's body language showed.

Missouri was without freshman guard, Tramaine Isabell, who missed the game due to a "coach's decision."

"(I) withheld him today from competition due to his ongoing behavior on the court," Anderson said. "His behavior towards our coaches and teammates at times has been unacceptable. It has nothing to do with his game but just with his behavior and his attitude, and we will reevaluate the situation as time goes on. That's really all I want to say about that."

Anderson previously held Isabell out of the first half of Missouri's loss to Tennessee because he didn't feel the freshman had been practicing hard enough.

The Rebels pulled away from the Tigers with a 16-3 run in the first half. Early in the run, Mississippi junior Stefan Moody threw down a vicious putback dunk his coach deemed SportsCenter-worthy.

Moody finished with a team-high 23 points on 6-of-11 shooting.

Missouri shot just 10-of-33 in the first half and entered halftime down 37-25. The Tigers played 17:46 of the first half without Keanau Post, who scored Missouri's first two baskets of the game but racked up two quick fouls.

The Tigers struggled to make a run in the second half, but sophomore guard Wes Clark got the Tigers within single digits on a 3-pointer - his first points after scoring five in the first 6:18. Williams got Missouri back within nine with a basket with just under 10 minutes remaining, but the Rebels responded with a 14-0 run to bury the Tigers.

Missouri entered the game tied for fourth in the SEC in 3-pointers made (131), and Mississippi was allowing opponents to shoot 34.6 percent beyond the arc, fourth-worst in the conference. The Tigers shot just 6-of-25 from 3-point range.

Freshman guard Montaque Gill-Caesar, coming off a rough game against Kentucky, missed all four of his 3-point attempts Saturday, his birthday.

"You can look at how some of the freshmen played," Anderson said. "They played like freshmen today. All right? Some days they play like juniors and seniors, so I'm not putting it on them. I'm just saying, we've got to, we should be more mature now than we demonstrated today."

Missouri's freshmen combined for eight points points on 4-of-25 shooting.