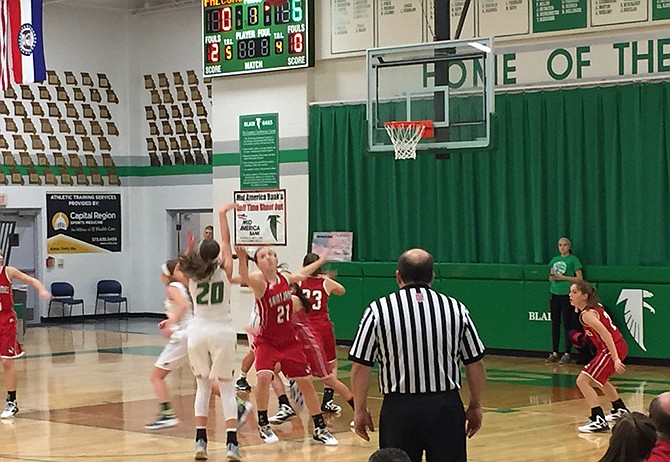 The Blair Oaks Lady Falcons trailed St. James 6-0 with less than 3 minutes left in the first quarter of their basketball game in Wardsville on Thursday night.

When the Blair Oaks Lady Falcons hosted St. James on Thursday, they lost 49-23.

The opening refrain fell flat for the Lady Falcons, who turned the ball over five times in their first eight possessions, forcing head coach Kevin Kohler to call a timeout.

Blair Oaks finished the first quarter with six turnovers and just six shots from the field, two of which were airballed and none of which went in.

"We've got to get some points so we can get some confidence and win some games," Dowell said. "These girls have a lot of potential, and we haven't played up to our potential."

Blair Oaks was held to one point in the quarter, a Macyn Wilbers free throw.

The Lady Falcons knew they would have their hands full with St. James junior Devin Fuhring, who notched 26 points and nine rebounds against the Lady Falcons last Thursday. Fuhring led all scorers in the rematch with 16 points to go with her nine boards.

"She did that to us last game, so we talked about it, we thought we prepared for it," Dowell said. "But they're a strong team, they're well-coached, and they execute exactly what he asked them to do. They're very hard to defend."

Though, there were some signs of progress.

"Last time they backdoored us a lot, so we talked about how to defend that better," Dowell said, "and they didn't do it to us as much, so I did feel like we did gain some ground."

Shauna Rinehart added 15 points for the Lady Tigers, all on 3-pointers.

Kellie Fredendall led Blair Oaks with nine points on 4-of-6 shooting, and Wilbers had a team-high eight rebounds.

Overall, the Lady Falcons shot just 20.5 percent from the field (8-of-39) and turned the ball over 19 times. Wilbers' free throw ended an 8-0 run to start the game for St. James, and the Lady Falcons didn't make their first field goal until senior Kallie Kerperin sank a jumper with 3:21 to go in the first half.

St. James widened the gap with an 11-0 run that began with less than a minute before halftime. The Lady Falcons needed nearly six minutes to score their first field goal of the second half, a mid-range jumper by Fredendall.

Though the Lady Tigers sat their starters for much of the fourth quarter, Blair Oaks was unable to make up any ground, being outscored 7-6.

"They're very frustrated," Dowell said. "We need a couple wins to get their confidence up, because they're a much better team than the way they're playing right now. But they're feeling defeated because that's what we've suffered is defeats.

"So, we're going to practice our offensive intensity (today) and try to get their heads up and their morale up and play like the team that we can be."