After 100-plus years of Masses, Immaculate Conception Church named a Landmark 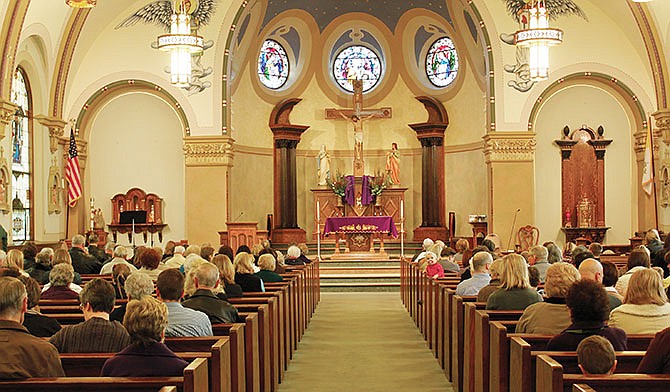 Beginning originally to relieve the overflowing conditions at St. Peter Church in the early 1900s, Immaculate Conception Church in Jefferson City has continued to grow over the decades.

Inside a small house at the corner of then-U.S. 50 and Clark Avenue in Jefferson City, a new Catholic parish celebrated its first Mass the last Sunday in July 1913.

Poised at the east end of the city with growth on the horizon, Immaculate Conception Church relieved the overflowing conditions at St. Peter Church. 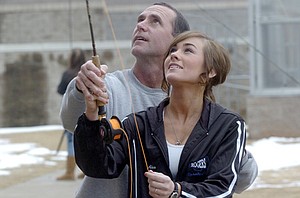 Lafe Caton, who teaches outdoor education at Rogers High School, gives a fly-casting lesson to senior Alex Cook earlier this month. Students were on the school lawn practicing their casting. 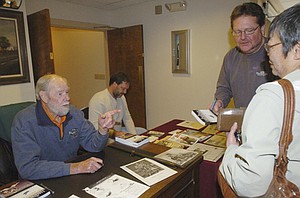 Glen Andrews talks with Mikki Seay, right, after she bought a copy of the book, “An Impossible Cast.” Andrews’ son, Shane Andrews, second from right, wrote the book.

Jefferson City is considered the 59th parish in the early St. Louis diocese, according to the Cole County Historical Society. The Rev. Phoenix Verreydt celebrated the first Mass in 1831.

Visits were intermittent until the Rev. Ferdinand Helias arrived in New Westphalia in 1838 and began monthly visits to the state capital. The first organized meetings were in a private home under the patronage of St. Ignatius until 1846. The first St. Peter Church was dedicated then, and a resident pastor was appointed.

By 1900, St. Peter parish had grown to one of the leading church organizations in the state, the historical society said. It had built a third building for its congregation in excess of 500.

The continually-growing parish eventually decided to divide, with a strictly-enforced residency for parish membership with Jackson Street as the dividing line.

The Rev. Joseph Sellinger, pastor of St. Peter Church, bought the site, where two small, frame dwellings sat at the corner of East McCarty Street and Clark Avenue. Pleus celebrated Mass for the first time in one of the buildings July 27, 1913, and the other was used as a temporary rectory.

The cornerstone of a temporary church and school building, what is now the front part of Pleus Hall, was laid Oct. 26, 1913, and the first Mass was celebrated Christmas Day 1913.

The two-story rectory was built in 1914, allowing the frame building to be used as a convent. Five Sisters of Charity of the Incarnate Word from San Antonio, Texas, arrived in September 1914, when Immaculate Conception School opened with 90 students. Mother Mary Edmund was superior and music teacher.

The first baptism in the present sanctuary was April 22, 1923. Moberly architect Ludwig Abt provided the Romanesque design in mat brick and Bedford stone for the permanent structure, seating 600, which was dedicated May 30, 1923.

The school grew as the parish did. By 1926, it offered classes through 10th grade.

Gottfried Schiller decorated the church in 1929 with simple designs and subdued colors to enhance the ceiling span emblems and stained-glass window scenes. A fire in 1931 caused minor damage.

A new organ was purchased in 1938 during the parish's Silver Jubilee.

When Pleus died in 1946, the parish had 435 families and school enrollment was 340 led by nine sisters.

A one-story new school building, a new convent and additions to the rectory and sacristy were made in the late 1950s, led by the Rev. Kertz, for whom the auditorium is named.

After the formation of the Jefferson City Diocese in 1956, the parish was among many that benefited from Bishop Joseph Marling's arrangement to bring Irish priests to Mid-Missouri parishes.

A second floor was added in 1963 to the school. Enrollment peaked at 805 in 1966, when the parking lot and playground land was bought.

Kennedy Hall and Greaney Gymnasium were dedicated in 1969 as memorials to Irish assistants Father Jeremiah Kennedy and Father Thomas Greaney, who died in a car wreck in 1967. The sanctuary was modernized according to liturgical standards after the Second Vatican Council at that time.

From the small house to Pleus Hall to the present-day church, Immaculate Conception has been a growing congregation.

In 2007, the parish bought the grocery store building and parking area next door. And in 2014, the congregation bought adjacent residential lots to hold for future expansion.

The city's east side has experienced significant redevelopment in the last decade, including Missouri Department of Transportation improvements to Whitton Expressway, with more expected as projects evolved at the Missouri State Penitentiary site.

Many of Immaculate Conception's original members were from the rural area. And today, it retains that flavor, despite serving about 1,600 families with six Masses per weekend.

"This is as close to a country parish in the city," said member Larry Hassenbeck.

The close-knit atmosphere is fed through the smaller organizations, where parishioners socialize and find common pursuits.

The congregation hosts a Thanksgiving dinner for about 400 from its neighborhood, and the annual Bell Tower Barbecue supports a food program in Peru.

The Samaritan Center was born in the church's basement. And anti-abortion activities have begun there and become a mainstay.