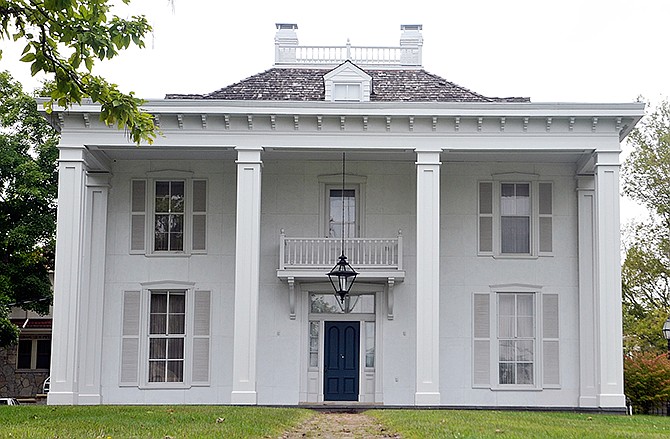 The original builder abandoned the Vineyard Place before exterior work was complete in the 1840s. When Nick and the late Mildred Monaco bought the Jefferson City home, they discovered the original plat book in the basement and completed the original architect's vision, including the front portico and columns and the widow's walk atop the mansion in the 1960s.

Docents at the Missouri Governor's Mansion enjoy telling the story of bachelor-Gov. John Edwards riding his horse into the dining room to eat from the buffet.

He was a bachelor, yes. But during his term, 1844-1848, he was building an impressive mansion for his betrothed.

Sadly, she married another before his term ended and construction halted on what today is known as Vineyard Place, owned by Nicholas Monaco.

During that same time, Edwards also served as district judge of Cole County and a justice on the Missouri Supreme Court, according to the secretary of state's office.

While he was governor, Edwards called for an expedition to join Gen. Stephen Kearney to capture Santa Fe in August 1846.

Once his term expired, he ran with the '49ers to California and eventually served as mayor of Stockton, Calif.

His unfinished home sat for a decade on one of the highest points of the county until Paul and Phoebe Edmunds bought it in 1858.

With a view to the Dulle House, where Union soldiers had established Camp Lillie, the mansion was a prime spot for Union snipers to watch the advance of Confederate Gen. Sterling Price's raid in October 1864. Many buckles and bullets from the Civil War have been uncovered in that part of town.

The home, still unfinished, passed to Christopher Wagner and Andrew Gundelfinger shortly after the war. And then the home and 15 acres exchanged hands a few more times before Mary Haviland, widow of the Haviland china family, returned from New York and bought the home.

Her daughter, Mayme Vineyard, also lived in the home, after the death of her husband. Vineyard continued to live there after her mother's death in 1934 until 1948.

"She defied the social norms of the day by developing the street of Vineyard Square against a male-dominated business world," Jenny Smith, editor of the Historic City of Jefferson newsletter, wrote in the May 2012 "Yesterday and Today."

Edwards and Vineyard also left their mark on the Moreau Drive district, now listed on the National Register of Historic Places.

He was the first of five governors - James Blair, John Dalton, Jeremiah Nixon and Forrest Smith - to live at homes within a couple of blocks of each other.

Vineyard built a street the city wouldn't, built up the quaint Vineyard Square neighborhood, and also designed and built 23 houses on Moreau Drive and Elmerine Avenue.

In 1964, the next historical era began for Vineyard Place, named a city Landmark in 1996.

Despite the rotten floorboards on the first floor to the moldy aroma, Nick Monaco bought the home his wife, Mildred, loved, wanted and had a vision for restoring.

"This was a horrible mess," Monaco said. "You could smell the mold and see the dirt, the wallpaper was falling down."

That became Mildred's playbook as she directed the work of contractor Elmer Goldammer, architect Hurst John and Schwartz Interiors.

After more than a century, the home was finally completed with the front portico and columns and the widow's walk atop the mansion. The design is rumored to also have been used for one of the exquisite buildings in the historic Lemp Street area of St. Louis, Monaco said.

But the interior had suffered.

They salvaged as much of the 1840s walnut and oak beams and the ash stairway and banisters. Goldammer searched rural farmhouses to give each interior door the same box lock.

And they scoured for period wavy pane window replacements, too. The main floor windows are noticeably tall, but more surprisingly are the angled frames.

The 12-feet-high ceilings of the grand four-room main floor are held up with 12-inch-thick limestone walls.

The late Mildred Monaco added ornate back-to-back fireplaces in the dining room - lined with murals of the four seasons - and library.

"Mildred wanted it to look like a fireplace at the White House, early American," Monaco said.

And with a young family at the time, the Monacos lowered the dirt-floor basement and poured a concrete floor and walls. That new space hosted many scouting and club meetings and parties through the years.

What many remember of that lowest room under half of the mansion, was the "secret tunnel." Although enclosed with matching limestone today, the 5-feet-high tunnel apparently extends quite a way, Monaco said.

Local lore said it was used for the Underground Railroad, he said.

Mildred's beloved antiques fill most of the mansion, from Monaco's desk built in 1537 from a single piece of wood to the cannonball bed.

Upstairs, they added closet space for their children, Anne and Michael, and converted a fourth bedroom into two bathrooms and a master changing room.

Including the third floor, where daughter Cathy's room was, and the original cabin, estimated to be built about 1830, Vineyard Place boasts 23 rooms.

What was the attached cabin's front porch now is the family room and the outdoor cooking stove was replaced with a fireplace.

When Gov. Edwards sat there, the view was of the Fairmount horse track and lots of open space between him and the Capitol.

Behind the family room is a modernized kitchen and above is one room converted from the original two.

Monaco fondly refers to the rustic space as "the rear L."

"But we don't know what the eighth (elected) governor called it," he said.

"It depicts the past and celebrates the future," he said of his street, where neighbors continue maintenance and restoration projects. "The neighborhood complements Vineyard Place and its environment.

"For me, it's the most gorgeous part of town."

Battle that never was

Vineyard Place will be one of five sites featured in the Battle That Never Was memorial tour Sunday, Oct. 5.

Other sites with a direct connection to Civil War soldiers include the Bolton-Kelly Home, McClung Park, Woodland and Old City cemeteries, and the Dulle Home.

The Historic City of Jefferson is sponsoring this event to educate residents about Jefferson City's "close call," when Confederate Gen. Sterling Price and a 10,000-man army reached within a few miles of the Capitol before turning toward Lexington in October 1864.

The event this year stands in place of the organization's annual homes tour, to raise financial support for its programs and activities.

Tours, re-enactors, music, lectures, museum-quality displays and the opportunity to walk in the footsteps of both Confederate and Union troops have been organized.

Trolley tours will be narrated by local celebrities or self-tour tickets are available.

Another four bonus sites will host activities as well.

The Col. Lewis Bolton Home, Wardsville, will have featured speakers at 10:30 a.m. and 1 p.m.; the State Archive will be open at 10 a.m., Missouri Farm Bureau will open the Wallendorf House 8 a.m.-4 p.m. and also Monday, and lectures will be delivered at the McClung Park pavilion.

Tickets are available at Samuel's Tuxedo and Schulte's Fresh Foods.