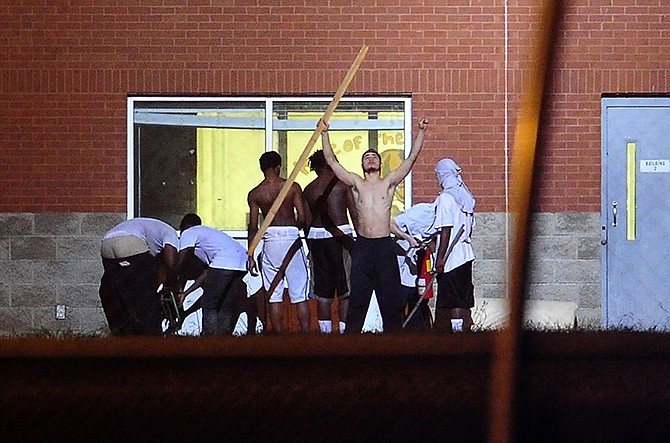 Teenagers try to break into a building at Woodland Hills Youth Development Center in Nashville, Tennessee, Thursday. More than two dozen teens created a large disturbance Wednesday night in the yard of a detention center with a long history of violence, escape attempts and sexual-abuse allegations.

NASHVILLE, Tenn. (AP) - Despite its idyllic-sounding name, the Woodland Hills Youth Development Center had seen a decade of violent clashes, breakout attempts and attacks on guards.

The problems shed light on the difficulty of maintaining order at a center where most of the 14- to 19-year-olds have committed at least three felonies, and the challenges faced by Tennessee's Department of Children's Services in trying to fix the issues.

In an interview Thursday, DCS Commissioner Jim Henry said policies will be reviewed to see if guards could be given weapons such as stun guns to help control unruly detainees. Currently, guards do not carry weapons and must rely on talking with the inmates to quell disturbances.

Henry also said parts of the facility's structure are being looked at, and officials will try to figure out how to better help detainees who suffer from mental illness or drug addiction. Despite being perceived as tough, most of the youths are "damaged when they come to us ... They're angry."

"What we're going to go less to is a correctional mentality," said Henry, who plans to give a report to Gov. Bill Haslam next week.

However, some lawmakers say that's not enough. They want Haslam to reopen a facility closed in 2012, Taft Youth Development Center, which primarily housed older, more violent offenders. The inmates there were transferred to Woodland Hills, which then saw a spike in assaults.

In a letter to Henry, some state lawmakers said they felt "very confident if Taft was still open, these incidents would not have happened."

"We always thought it was a bad idea to put these more violent offenders back in general population with younger offenders," he said.

Between July and September of 2012, police had to be called at least 47 times for assistance, which surpassed total police visits for the previous two years combined. Among the acts of violence listed in police records is a guard trapped in a headlock and repeatedly punched by a young man. Another assault involved four youths ambushing a staff member and beating him until he was rescued by colleagues.

In 2010, the U.S. Department of Justice ranked Woodland Hills as 13th in the country among juvenile facilities with reports of sexual abuse by staffers. In a 2004 breakout attempt, more than a dozen teens armed with broom handles and hurling bricks injured 16 staffers before they were dispersed by police in riot gear.

Everette Parrish, an appointed attorney for juveniles housed at Woodland Hills, said the state had dialed back the population at Woodland Hills from 140 to 80 this year because of a shortage of guards.

"That was a good example of DCS responding in a way they could control the kids - so they thought," he said.

Instead, some teens at the facility found ways to exploit security flaws, he said. Parrish also noted the unarmed guards are not trained to be aggressive.

"To me that's a good thing. It keeps the kids out of harm," Parrish said.

Officials are considering improvements to the facility itself. In this week's violence, inmates kicked through foam panels surrounded by metal to get into the yard. Those may be replaced with solid metal panels, Henry said.

According to officials, the 32 teens who escaped Woodland Hills on Monday found a weak spot in the fence surrounding the yard and broke out. Six remained at large Thursday.

Wednesday night, about 24 teens - some of whom were part of the breakout - reached the yard. This time, police formed a ring around the center's fence, and no one escaped.

Video showed teens chasing and assaulting a man who appeared to be a staff member.

Ten ringleaders were brought to another detention center in Rutherford County for questioning, Department of Children's Services spokesman Rob Johnson said. The rest were returned to their dorms.