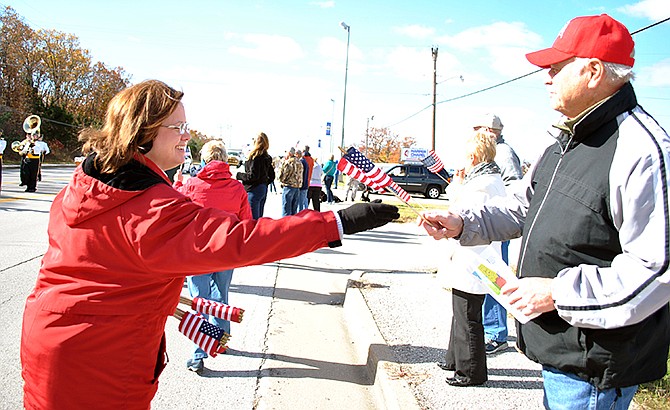 Charlie Morris, right, a U.S. Marine and member of the Lake of the Ozarks Marine Corps League Detachment 1137, accepts an American flag from a Veterans Parade participant.

U.S. Marine Charlie Morris removed his hat, held it over his heart and waved to his fellow Marines who participated in the first Veteran's Parade Saturday in Osage Beach.

A member of the Lake of the Ozarks Marine Corps League Detachment 1137, Morris was proud to see about 20 of his peers walk Osage Beach Parkway West as part of the detachment's Color Guard. 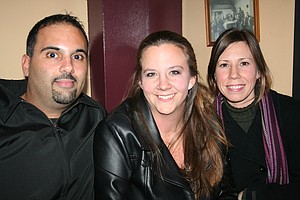 More than 60 participants joined in the event, which was sponsored by the Lake of the Ozarks Elks Lodge 2517, Osage Beach Police Department and city staff.

Spectators cheered for many veterans who rode or walked in the parade and accepted American flags, candy and other patriotic items from parade participants.

For Morris, he was thankful to see the recognition of veterans in the Lake Area in an event like the Veteran's Day Parade.

"Our schools do a great job of supporting veterans on Veteran's Day, however, it is something that often is lacking in our country," Morris said. "Our veterans need to be recognized, and I'm glad this event shows our community's patriotism and appreciation for our veterans."

The Camdenton R-3 School District will honor Lake Area veterans during a district-wide assembly. All veterans are invited to attend. Veterans will be honored with a reception at 8:15 a.m. in the Commons. The assembly will begin at 9:15 a.m. in the gymnasium and feature the Marine Corps Color Guard and the Camdenton High School Pride of the Lake Band escorting the veterans into the gymnasium. The event will last until 10:15 a.m. For more information, call 573-346-9257.

The Versailles Elementary will hold a Veterans Assembly, where veterans are encouraged to attend. It will begin at 8:30 a.m. in the elementary school. For more information, call 573-378-4231.