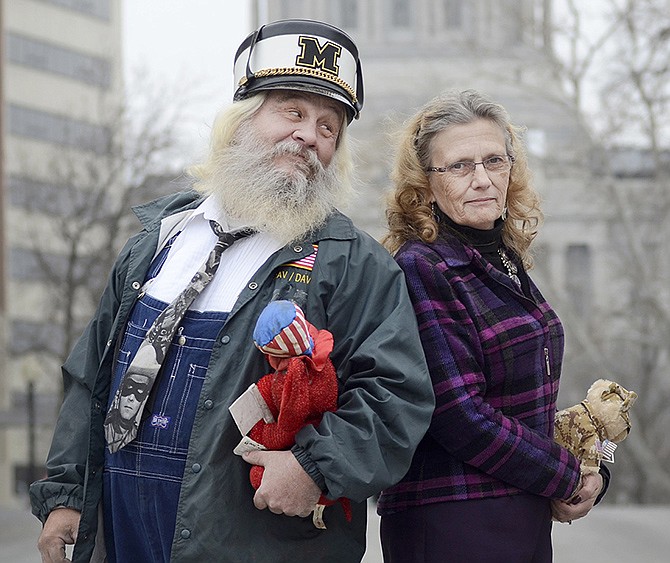 Velma and Leonard Steinman pose for a portrait near the Missouri Capitol. The husband and wife duo are both running for Congressman Blaine Luetkemeyer's seat on different party tickets, with Velma running as Democrat and Leonard as Republican.

But he's never campaigned against his wife, Velma Steinman, before. In fact, it's quite possibly the first time in Missouri's history a husband and wife have competed against one another for a congressional seat.

With his white beard, gadfly persona and penchant for eccentric costumes, Leonard, 62, cuts a well-known figure in Jefferson City. Velma, 53, isn't as familiar as her spouse, but has roots in Cole County just as deep as her husband's.

Asked why the two would run against each other for the same job, Velma replied: "People think we're doing this as a lark. They think it's funny. But I think it shows that husbands and wives can have separate views and still work together. Congress can do the same."

Leonard said: "One way or another, we're going to get into Congress and open people's eyes up."

Last week, as filing opened for the Aug. 5 primary election, both Velma and Leonard stepped forward to compete for the 3rd U.S. Congressional District, a seat occupied by Blaine Luetkemeyer now.

Velma is currently the only Democratic candidate listed on the ballot. On the Republican ticket, Leonard is listed first, followed by Luetkemeyer and a St. Peters man named John Morris.

Luetkemeyer's office declined to answer specific questions about the pair of opponents. A spokesman said: "The congressman is focused on his own campaign and representing the people of the 3rd District. We have no further comment."

Leonard said he has not always been encouraged by party leaders to participate on their tickets. "They tell you politely up front: "You have no recognition,'" he said.

But Leonard feels he's just as well known as others who've tried to run for office. "If you come to the Capitol with me," he said, "People from both the House and the Senate will say, "Hi, Leonard!'"

Traditionally Leonard has filed as a Democrat, but this time he's a Republican.

"I was asked to change parties by some Republicans," he said.

Both of the Steinmans were born and raised in Jefferson City.

Leonard was friends with Velma's older brothers and said he's known his wife "since the day she was born." They married in 1977 when she was 16.

If elected - as the daughter, wife and niece of disabled veterans - Velma wants to be a voice for Missouri's veterans. She serves as the state commander for the Disabled American Veterans Auxiliary.

"I feel our vets need a stronger voice and somebody who is willing to listen, and can understand what their families have gone through," she said. "Their needs are so varied. Our country owes them a debt we can never repay. That's my very top priority."

Leonard said his years as a cross-country truck driver - he still works, by the way, and is proud of his 4 million accident-free miles - has given him special insight into the problems facing Americans today.

"I have a comprehensive understanding of the 49 contiguous states," he said.

Leonard said he and his wife can identify with ordinary Missourians. "We do not live beyond our means," he said.

Neither are planning fundraising campaigns. Leonard, in particular, said he's always paid for his own political campaigns out of his own pocket. "I owe nobody no favors except the real public of the United States," he said.

Velma is particularly incensed by the idea money ought to matter.

"I want someone to tell me, when did raising the most money determine who is the best person for the job?" she argued. "It needs to be about the issues and the needs of people."

They both agreed they'd rather see campaign donations go to the Samaritan Center, the Salvation Army or a veterans' organization than their own campaign coffers.

Velma said she knows some people find her husband's odd ways unsettling and she's not always happy to see him leaving the house in some outlandish outfit.

But she also feels his independent spirit is what makes him "special and unique."

"People think he's harmless and has no sense," she said.

But they both believe his blue-collar demeanor allows him entry onto almost any factory floor and gives him insight into others' working conditions.

"I get to ask questions of the general public. I have no blinders on," he said.

He promised, if elected, he and Velma would keep their household in Jefferson City, not Washington, D.C. And the first week the state Legislature is in session, he'll visit lawmakers there so that he can "find out what they think" about the issues of the day.

Raised by a single mother with the help of the federal assistance, Velma said she had a tough childhood. Although she has her GED, she dropped out of high school her sophomore year after a debilitating car crash.

"I come from humble beginnings," she said. "There's a powerful stigma attached to a child raised on welfare. But a person is not a product of their surroundings. You can make your own future."

She spent most of her career working as operations manager, dispatcher and safety director for various trucking companies. She's also been an administrative aide at the Missouri State Library.

Leonard - who has worked in many occupations, both union and nonunion - has a heart for the poor.

"There's absolutely no work (available). I see people who try," he said.

He said he has taught homeless veterans "how to apply for benefits to get out of that refrigerator box."

"That's not being democratic. That's being a friend. Most of the people I have helped ... remember me," Leonard said.

He does not deny struggling with mental illness. He said he was diagnosed with bipolar disorder, but said eight years ago a psychologist labeled his symptoms as post-traumatic stress disorder.

Velma said she is "sick of derogatory comments" about people with mental and physical disabilities.

How did they end up married?

Velma teases: "Honestly, I couldn't get rid of him."

And, for his part, Leonard recalls: "I needed somebody to lean on, she needed someone to take care of her."

Their marriage survived because he always called home every evening from wherever his rig was parked.

"Never let your last words be words of anger," she said.