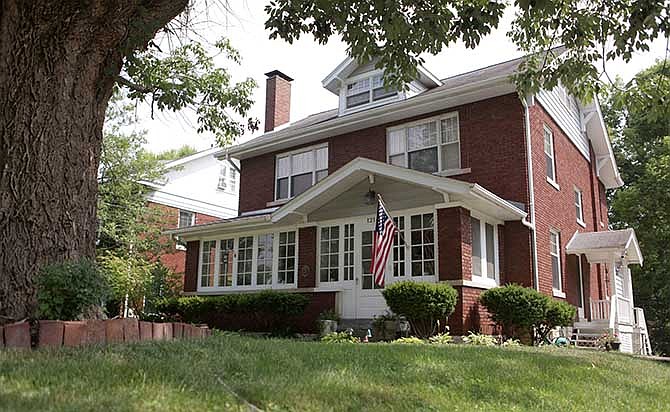 Shae Marie and Dale Eickhoff's Jefferson City home at 1214 Elmerine St. has been added to the National Register of Historic Places.

When Shae Marie Eickhoff walked into 1214 Elmerine Ave. 11 years ago for the first time, she knew she had found her home.

As she and her husband, Dale, have entertained friends, family and theater parties there, repeatedly guests likewise praise the welcoming atmosphere.

Named a city Landmark this year, the Eickhoff home joins several in the nostalgic neighborhood on the list. And it also was included in the Moreau Drive Historic District, recently added to the National Register of Historic Places.

"We love that it's an older home; that's what adds character," Shae Marie said.

The foursquare-style home with craftsman influences was built in 1915. It is one of the oldest of the stone and brick homes along the street.

The frame of the exterior has not changed in the home's century, including the central gable atop two and one-half stories. However, the porch's brick piers have been enclosed.

Inside, herringbone hardwood floors in the foyer and other rooms are original, as well as two original, delicate light fixtures.

When the Eickhoffs replaced the front room carpeting, they discovered a Nov. 29, 1930, Kansas City Star underneath the old layer. So they followed tradition and placed a present-day News Tribune underneath the new.

Fortuitously, the home's floor plan is almost identical to the Indiana home where Shae Marie grew up. So their children, Natalie and Alex, grew up in a similar home.

The Eickhoff's cat Dorothy Gale enjoys the spacious rooms, too.

Each room has its own themed Christmas tree during the season, and each guest receives his own marked glass for repeat visits.

The family spends mornings in the enclosed front porch and much of the rest of their leisure time in the back addition, once a sleeping porch and now a cozy sunroom.

"I grew up with antiques and hodge-podge," Shae Marie said. "That's the spice of life - old and new, mixing it up."

As much as the Eickhoffs value the coziness inside their century-old home, they equally appreciate the novel Mayberry-style streetscape outside.

"Many people live in a house for years and don't know their neighbors," Dale said. "Here, we've known everybody for years."