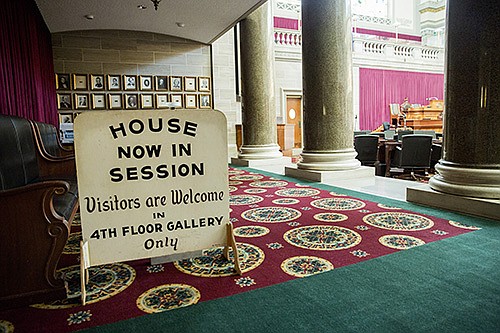 A sign sits in the Missouri House Chambers inviting guests to observe from the fourth floor on Tuesday afternoon. The Missouri Legislature will be in session starting Wednesday.

As Missouri lawmakers convene their annual legislative session Wednesday, they will be doing so with some different priorities than the governor, who must decide whether to sign or veto the bills they pass.

That priority gap could make consensus more difficult on such things as labor policies, Medicaid eligibility and tax cuts - raising the question of exactly how much will be accomplished during a session unfolding in legislative election year.

Republicans will hold a 108-52 House majority and a 24-9 Senate majority over Democrats. That means Republicans should be able to pass their agenda. But compromise may still be necessary with Democratic Gov. Jay Nixon, because vacant seats have left Republicans one vote shy of the two-thirds majority needed to override gubernatorial vetoes in the House.

Here's a look at four of the issues labeled as priorities by lawmakers or the governor:

Republican House and Senate leaders plan to pursue some sort of income tax cut early in the 2014 session.

Last year, Nixon vetoed legislation that would have cut income taxes for individuals, corporations and businesses that report their profits on individual tax returns. The bill would have waived hundreds of millions of dollars annually of tax revenues - a cost that ultimately was too high for some House Republicans who voted to uphold Nixon's veto.

This year, "there's going to be a tax cut," Senate Majority Leader Ron Richard, R-Joplin, said Tuesday. But "I'm hoping it will be a little smaller. I'd rather go into incremental tax cuts and do it over time and not get into the problem we had last year."

Although some lawmakers still prefer a broad-based tax cut for individuals, other Republicans are looking at proposals focused solely on businesses, and perhaps only smaller businesses.

Nixon has indicated he's unlikely to accept a widespread tax cut, such as one for all individuals. That could build momentum for a business-only tax cut.

"I think targeting things in a low-tax state is more beneficial to economic growth than pouring water on a cold floor and hoping it's an ice rink - that's not a tax policy," Nixon said.

Senate leaders have said that one of the most essential items on their to-do list will be a revision of Missouri laws dealing with unaccredited schools.

That has placed a financial burden on the unaccredited districts and led to calls to revamp the law.

Senate President Pro Tem Tom Dempsey, R-St. Charles, has identified the transfer law for unaccredited districts as the one thing, besides the budget, that lawmakers must address this year.

There is no consensus yet about how to revise the law. But Nixon said it "will be a front-burner issue for this session."

"It's clearly an area where Missouri law needs to be improved," Nixon said.

Nixon also has declared it a priority to expand eligibility for Missouri's Medicaid health care program to hundreds of thousands of low-income adults.

But like last year, that's not a priority for Republican legislative leaders. House Speaker Tim Jones didn't include Medicaid legislation on a list of about a dozen priorities he outlined during an interview with The Associated Press.

"I haven't had anyone beating down my door about wanting to expand Medicaid," Richard said.

But Republican lawmakers are expected to propose bills that would revamp Medicaid, such as by making greater use managed care policies or creating incentives for patients to get preventative care and avoid costly emergency room visits for minor issues.

Jones has made it a priority to consider "right to work" legislation, which would prohibit unions from negotiating contracts in which all employees must pay union bargaining fees - even if they are not union members.

"We're going to be having the discussion about giving workers in our state the ultimate freedom of choice" on union fees, said Jones, R-Eureka.

Unions contend the fees are a matter of fairness, because all workers generally benefit from the wages and working conditions they negotiate. Nixon, who has received strong union financial support during his career, has said he would veto "right to work" legislation.

But lawmakers could bypass Nixon by referring the measure to the November ballot.

Richard said the Senate would wait to see what the House passes. In the past, some Republicans typically have joined with Democrats in opposing such legislation.