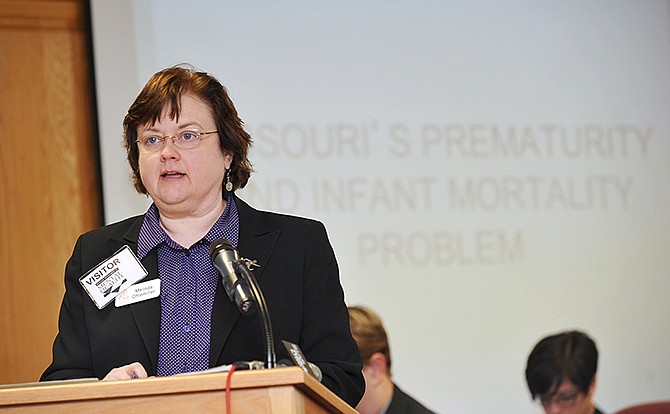 Melinda Ohlemiller, CEO of Nurses for Newborns, served as chair of the Missouri Task Force on Prematurity and Infant Mortality. She addressed a large group Monday at the Department of Mental Health on the task force's findings and recommendations.

A 22-year-old mother in Missouri is credited with saving her newborn's life.

Melinda Ohlemiller said her organization - Nurses for Newborns - got called in to provide preventive services for the woman, services such as teaching her how to perform CPR on a baby.

Several days later, Ohlemiller said the young, single mother had found her baby, with blue lips, lying in its crib. She performed CPR, saved the baby's life and prevented it from becoming an infant mortality statistic.

Ohlemiller said that with the right information and resources - like those provided to the young mother - infant mortality in the state can be reduced.

The Missouri Task Force on Prematurity and Infant Mortality - which Ohlemiller chairs - was charged with researching infant prematurity and mortality in the state and presenting findings and recommendations to the Children's Services Commission.

It presented the findings Monday at the Department of Mental Health.

According to the task force, one in eight Missouri babies are born prematurely.

"There are numerous short- and long-term health issues associated with prematurity," Ohlemiller said.

In response to the problems and data the task force presented to the commission, it offered seven recommendations in dealing with prematurity and infant mortality in Missouri moving forward.

• Establish a statewide perinatal care collaborative, which is a group of individuals or organizations united to improve maternal and perinatal care.

• Establish a maternal/child health home program to integrate a variety of health services for mothers and babies.

• Establish a repository to house all maternal/child health information and resources in one place.

• Integrate the entities providing care across the perinatal spectrum, which the task force believes "would result in a more targeting approach to improving health outcomes.

• Present the importance of regionalized perinatal care, which the task force's report says is care delivered through a three-level system.

• Implement evidence-based interventions, such as promoting the use of prenatal multivitamins and improving the understanding of how nutrition ties in to pregnancy outcomes.

• Establish a commission to oversee coordination and implementation of task force recommendations.

The Children's Services Commission responded to the final recommendation by establishing a subcommittee from the task force to continue to work on the seven recommendations.

"The key is to make sure we don't wait for them (women and children) to get to us," said Rep. Jeff Grisamore, chair of the commission. "We want to make sure there are interventions for us to get to them."