1892 grave of then governor's daughter rediscovered 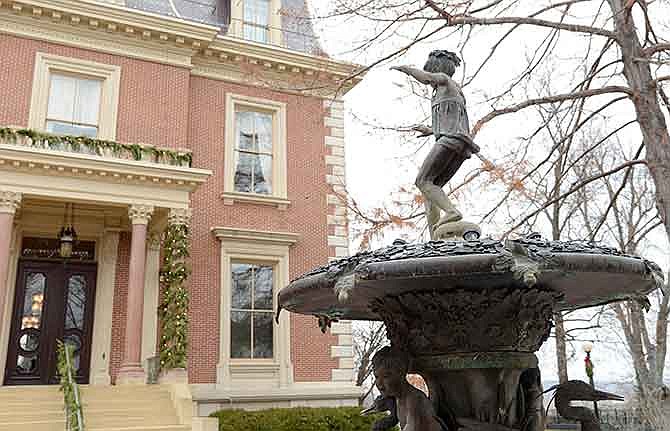 This bronze fountain, found in front of the Governor's Mansion, represents Carrie Crittenden, the 9-year-old girl who died while her father was governor in the late 19th century. The statue was erected in 1996 by first lady Jean Carnahan for the mansion's 125th anniversary.

Although the Missouri Governor's Mansion was bedecked with the ornaments of the Christmas season in 1882, the Crittenden family and many from Jefferson City were mourning the recent loss of 9-year-old Carrie. 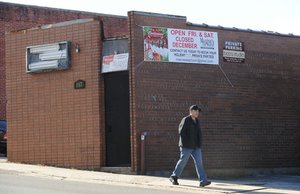 Just two months after Gov. Thomas Crittenden's most historical accomplishment - accepting the surrender of outlaw Frank James - his youngest child and only daughter succumbed to diphtheria on Dec. 20, 1892.

Because of the governor's intent to capture the James gang, including $5,000 rewards, his family had been threatened, including specific threats to kidnap golden-haired Carrie. Residents and mansion employees alike became familiar with the pleasant and inquisitive girl, as they kept an extra lookout for her welfare.

So, her loss was a blow to the community.

"Beloved by everybody in Jefferson City, she was a great pet of her family," Eleanora Park and Kate Morrow wrote in "Women of the Mansion." "Desolation and great sorrow prevailed in the Governor's Mansion.

"The little girl was a child of wonderful perception and lovely temperament and had become a great favorite in Jefferson City."

She was buried in the Woodland/Old City Cemetery on McCarty Street. Later, a memorial to Carrie also was erected at the Forest Hill Cemetery in Kansas City, where her parents and siblings were buried.

As time passed, the original marker of the beloved child was hidden by weathering and lawn. When the Daughters of the American Revolution enumerated the cemetery in 1976, they said, "this monument is not in Woodland Cemetery now."

The flat marker was uncovered this fall, thanks to the work of Nancy Thompson, a Mid-Missouri genealogist currently working to identify all burials and upgrade existing memorials in Woodland/Old City and Longview cemeteries.

An account in the Aug. 13, 1886, State Times, which helped Thompson identify the site, said: "scarcely 10 feet away from Mr. Lay's (Hon. Alfred M. Lay, member of Congress from Missouri) monument, sleeps the beloved daughter of Gov. Crittenden. ... Above the grave of little Carrie Crittenden rises a white marble slab, fronting which is an iron archway, over the green and tim'rous myrtle grows in profusion."

Carrie was the first to die in the current mansion and the only child. Oddly, the other two adults also died during the holiday season - Gov. John Sappington Marmaduke in 1887 and first lady Mary Dockery in 1903.

"If Walls Could Talk" by former first lady Jean Carnahan tells of a repairman who worked in the attic and said a little girl about age 8 in a white dress played near him all day. "Perhaps her ghost?" asked www.prairieghosts.com.

What is known for sure is Gov. Crittenden wrote and published the ballad, "My Child," in memory of his daughter, and Carrie was the inspiration for the playful bronze sculpture atop the fountain in front of the Governor's Mansion.

She was born Caroline Allen Crittenden Oct. 8, 1873, in Warrensburg, where her father was an attorney and also serving his first of two terms as the U.S. representative.

Her father, Thomas, and mother, Caroline, moved to Missouri from Kentucky in 1857. He served as a Union officer with the Missouri State Militia's 7th Cavalry during the Civil War and was appointed state attorney general in 1864 to complete the unexpired term left vacant by the death of Aiman Welch.

In January 1881, Carrie moved with her parents into the mansion after Crittenden's inauguration as the 24th governor. Missouri was the fifth most populous state and was plagued with severe drought at the time.

"He is best known as the man who brought the James brothers to justice," according to the State Historical Society records.

Only two months before the governor lost his little girl, Crittenden met with Frank James, who stayed at the McCarty House, where an open house drew hundreds of townspeople to greet the outlaw Oct. 5, 1882.

During his tenure, Crittenden also took the railroads to court to repay the state loans with interest, and he was instrumental in prison reform at the Missouri State Penitentiary, including inmate labor outside the walls.

The Crittendens carried on their duties, though melancholy, including the visit of Queen Victoria's daughter Princess Louis, and her husband, the Marquis of Lorne, in January 1883 and coordinating gifts for the purchase of bell for the Christian Church.

At her death, Carrie's siblings were Henry, 23, Thomas, 19, and William, 16. And her parents were thoughtful enough to request no children attend her funeral for fear others might catch the disease.

The black butler and carriage boy, David Glenn, also became Carrie's bodyguard when the threats began. And he was in her last thoughts as she said, "Drive on, Dave, I see the angels," Women of the Mansion recorded.

Today, the Missouri Children's Fountain, erected by Mrs. Carnahan in 1996 for the mansion's 125th anniversary, remembers Carrie and all children thanks to the work of Missouri sculptor Jamie Anderson.

"She felt children of the mansion had a story to tell," said Rebecca Gordon, Friends of the Missouri Governor's Mansion director.