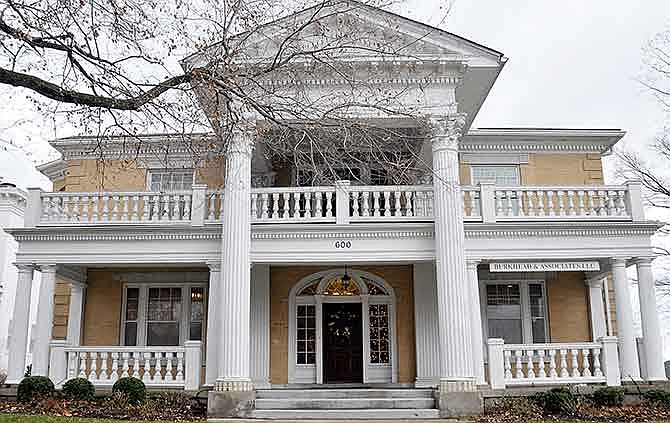 The remodeled exterior at Burkhead and Associates at 600 Capitol Ave. in Jefferson City, Mo.

For the late Bob Dallmeyer, the balcony of 600 E. Capitol Ave. provided a teenager with a front row seat to watch President Harry Truman and British Prime Minister Winston Churchill drive by on their way to Fulton for the latter's famous "Iron Curtain" speech.

The imposing blonde-brick, two-story home saw other children and grandchildren build memories there.

Even Frank Burkhead, now owner of the building with his wife, Carol, fondly remembers spending time there as a child when his mother worked for the Missouri Police Chiefs' Association.

The Burkheads operate their accounting business out of what was once the home of a distinguished Jefferson City business man.

William Q. Dallmeyer bought the double corner lot in 1869, according to historic preservationist Mary Ann Hall. But the original one-story, red-brick home there faced west. An addition including a second story was likely added in 1875.

And then in about 1910, it was remodeled in a neo-classic style.

The first front door was filled in with an ornate dining buffet and the new front door and portico flanked with fluted, Corinthian columns. The second-story porch may have been added in the 1930s.

One of many distinctive homes along Capitol Avenue, the Dallmeyer Home was named a Jefferson City Landmark in 2005 and was listed on the National Register of Historic Places that same year.

The home passed from Col. William Q. Dallmeyer, who reared five children there with his wife, Sophie, to his son William A. Dallmeyer. Robert Ewing Dallmeyer was the third and final generation to call it home.

It served as efficiency apartments and business offices for more than half a century before the Burkheads completely renovated the home. Inside are new floors, a new staircase and modern utilities. But the home retains its grand residential character with the spacious rooms, some original molding and fixtures and doors salvaged from another impressive, historic building.

"Lots of people ask about these doors," said Carol Burkhead. "And our older clients remember how fantastic the Lohman house was in its day.

"I think people with an appreciation of history would approve that these doors are going to good use."

The owners kept the home's exterior as close to what it looked like in early 20th century Dallmeyer family photos, thanks to state and federal historic tax credits off-setting the project costs for a small business.

"Our goal was for it not to look like an office," Carol Burkhead said. "We think our clients like coming here; it's easier on the eye."

When William Q. Dallmeyer moved his young family onto what was West Main Street at the time, it was becoming the premier residential street for the prominent and wealthy, anchored by the Missouri State Penitentiary, where many operated businesses, to the east and the Capitol and downtown to the west.

William Q. had been elected in 1864 as a state representative from Gasconade County, where he farmed, operated a general store at Cooper Hill, served as justice of the peace and was postmaster at Woollam. The Civil War veteran, who served first in Captain Cooper's Home Guard company and later led the Dallmeyer Battalion, then was elected state treasurer in 1868.

He stayed in the Capital City after that term, becoming a force in the financial industry.

In 1871, along with Nelson Burch, he organized the First National Bank, absorbing the Capital City Bank. Dallmeyer was elected cashier from 1874-1882, when he bought a controlling interest in the Exchange Bank in August 1882 and became the Exchange Bank cashier. He was later elected president of Exchange Bank in 1907 and continued until his death in 1908.

William Q.'s son William A. followed in his father's footsteps, as cashier and later as president of Exchange Bank, as well.

William Q. Dallmeyer, who is buried in Riverview Cemetery, also served 18 years as treasurer of the Jefferson City Board of Education.

He immigrated from Dissen, Germany, at the age of 16, first working as a dry goods clerk in New York City then in the commission business in New Orleans. By 1854, he was in St. Louis and two years later in Gasconade County, where he remained until his election after the Civil War.

"Col. Dallmeyer, while on enterprising and progressive citizen, who has been identified with the progressive spirits of the Capital City since he made it his home in 1868, is a man of prudence and fine judgment, who ranks with the best financiers of the state," according to the 1900 Jefferson City Sketchbook.

"Under the direction of his well-balanced mind his movements in life have been attended with uniform and substantial success. His sterling integrity and prudent business judgment has been a great factor in making the Exchange Bank one of the greatest financial concerns in Central Missouri."