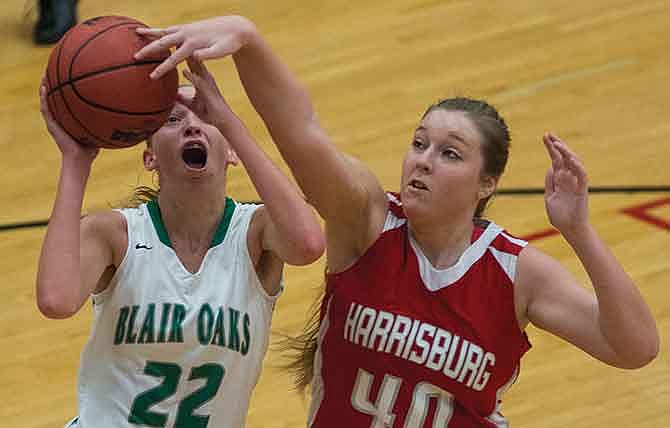 Chelsi Emerson of Blair Oaks puts up a shot against Harrisburg's Bailey Ivicsics during the third quarter of Saturday's game in the Missouri National Guard Shootout at Fleming Fieldhouse in Jefferson City.

After a win Thursday against St. Elizabeth, Blair Oaks girls basketball coach Leroy Bernskoetter said he would like to have seen more from starter Macyn Wilbers, who didn't have any points in the game.

Wilbers bounced back emphatically on Saturday, putting up a double-double in the Lady Falcons' 56-53 defeat of Harrisburg in the Missouri National Guard Shootout.

"She responded back," Bernskoetter said. "Like I told her, I said, "Don't worry about it. Just go out and play, have fun. Don't worry. Sometimes I forget you're only a sophomore.'"

Wilbers pulled down a game-high 12 rebounds and scored 10 points - seven of which came in the first half to push Blair Oaks to a 10-point halftime lead.

With key players Carli Buschjost and Veronica Wiebold out due to injury, contributions from young players were crucial.

Sophomore Sarah Wolken scored seven points off the bench, including four in the fourth quarter, and had six rebounds. Sophomore Kellie Frendendall scored four points in the second quarter, and freshman Sydney Wilde, who got her first varsity experience in the St. Elizabeth game, started again and chipped in with a field goal and three rebounds.

"They're young, and they're learning, and they've got to build on their confidence, so hopefully this is a good one," Bernskoetter said.

Getting some help from seniors never hurts, either.

Lauren Viessman scored nine points, five of which came on free throws down the stretch. Viessman hit a 3-pointer with 0.3 seconds remaining to end the third quarter and give the Lady Falcons a little breathing room at 42-37.

"She was up for this one, because she knows a lot of the girls on the Harrisburg team," Bernskoetter said.

Harrisburg shot 1-of-13 from behind the arc in the first half, contributing to Blair Oaks' double-digit cushion.

The Lady Bulldogs made a push in the second half, however. The Lady Falcons extended their lead to 14 coming out of the half, but Harrisburg scored three points on three straight possessions to pull within seven. A Hailey Lowrey bucket pulled the Lady Bulldogs within a basket before Viessman's quarter-ending 3.

The Lady Falcons' lead went largely uncontested for much of the fourth quarter, sitting at 10 with less than four minutes to play, but Harrisburg went on a 9-2 run to get to 53-50 with 64 seconds remaining. Blair Oaks scored on a Wolken basket and a Wilbers free throw to go up six. Lady Bulldog Karyssa Giboney hit a 3-pointer with 3.8 seconds to play, but the Lady Falcons executed a seamless out-of-bounds-to-out-of-bounds baseline pass to get the ball in and run off the clock for a win.

Kirsten Southerland led Harrisburg with 16 points, and Chloe Franklin scored 10, but it was not enough for the Lady Bulldogs, who fell to Blair Oaks for the third time in two years.

The Lady Falcons improved to 4-3 on the year.

"This is a great win," Bernskoetter said. "I told them, this is a super W for us, because Harrisburg's a good team. We had tough practices and the girls responded well. I just thought it was a great game for us. I think they played so well."