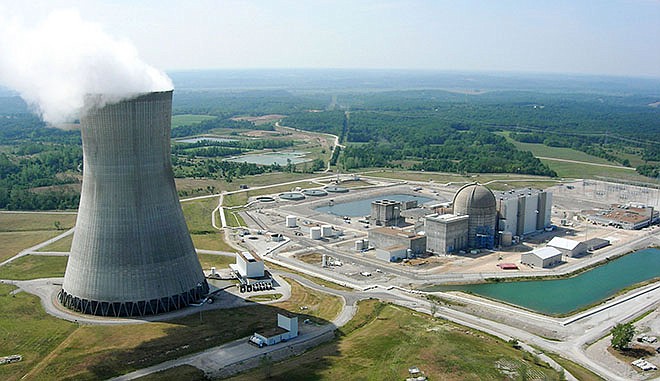 Callaway's nuclear plant is shown above.

The U.S. Nuclear Regulatory Commission (NRC) granted the plant a 40-year operating license in 1984, and Ameren is seeking renewal of the license, extending it to 2044.

In his three decades for at plant, Patterson has worked with the maintenance team and was previously a shift manager and outage manager. In 1983, Patterson was licensed as senior reactor operator.

Patterson noted the milestones in his 34 years at the plant.

The nuclear facility has planned outages every 18 months, during which it changes fuel in the reactor and performs maintenance tasks. The plant's 20th and most recent outage was this past fall.

Ameren Missouri considers this last planned outage one of the largest in the Callaway Energy Center's history. The plant replaced the original reactor vessel head installed when the nuclear facility went online in 1984. That new reactor vessel head was a $150 million piece of equipment.

"It allowed the plant to be more reliable and provide us a better margin for continued operation," Patterson said.

The plant replaced steam generators, a multi-million dollar project, during a refuel and maintenance outage in 2005, Patterson said.

"This is all part of bettering the plant and allowing us to operate for our 40-year license," Patterson said. "This increased our equipment reliability by changing the steam generators."

"We went from refuel to refuel with continuous operations," Patterson said. "Those are pretty big milestones."

The Callaway plant remained consistently online or in service for 520 days in fall of 2008. Its second breaker-to-breaker run was in 2011. At that time, the plant was online for all 489 days between planned outages.

In 2012, the Institute of Nuclear Power Operations (INPO) recognized the Callaway Energy Center for excellent performance. Patterson described INPO as a nuclear industry watchdog. He said obtaining such a high recognition with them took a lot of hard work and effort from all of the plant's employees.

"That was a plant accomplishment where everybody worked together to get that rating," Patterson said.

To get that rating recognition, Patterson said the plant did a few things that sound simple but made a big difference. One of those initiatives was working on procedure adherence. The plant worked to reinforce procedures with employees and made sure employees understood how procedures contributed to the plant's operations.

"We spent a lot of effort to increase the skills and knowledge level of our folks so they had a better understanding of how the plant ran and worked. By doing that, we were able to work together more as a team and come together to solve issues," Patterson said. "And at the same time increase the excellence of our operating department - where we were able to handle minor events at the plant and not have them cascade and keep the unit online."

Patterson said the INPO rating is one of the milestones of which he is most proud.

"That put us into a grade of excellence among our peers," Patterson said. "People come to us looking for that guidance and what did we do to obtain that rating.

The plant, Patterson said, has been working on changes in response to NRC Fukushima orders. After the 9.0-magnitude earthquake and 45-foot tsunami struck Japan in spring 2011, Japan's Fukushima Dai-ichi nuclear facility had significant damage.

The NRC, because of that event, took action on its own policies in an effort to make U.S. nuclear facilities better prepared for disaster.

The Callaway plant did some maintenance during its most recent planned outage to follow NRC's Fukushima orders.

"Making sure we are covered in all seismic and tornado (events) - hardening the plant for natural disasters," Patterson said. "That's another big project we are working through right now."

2012: Callaway Energy Center was recognized with "excellent" performance by the Institute of Nuclear Power Operations (INPO).

Fall 2014: The Callaway plant completed its 20th refueling and maintenance outage - during which it replaced its original reactor head.