Teen to be featured in ABC segment 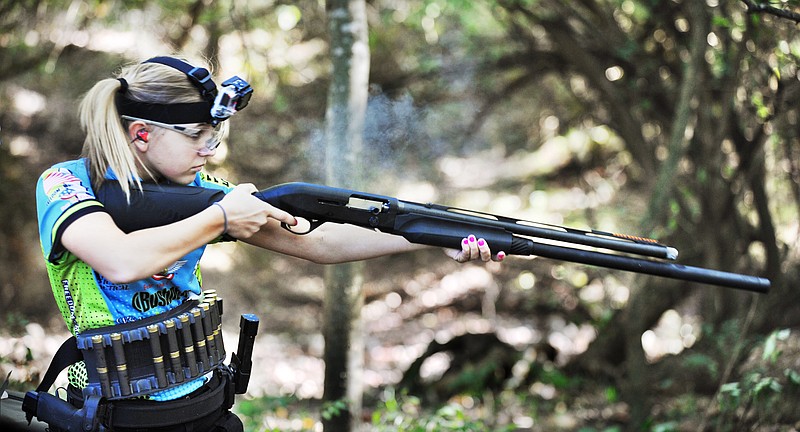 While wearing a small video camera on her forehead, Katie Francis fires a shotgun as she demonstrates her shooting skills for a film crew from ABC's 20/20 news show.

Not too many 14-year-old cheerleaders pose for their Homecoming pictures with their own AR-15 semi-automatic rifle in hand.

On Wednesday, she spent her afternoon in the woods of her grandfather's farm with David Muir, the American television journalist who serves as the weekend anchor for ABC's "World News" and co-anchor of the newsmagazine show 20/20. He also fills in for Diane Sawyer when needed.

Francis is among the youngest, and most elite, shooters in the nation. She regularly competes in a sport called the "three-gun competition" which requires participants to speed through an outdoor course while engaging targets with a rifle, shotgun and handgun.

Although her family feels the activity is safe, and even healthy, her parents' decision to teach all of their three daughters - the youngest is 5 - to handle guns is not without controversy.

When the televised newsmagazine first contacted the Francis family three months ago, their inclination was to decline the interview.

"We thought they were going to crucify us," said Julie Francis, Katie's mother.

Eventually the news crew successfully persuaded Francis, and her husband, Chad Francis, to participate in an interview portraying their home as a place where gun safety was emphasized and respected.

Chad Francis - a former marksmanship instructor at the Ike Skelton Training Center -introduced Katie to gun safety concepts when she was 5 years old, but it wasn't until she was a pre-teen that her interest in competitive shooting grew.

His wife was initially uncomfortable with guns in the home, but has mellowed. Julie said guns sitting on cabinets used to worry her.

Now she said: "They are only as dangerous as the person operating them. I've adapted pretty well to their lifestyle."

Francis recognizes some people may feel his parenting is irresponsible, but he believes kids who are introduced to gun-safety training in a matter-of-fact manner soon satisfy their curiosity.

He noted his younger daughter Sagel's attitude toward toward touching guns in the home is: "Nope! Don't care!"

The ABC news team is working on the story to open up a "conversation about guns in America," Muir said Wednesday.

The crew arrived around 1 p.m. Tuesday and planned to leave Wednesday evening.

They spent the day in St. Thomas, pulling together a sort of "Day in the Life" piece on Katie's upbringing. They followed her to school in the morning, chatted with her sisters, filmed her as she rode the family's utility vehicle around the farm.

And, of course, they filmed her shooting.

"Katie's story is unique in that she has not only her family, but a community, rallying behind her," Muir said, noting that neighbors often drop off bags of empty soda cans to be used as targets.

Muir was particularly struck by the image of a pretty young girl attending a dance - and yet having a gun at hand.

"It's this juxtaposition of images that makes Katie a charming and interesting young woman," he said.

He said she's found a way to start a new conversation about gun safety.

"If you are taught how to be safe, and how to excel, can it set an example for others about what it means to be truly safe around guns?" he queried.

Muir added: "It's a controversial topic, no doubt. And not every parent will agree about how they've raised their children. But they are determined to keep their kids safe. They hope to prove, by demystifying guns, they will help keep this country safe."

Muir said the ABC news team is traveling around the country collecting stories about the impact of guns on Americans' lives. Julie Francis believes the stories likely will portray a variety of situations, some tragic.

The TV episode has not yet been scheduled, but Muir said it probably will run in the next two to eight weeks.

"We're working on any number of projects at one time," he said.

"It's important to find consensus on this issue of gun safety in America," he said.

From Katie's perspective, having the news crew follow her to school was "really cool." She said people at first didn't quite understand what was happening and were curious.

She said "acting natural" wasn't so easy. She wanted to dress up for school on Wednesday, but her mom persuaded her to wear her usual jeans.

"It's difficult because you want to act like yourself, but you also want to put your best foot forward," she added.

She believes guns are not toys and that video games teach people to disrespect weapons. "They show that it's OK to point them at people and shoot, and it's not," she said. "You need to have respect for guns in the real world."

She knows not everyone supports her parents' decisions.

"I look at it this way. For every 300 positive comments I get, I hear about two negative comments. Most people support this," she said.

Her goal, someday, is to compete in the Olympics. But she enjoys the running-and-shooting activity - which isn't an Olympic sport - more than pure marksmanship.