Landmark church has been on leading edge of social issues 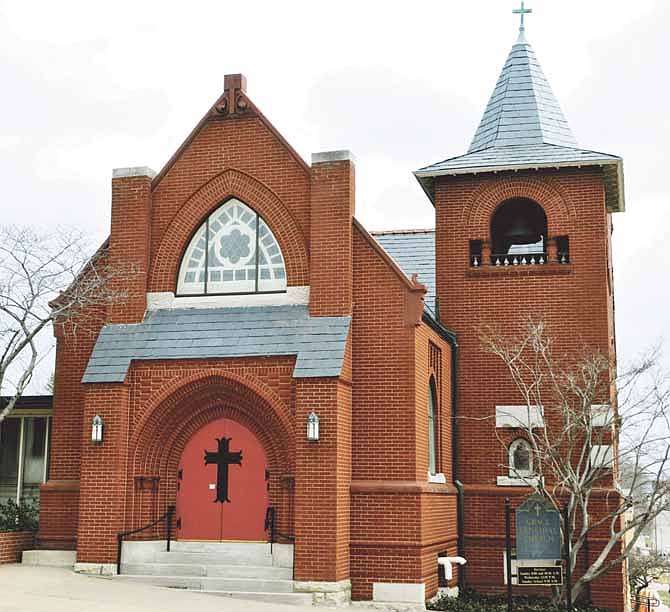 The Grace Episcopal Church on Adams Street is designated as a Jefferson City Landmark.

The social development in Jefferson City has been influenced by the nearly 180-year presence of the Episcopalian church.

As early as the 1840s, the local congregation had taken on a ministry to convicts at the State Penitentiary.

The first Grace Episcopal location near the northeast corner of Madison Street and Capitol Avenue served as a hospital during cholera outbreaks and the Civil War in the mid-1800s.

In the late 1800s, clergy supplemented their incomes by opening private schools.

The congregation was instrumental in moving local restaurateurs out of desegregation in the 1960s.

And today's issues of poverty and hunger have directed the congregation's social interests toward such local services as the Common Ground Community Center, where it tends a community garden on-site and has orchestrated farmers markets and cooking classes.

"We see what we can do, not for, but with other people," said member Ken Luebbering. A comparably small congregation in comparison to its fellow downtown churches, Grace has focused on building partnerships with the great community to join in its work.

"It's whether we can work together, not if we believe the same," Luebbering said. Grace Church began as a mission in 1836, meeting first at the Cole County courthouse before building its first structure in 1842. The present church building at 217 Adams St. was completed in 1901.

In recent decades, the congregation has entertained the idea of relocating away from downtown. But in the end, it has chosen to remain active in its neighborhoods.

Architecturally, the church is very traditional, even medieval. The sanctuary's high ceiling looks like a wooden ship turned upside down. And the floor plan is a modified cruciform, highlighted by columns and stained glass.

When the Rev. Ned Cole came to the parish following World War II, one of his first leadership moves was to lift the segregation within the congregation.

Several faculty members from Lincoln University belonged to the church, but all black members had been asked to sit in the back and take Communion last. Black children were not allowed in Sunday school classes.

"Appalled by this revelation, Rev. Cole told one of the vestrymen that he was not sure he could stay as rector if that policy stood," a church history said.

"The next week, Grace Church changed the policy and began its journey to becoming a leader in the civil rights movement in mid-Missouri."

In 1960, the Rev. Arnold Mintz was rector and was the president of the Ministerial Alliance.

Reliable oral history says Mintz and the vestry would not OK their neighbor's liquor-by-the-drink license at the old Missouri Hotel restaurant, until they agreed to serve all of the church's members, Ken Luebbering said. The simple act was part of several civil rights stands in the community, including sit-ins and picketing at the bowling alley and skating rink. But Luebbering sees that church decision as symbolic.

"It made it easier for other restaurants to do or harder for them to resist," Luebbering said.

Although the congregation has found common ground in social justice issues, the views and backgrounds of the individuals vary widely, Luebbering noted.

"The church is very careful in taking positions on controversial issues," Luebbering said. The congregation may have been the earliest in Jefferson City to integrate services. And today, they have a modest membership of Sierra Leone immigrants.

"Diversity is part of our DNA," Luebbering said. "We work hard to maintain that."

Correction: The church congregation influenced the Missouri Hotel restaurant to desegregate in the 1960s. The original version of this article named the wrong restaurant. The text has since been corrected.