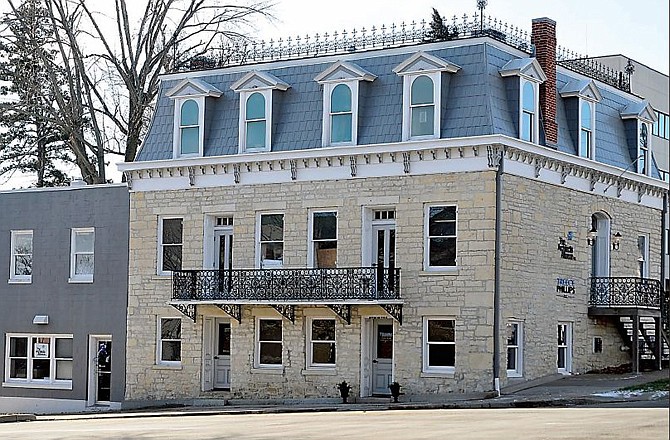 William Porth's home was built on the tall hill in Jefferson City which greeted travelers crossing the Missouri River bridge on Bolivar Street in the 1800s.

The intersection of Bolivar and Main streets in Jefferson City has been a bustling commercial district for going on two centuries.

William Porth was one of the earliest residents in what would be referred to as "Rich Man's Hill" and later "Richmond's Hill."

His home was built on the tall hill at the southeast corner of the intersection, which greeted travelers crossing the Missouri River bridge at Bolivar Street in the 1800s.

Labor from the Missouri State Penitentiary was used to shrink the hill to prevent accidents by runaway wagons.

Although altered several times, the building at 631 W. Main St. is one of a handful of remnant architecture of what once was the industrial Millbottom area of town.

Today, it houses the offices of The Architects Alliance.

Other nearby Landmarks include the Rotary Centennial Park, the Byrd-Haar House, and the Cliff Street Mansion.

The Urban Renewal Capitol West Project in the late 1970s and early 1980s removed several buildings in the area. And the James C. Kirkpatrick Office Building and parking areas were added across the street from the Porth House. The Missouri Department of Transportation also has a garage and offices, built in the 1940s east of the Porth House. The block west of the limestone "cotton rock" structure retains most of its vintage, residential appeal. The revived Landmark was recognized by the city's Historic Preservation Commission in 2002. The building also has been added to the National Register of Historic Places as the Dr. Joseph and Effie Porth House. The Architects Alliance bought the house after winning a use competition from the Jefferson City Housing Authority in 1999 and moved in following renovations, which restored the historic character while adding modern necessities.

The property is co-owned by Cary Gampher, Seth Evans and Larry Brandhorst.

Many stories have come in since the rehabilitation, Gampher said. Many recall the days when the building was the Colonial Tea Room.

Many of the dining room patrons were ladies gathering for tea while their husbands, often politicians, enjoyed stronger drinks at the tavern across the street, today's Paddy Malone's.

"It's neat to watch the smile on their face when they tell you the history of your own building," Gampher said.

Three generations of the Porth family lived in the home before that.

The Porth House is one of only a dozen buildings still standing today that were in place prior to 1860.

During the Civil War, however, the Union Army preferred the hill for its tactical advantage and built several fortifications there.

And troops were reported to store ammunition in the Porth House basement. The home was near Gen. John Fremont's headquarters at the Dulle Home on St. Mary's Boulevard.

Judge William Porth, who owned the first telephone company in the Capital City, emigrated to Missouri in 1842 and was elected presiding judge in 1876, where he died in office.

Records indicate Judge Porth shared the home with a boarder, F.W. Roor, a clerk, and a servant named Elizabeth Arenz. And he was described as the "most successful Millbottom Prussian."

His son, Joseph, inherited the house and raised his family there from 1888 until he died in 1923.

Dr. Porth established his medical practice in the lower floor of the home while gaining a reputation as a prominent resident, serving three terms as state representative and as mayor in 1903.

He also served as county and city physician and was president of the Cole County Medical Association.

This is the same Porth family who built in Westphalia the brewery, the St. Joseph Church and what is now the Westphalia Inn. According to Terry Neuner, inn owner, the family moved to Jefferson City when the Civil War became imminent.