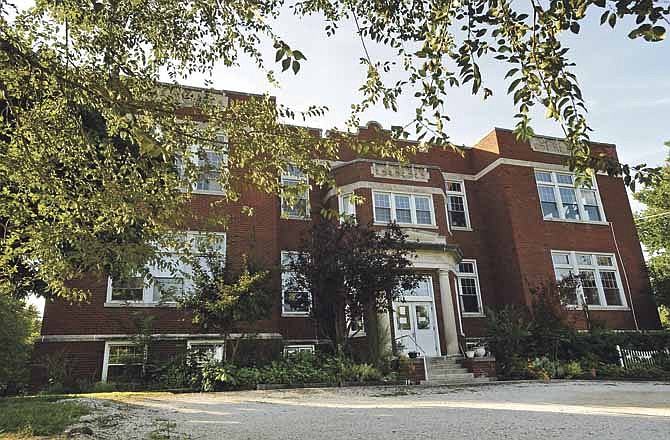 In 1913, Jefferson City voters passed the largest bond proposal yet to expand the high school on Hobo Hill and to build two new grade schools, including Moreau Heights.

The metal tube from the second-floor, fourth-grade classroom made fire drills memorable. And many students stopped at the corner candy store on their way home.

In its heyday, Moreau School students didn't experience snow days, because students all lived within walking distance. And one-hour lunches were scheduled, because most students went home for their mid-day meal.

The sounds of students at recess were absent from the building when the current Moreau Heights Elementary School opened in 1955, until the private school opened in 2000.

When students filled the six-room building for the first time in 1914, the surrounding subdivision was just developing. In less than 20 years, the school was in need of expansion.

The 1932 addition brought two rooms separated by folding doors, which opened to a stage for special events.

And in 1952, classroom shortages were common across the state. The post-World War II "baby boomers" were reaching school age.

The 1953 bond issue not only built the current Moreau Heights School, but also West School, an expansion at Park School and South School to replace the Broadway School.

A year before the students walked from their old school to the new one, Jefferson City public school integrated in the fall of 1954. Before then, all black students attended Washington Elementary School and Lincoln University High School.

Immaculate Conception School leased the building as an annex in 1958, while it built its own expansion.

Nichols Career Center also held classes there for a time, while its current building was constructed.

The Lincoln Cooperative Extension Department offices were there for nearly 20 years.

Then, in 1997 a new owner brought the vision of a community arts center, including a pottery room, art gallery, niche cafe and ballet school.

A "Save Our School" committee organized in 2000, when fears developed the building might be razed. That's when the Montessori Society moved in.

"It was the country school moving to the city," said Directress Lori Steele.

The school had a smaller facility in the rural Schumate Chapel Road area.

The former school building brought the Montessori school into the heart of a neighborhood.

"It seems the building always has been a service to the community," Steele said.

Many visitors through the years have shared their memories from various classrooms.

And the not-for-profit has made historical accuracy a priority in caretaking, replacing windows with replica, transom-style vinyl or seeking out identical mortar for tuckpointing.

The building has allowed the school to expand from one to four classrooms, serving mostly kindergarten through third-grade students.

At their former location, they had a constant waiting list.

"Here, we have the potential to have lots of students," Steele said, although Montessori focuses more on the quality of education.

The architecture lends itself to the Montessori philosophy with its large, open rooms with lots of sunlight to inspire students.

"It has been a neat, educational experience for them," she said.