From hotel to office building, its name is constant: Governor

The Governor Office Building, once the Hotel Governor, has two historic legacies.

The first began in the 1940s as a central and essential hotel, serving as meeting place for political, business and romantic liaisons. 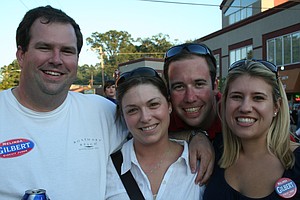 The second began in the late 1990s when developer Bruce Cohn rejuvenated a sad downtown structure, setting a new precedent for the economic potential of viable older buildings in Jefferson City.

More than a hotel

The Chamber of Commerce identified the housing of legislators and others doing business with state government in the 1920s as a "serious concern," historian Gary Kremer wrote in the Missouri Official Manual's "Background and Building of the Hotel Governor."

The dominant hotel catering to politicians had been the Madison Hotel, at the southwest corner of Capitol Avenue and Madison Street. The Madison Hotel also served as a state convention site for both political parties.

Howard Cook, president of rival Central Trust Bank, was a strong supporter of Stephens, who was the Exchange National Bank board chairman.

"Because of state conventions and for dozens of other excellent reasons, Jefferson City hotel facilities are not nearly ample at the present time," Cook wrote in a 1940 letter to a potential developer. "Many other gatherings, large and small, would naturally come here, if comfortable hotel accommodations could be obtained."

It was another 10 years before developer Bill Berberich offered to build and operate a 145-room hotel for a minimum of $2 a night, and a banquet room seating at least 400 - only when Stephens' committee had acquired the site free of encumbrances.

Stephens organized the campaign to raise $90,000, knowing that many Jefferson Citians saw the hotel benefiting state government more than the average citizen.

The Rathskeller, a bar in the basement, became known as the "third chamber," as legislators and lobbyists transacted much business there and in the Hotel Governor lobby.

It also received the moniker "Passion Pit" because it was a frequent romantic rendezvous, as well, Kramer's story accounted.

However, it was not open to blacks, even those who had been elected to state seats. Black legislators stayed in private homes or in dorm rooms at Lincoln University. That continued from 921, when Walthall Moore served his first term representing St. Louis City, until the late 1960s when Jefferon City passed a public commodations law. onstruction of the concrete post-and-beam building began in March 1941. It was completed in September 1942 following delays caused by a shortage of steel, as well as skilled and unskilled labor as the United States entered World War II.

A new lease on space

The massive art-deco building served as the gathering spot and as a streetscape icon for five decades, until closing in the late 1980s, according to Tracey Berry in "A Credit to History" in the Missouri Resources Summer 2001 edition.

The hotel stood vacant for more than a decade after the City National Savings and Loan acquired it in foreclosure.

Weather and time took its toll.

Cohn said he was stunned to find that such a grand structure with a practical location would be allowed to fall into such "horrible disrepair," with collapsed ceilings and walls, dead pigeons and broken glass.

In talking with local people, it was apparent that the building "held a special place in the community's heart," Cohn said. "We tried to preserve as much of the hotel-feel as possible."

Originally constructed for approximately $700,000, the hotel was renovated at a cost of $15 million.

Mel and Jean Carnahan occupied the Governor's Mansion in 1993, when they asked the Office of Administration to resolve the eyesore.

City National eventually donated the building to the city with the understanding they would hand it over to a developer, who would replace or renovate it and lease spaces back to state government.

Cohn said the history that occurred within the building was more valuable than its architectural features, but it was worth saving using federal and state historic preservation tax credits, as well as Brownfield credits for asbestos abatement.

The credits helped raise nearly $6 million toward the restoration, which preserved the historic integrity of the exterior and the main lobby, such as the marble wainscoting, terrazzo flooring and stainless steel stair railing.

The original-look aluminum windows were a key factor in preserving the exterior of the blocky, red brick and limestone structure, Berry recounted.

The guest rooms and remaining interior were modernized to safety and accessibility standards, as well as providing updated infrastructure and technology.

Cohn was able to salvage the ballroom floor and installed retrospective light fixtures to capture the 1940s feel in what is now used as a conference room.

The eight-story hotel was converted into a 10-story office building by lowering the basement floor, adding two levels below the lobby.

The 6-foot-tall, rooftop letters that dominated the Jefferson City skyline for so many years announcing the hotel's location also came down.

Before opening in September 2000, the 100,000-squarefeet property was filled to capacity.

A few other tenants have taken space in the Governor Office Building, many with government ties.

"There has never been a vacancy since the building opened in 2000," Cohn said. "Tenants moved, but only because they wanted more space that I did not have.

"There was always an existing tenant or new tenant ready to take the space."

Cohn said he hopes this rehabilitation of a local historical gem would encourage others to do the same.

The three-year project was named a city Landmark in 2001 and received the Missouri Preservation Award for Institutional/Civic Building Restoration in 2002.

Historic buildings are "more than pieces of brick and mortar, but pieces of Jefferson City history," Cohn said. "I'm proud to have a part in preserving this historical corridor."