Historical society building has history all its own 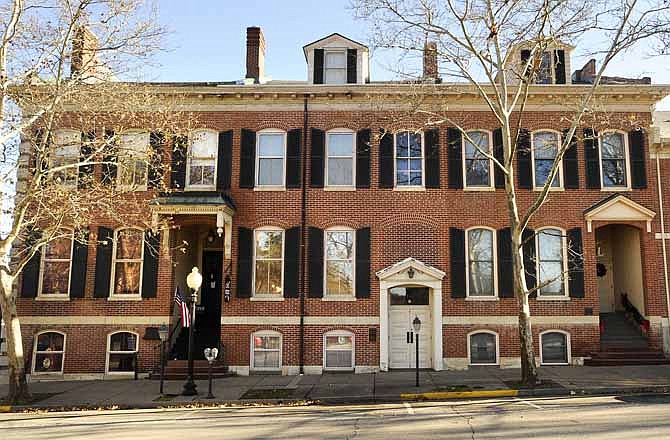 Reconstruction and repurposing could sum up the lasting contributions made by Missouri's 20th governor.

Benjamin Gratz Brown pulled together a wounded and divided state following the Civil War, after being elected governor in 1870 representing the newly formed liberal Republican Party. Brown even received support from the Democratic Party which did not propose a candidate that year.

Brown was involved in the detailed planning and construction of the current Governor's Mansion. He even advanced more than $20,000 personally toward the construction.

Across Madison Street, Brown had three Federal-style row houses built by St. Louis architect George Ingham Barnett, also the mansion's designer. The 100-block lot was home to the log house where his wife was reared. And today 109 Madison St. is listed on the National Register of Historic Places.

He built several other commercial and high-density residential buildings in town during his tenure. The stones from the former governor's mansion were used in construction at the Missouri State Penitentiary.

With a fiery personality, Brown was either loved or hated for his views. On several occasions, Brown was challenged to a duel. In 1855, he participated in Missouri's last political duel with Thomas Reynolds, who later was governor-in-exile during the Civil War. Reynolds left Brown with a lifetime limp. The trigger from Brown's pistol in that duel hangs in the B. Gratz Brown Room at the Cole County Historical Society, which is housed in two of the three row houses he had built.

His wife, Mary Gunn, was the daughter of former Jefferson City mayor Calvin Gunn, who also was Missouri's first official printer and editor of the Jeffersonian Republican.

Brown met Mary in 1858 when she was age 15, swinging in front of her family's log home on Madison Street. He was a 32-year-old St. Louis legislator at the time, and they were married within three months.

Most of the items in the Brown room were donated by the couple's children and grandchildren.

He was the grandson of two U.S. senators, born into a wealthy Kentucky family and graduated from Yale law school.

His Missouri connection began in 1849, when he joined his cousin Frank Blair at a law firm in St. Louis. By 1852, the short redhead was elected to his first of three terms in the General Assembly. He also was editor of the St. Louis newspaper, the Missouri Democrat.

Brown attended the newly formed Republican National Convention in 1860, which nominated Abraham Lincoln to be president.

During the Civil War, he organized and commanded a volunteer regiment. Then, he was appointed in 1863 to fulfill an unexpired U.S. Congress term held by a secession-supporter.

In his 1869 campaign for governor, he promoted universal voting rights and amnesty for southern sympathizers.

"He's the coolest of all the governors," said society librarian Ann Gue. "He's the only governor with his own (archival) box here ... he also caused more friction than anybody else.

"People may not have liked him, but he got things done."

The historical society bought the B. Gratz Brown House, 109 Madison St., in 1946 to preserve a city landmark and as a place to display valuable collections, including furniture and decorations saved from the mansion of the city's first mayor, Thomas Lawson Price. The mansion was razed to make way for the Missouri Supreme Court building.

"It adds to the history of the building because he's the one who built it," library volunteer Geri Rozier said of the many Gunn-Brown family items on the second floor.

Presumption holds that Brown would have stayed for a time at 109 Madison during his gubernatorial term, as the former mansion was razed in October 1871 and the current mansion was not ready for occupancy until January 1872.

The three row houses were divided and sold separately after May 1881.

"The urban row house of this period opening directly onto the street is a rarity," said the 1969 National Register nomination.

In 1999, influential board members privately purchased and donated 111 Madison St., doubling the museum's space for the James library, the DeLong Room for the governors' wives' gowns and the McHenry Civil War Room.

The Margaret Upschulte House was relocated from 327 W. High St. to behind the society museum in April 1980. The traditional, German-style brick home thought to be built about 1865 was listed on the 1976 Missouri State Capitol Historic District National Register nomination.

A wooden structure removed from the house, at its original location across from St. Peter Catholic Church, in the 1920s is reportedly the site of the first Catholic Mass celebrated in Jefferson City in 1831.

In recent years, the society created a brick and ironwork courtyard, updated the Upschulte House to host private gatherings, and added an elevator to the four-story museum.

For nearly 70 years, the society has been preserving local history and making it available to the public at this location.