F-bomb makes it into mainstream dictionary 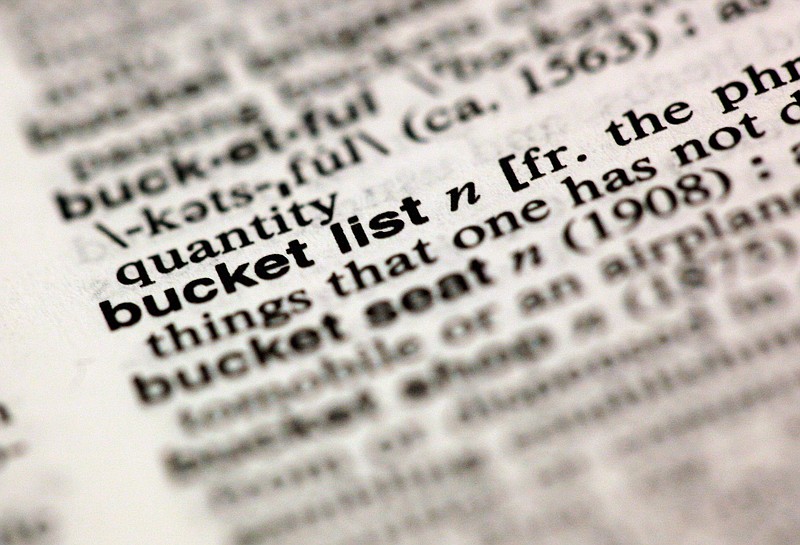 The entry "bucket list" is one of about a hundred new additions in the 11th edition of Merriam-Webster's Collegiate Dictionary.

The term "F-bomb" first surfaced in newspapers more than 20 years ago but will land Tuesday for the first time in the mainstream Merriam-Webster's Collegiate Dictionary, along with sexting, flexitarian, obesogenic, energy drink and life coach.

In all, the company picks about 100 additions for the 114-year-old dictionary's annual update, gathering evidence of usage over several years in everything from media to the labels of beer bottles and boxes of frozen food.

So who's responsible for lobbing F-bomb far and wide? Kory Stamper, an associate editor for Merriam-Webster, said she and her fellow word spies at the Massachusetts company traced it back to 1988, in a Newsday story that had the now-dead Mets catcher Gary Carter talking about how he had given them up, along with other profanities.

But the word didn't really take off until the late '90s, after Bobby Knight went heavy on the F-bombs during a locker room tirade.

"We saw another huge spike after Dick Cheney dropped an F-bomb in the Senate in 2004," and again in 2010 when Vice President Joe Biden did the same thing in the same place, Stamper said.

"It's a word that is very visually evocative. It's not just the F-word. It's F-bomb. You know that it's going to cause a lot of consternation and possible damage," she said.

Many online dictionary and reference sites already list F-bomb and other entries Merriam-Webster is only now putting into print. A competitor, Oxford University Press, has F-bomb under consideration for a future update of its New Oxford American Dictionary but beat Merriam-Webster to print on a couple of other newcomers: mash-up, added to the Oxford book in 2005, and cloud computing, included in 2010.

No worries, Stamper said. The dictionary biz isn't a race.

Merriam-Webster's Collegiate gets a cover-to-cover overhaul every decade or so in addition to yearly upgrades. The Springfield, Mass.-based company also picks a defining word of each year closer to Thanksgiving. Among the company's other additions this year, including online at Merriam-Webster.com, and various apps:

The Oprah-inspired "aha moment," the Stephen King-popularized earworm, as in that truly torturous tune you can't get out of your head, and man cave, brain cramp and bucket list.

King, in a 2009 column for Entertainment Weekly headlined "The Trouble With Earworms," wrote of waking up in the middle of the night for a glass of water when he found himself singing a snippet of a lyric.

"My friend the Longhair says that's what you call songs that burrow into your head and commence chewing your brains. The dreaded earworm can turn even a great song into something you'd run from, screaming at the top of your lungs. If only you could," he wrote.

Stamper said the word, a translation of the German ohrwurm, surfaced in English in the late '80s as a way to describe untranslatable words. As a tune that won't leave your head, "It just solidified itself in the national linguistic consciousness in America," she said.

Earworm isn't actually a new word for Merriam-Webster but the definition is to differentiate from the once-sole description of a specific blight on ears of corn.

There are a few of those this time around: copernicium among them.

It's a short-lived, artifically produced radioactive element that has 112 protons and is the most recent addition to the Periodic Table of Elements. It was first created in a German lab in 1996 and named for the astronomer Copernicus.

The recession blues are represented.

Merriam-Webster added "systemic risk" and a new definition for "underwater," to describe the heartbreaking realization you owe more on your mortgage than your property is worth. Among other new economic terms is an extra definition for "toxic," as it relates to an "asset that has lost so much value that it cannot be sold on the market."

Flexitarian, traced to 1998, is defined as "one whose normally meatless diet occasionally includes meat or fish," while obesogenic (dating to 1986) is an adjective for "promoting excessive weight gain: producing obesity."

Stamper calls flexitarian one in a long line of "you are what you eat" entries.

"As our society has become more aware of our eating patterns, we've seen a proliferation of its use," she said. "There are people who object to the very idea of being a flexitarian, and therefore to the existence of the word."

"Let them find their own new words," he joked. "It's not a cutthroat business but we like to say it's a bare knuckles business." Morse did acknowledge: "It's harder for some paper dictionaries to stay in business in the era of online dictionaries."