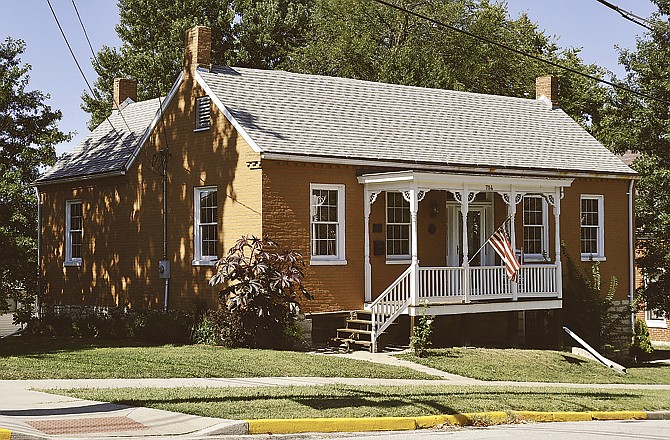 The Hess House at 714 Washington St. is one of the many German homes in Jefferson City's Old Munichburg neighborhood.

Most of the homes still standing today that existed in Jefferson City during the Civil War are grander homes of prominent community leaders.

A simple, distinctive German home at 714 Washington St., the Hess House witnessed the War Between the States while the immigrant neighborhood grew quickly around it in the early 1860s.

"It is an example of an ordinary person's house that has been beautifully preserved," Walter Schroeder, president of the Old Munichburg Association.

The one-story brick home with a gable roof was built on a limestone foundation by Wendelin Buehrle in about 1860, Bening said.

Exterior walls are made of hand-pressed brick on a limestone foundation. Originally built in an L-shape, an addition was made in 1890 to both stories, creating today's rectangle shape.

"It is one of the most intact examples of the early Missouri-German vernacular style in (Old) Munichburg," said Carolyn Bening, Historic City of Jefferson member.

Philipp Hess, who bought the home in 1864, told his children stories of Civil War battles fought on his property, of battle trenches down the street, and of a et hole in a neighr's front door, Benng said.

As a charter member and officer of the German Evangelical Cenal congregation, ich formed in 1858, pp Hess would have taken part in congregational actions, Scroeder said - like, in 1861 when the congregation immediately placed a Union flag in front of their church building when the Civil War began.

"I suspect Philipp Hess, as did other members of the congregation, helped Pastor Rieger care for sick and wounded in the parsonage across the street, and gave aid to former slaves coming across the river into Jefferson City from Callaway County and refugees from bushwhacking," Schroeder said.

The home's current owner, Megan Wadley said she suspects the German immigrants were more preoccupied with day-to-day life - taking care of their families and building their community - than with the war at the time.

Three generations of the Hess family lived in the house, across the street from the neighborhood's heart - the church.

Philipp Hess purchased the house for living quarters above his basement-level grocery store and meat market, Bening said. He traveled throughout the city with his meat wagon, selling his prepared sausages, hams and bologna.

His daughter Alma Hess, with her husband, Victor Heinrich, and their two daughters moved into the home after the death of John Philip's wife, Caroline.

Gladys Gladden, Alma's daughter, lived there from the age of 5 until she graduated.

In those days, the Evangelical church was center of the neighborhood and Gladden grew up in the middle of it.

"I was always on time to church, we'd go when the bell was ringing," Gladden remembered.

Like the many children in the South Side, Gladden and her sister Juanita attended the Broadway School, only two blocks away. She remembered receiving rewards from neighboring businesses like Coca-Cola and Central Dairy for good school work.

"It was a lovely little community with friendly neighbors," Gladden said.

A "sweet lady" in the neighborhood was known for bringing good foods to those who were sick, Gladden said.

Her grandmother fixed a special orange drink for after nap-time and her grandfather would walk home with a chilled watermelon on hot, summer nights.

John Philip Hess often could be found sitting on a big bench in the front yard of an evening, smoking his pipe and reading.

Her grandparents kept a big garden and beautiful flowers. Gladden recalled picking cherries for pies and preserves from the trees in the yard.

"I think Grandpa would be real excited," Gladden said about the city Landmark designation. "It is a heritage."

Just as the Hess House was a gathering place for Gladden's family, as well as members of the evangelical congregation, Wadley's friends and family find it a great place to watch Independence Day fireworks and enjoy the annual Oktoberfest.

And she and her rescue dog Scottie now enjoy the space and neighborhood, too.

"Everyone relied on each other," Wadley considered of the early South Side years. "It was a full German community.

"They uprooted and brought the best of their culture here, and made it better - that's kind of what this house is."

Wadley said she can see how each room was used as a family space, with wood-burning stoves and no electronic media.

"It must have been full of people noise and a family," Wadley said.

Moving from a 500-squarefeet studio apartment in Santa Monica, Calif., Wadley said her first goal was to buy a house - a new house. Unsure why she agreed to look at the 150-year-old house, Wadley said she decided on the home after learning of its history.