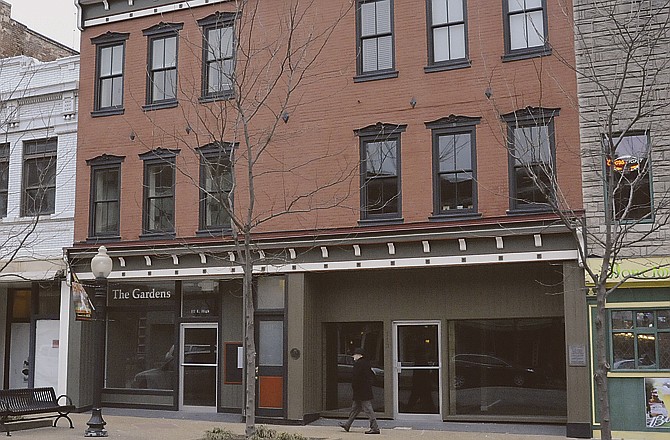 What might storefront owners or those living in the rooms above have seen in the early 1860s, when the combination building at 111-113 E. High St. is thought to have been built?

The Capitol City was in the midst of the Civil War and tenuous times. And that block of High Street was the commercial hub.

Today, owner Jay Jordan's properties again look out on a burgeoning downtown retail center with many community activities and events that draw visitors back to the heart of the city.

Part of the returning vitality of the original business district is the residential component.

Jordan's properties offer four apartments, with unique views of the Capitol and the Governor's Mansion from the back decks and of the downtown streetscapes from the front windows.

Growing up with the Empire State Building in view from is childhood home, Jordan said he is used to downtown living.

"It's neat; it's where the action is," Jordan said. "With restaurants, bars and gathering spots within a walk of two blocks, this is the place to be."

"I'm not a native Jefferson Citian, but I love this town," Jordan said.

Forty-five years ago, Jordan moved to Jefferson City with everything he owned in his back seat. And the Capitol City has been good to him ever since, he said.

In addition to the 2008 Landmark award, Jordan's properties were recognized by the Missouri Preservation Alliance with the Caplinger Award.

"People are starting to realize that vacant second and third stories are a waste of money," Jordan said.

For decades before he purchased 111 in 2004 and 113 in 2007, the upper stories served as sundries storage or were otherwise vacant.

But the very first thing he did to his new property was remove the exterior, aluminum "cookie cutter" panel, thanks to the city's facade improvement program and state and federal historic preservation tax credits.

The door to the upstairs apartments had been closed off to create a display area years ago, Jordan said. The original pressed, metal tiles had been punctured and abused as modifications were made to the building along the way.

So installing replica tiles was one of many efforts Jordan made to retain the 19th-century feel of the property.

He referred to an 1880s outside photo of the property, which has served as a general mercantile, a saloon, a meat market, a saddlery, a shoe store, and a dry goods and ready-to-wear shop.

The tall, Italianate windows and bracketed cornices were restored to near original. However, a centered, iron balcony, removed in the 1960s, was not replaced.

The entire building received new wiring, plumbing and HVAC, as well as structural reinforcement to comply with present-day codes, including the addition of fire escapes.

"This impressive restoration of a downtown business storefront adds greatly to the aesthetics of Jefferson City's downtown streetscape," the city Historic Preservation Commission noted in its 2008 Landmark awards.

A permanent plaque on 113 E. High St. pays tribute to the Heinrichs, who were merchants and owners there in the first part of the 20th century. They left the building in a trust to benefit the community with any proceeds, said Sam Bushman.

Funds have primarily helped with prescriptions and other health-related requests, which are made through the trust. After the sale, the interest will continue to support community causes.

"It's neat; there are really a lot of people who have been generous to our community," Bushman said.

Most of the downtown buildings would qualify for the city Landmark, Bushman noted.

As a downtown business owner, Bushman said he is pleased with the many property owners who have made efforts to restore the original character of the century-old streetscape.

The downtown storefront offers good exposure, which is key for businesses like Linda's Studio, which will move into one of the spaces this month.

"As a visual business already, we need the visibility of the windows," Nichols said.

In the preservation vein, Nichols will use original doors discovered in storage on the property for displays.

"I believe in Jefferson City," Nichols said. "What better time to move downtown than when people are restoring the buildings?"