Jefferson Street landmark has seen a variety of tenants 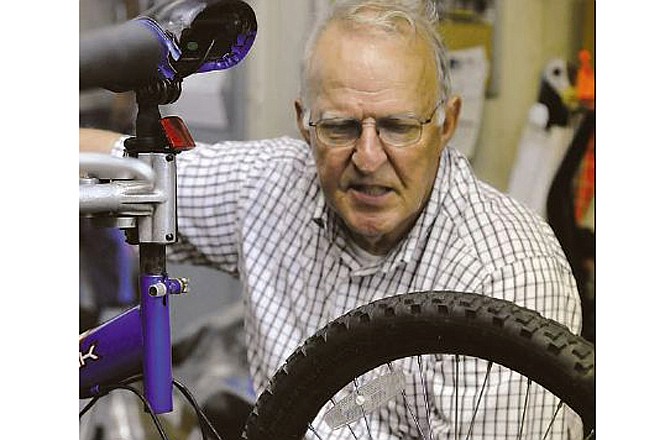 Today, Whitton Expressway is a block away, several commercial buildings have been removed and yet Jefferson Street continues to be a busy thoroughfare.

"It's changed quite a bit," Meyer said.

And the bicycle business was pretty straightforward in 1973 at 610 Jefferson St., which was named a city historic Landmark by the Historic Preservation Commission last month.

Sizes have mushroomed, he said. Tires used to be solely measured by diameter and now they have different widths, too. There are thorn-resistant tubes, tire liners, belted tires and other unique technologies.

As for his business, the variety has grown and so has the competition.

"When I started, there was no such thing as a mountain bike or a hybrid," Meyer said. "We had road bikes and children's bikes in 1973."

Indoor exercise bikes came out in 1980. And better machines have evolved since then.

"That was very good for us because winter slows us down," Meyer said.

Today, Meyer's shop is filled with a variety of parts and bicycles, with different wheel sizes, specific designs for individual preferences, and accessories like trailers and child seats.

"It's been a fun business," Meyer said.

With rising gas prices, Meyer said he expects to see an increase in bicycle use.

And people are getting outdoors more, too, he said. The Katy Trail development and the recent opening of the Missouri River pedestrian/bike bridge have been helpful.

Recumbent-style bicycles, which have a seat lower to the ground and use leg motion pushing forward rather than up and down, are the latest interest.

"We're a family store; we help anybody from a 2-yearold's baby seat to a 92-yearold's Aerodyne," Meyer said.

For the past four decades, the site has been home to Meyer's bicycle shop.

For about the first four decades, it was the Western Steam Bottling Works.

Bottled mineral waters were popular toward the end of the 19th century. They were both a "soft" drink alternative to "hard" alcoholic beverages, and also were perceived to have curative powers, said Walter Schroeder, president of the Old Munichburg Association.

William Roesen began bottling this mineral or soda water for individuals to take home, as opposed to the "soda fountains" commonly found in drug stores. His business began in the mid-1880s in the 300 block of Madison Street.

In 1888, Roesen bought 610 Jefferson St. from W.W. Wagner, who operated the Wagner Brewery located behind that lot. Roesen then built the two-story building with a full basement for his Western Steam Bottling Works.

His business, along the south side of Wears Creek in the German-settled Muenchberg, was successful, Schroeder said. It also joined a cluster of brick buildings surrounding the intersection of Jefferson and Dunklin streets, which was emerging as the commercial core of the South Side.

His successes led him to other business ventures like forming the Jefferson Mining Company with W.W. Wagner and Louis Lohman, and serving on the board of directors of the Exchange Bank.

A.W. and Bertha Happy, who was the daughter of Jacob Moerschel, owner of the adjacent Capitol Brewery, bought the property and business from Roesen in 1910.

Increasing national competition, easier access to sodas in a social setting at pharmacies, and the decline of mineral water's popularity as medicinal contributed to the disappearance of the Western Steam Bottling Works by the mid-1920s, Schroeder said.

The building became headquarters to Otto Hotschneider's contractor business and his home on the second floor. Before his death in 1944, Holtschneider added the retail storefront facade.

From 1930-73, the second floor remained an apartment while the retail space housed several businesses including a tire shop, an awning manufacturer, an army and navy surplus store, Howerton Electric Company, and State Farm Insurance Company.

The 1995 Urbana Group architectural/historic survey, commissioned by the city's Historic Preservation Commission, identified the building as eligible for nomination to the National Register of Historic Places.

The building at 610 Jefferson St. is one of 10 city Landmarks in the Old Munichburg neighborhood.

"The J&D Bike Shop (is) really a hidden historical jewel," Schroeder said. "It's not at all fancy architecturally, just functional and extremely sturdy. After all, it was built as a factory, not a retail store."