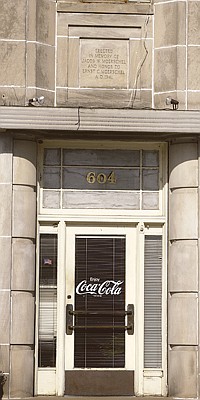 The Coca-Cola building at 604 Jefferson St. in Jefferson City is this month's Landmark Award recipient.

The large sign on Whitton Expressway has come to be a community symbol. And this week, the Cops on Top fundraiser for Special Olympics Missouri showed how the site also has created traditions.

When the Jefferson City Coca-Cola Bottling Company put up the sign in the 1980s, little did they know how much community organizations would rely on its promotion for upcoming events, said vice president Emily Talken.

"We thought it would be something nice," Talken said.

More than just the iconic marquis, the centennial, family-owned business at 604 Jefferson St. is a historic Landmark. The city recognized it as such in 2008.

"We thought it was wonderful to be recognized," Talken said.

Speaking on behalf of her Vogel siblings, "there's a pride to have the same business operated by your greatgrandfather, your grandfather, your mother," she said. And now the fifth generation has stepped into the business with Jake Vogel, Talken's nephew and son of Carl Vogel.

"In this day and age, there's a concern whether you'll survive with your legacy," Talken said. "But if we've been here since 1892, I think we'll continue to be."

The nature of the family business has evolved as the generations have passed - first a brewery, later soft drinks, and for a time coal and ice. And the company name has changed too from Capitol Brewery in 1892, to Moerschel Products in 1922 to Jefferson City Coca-Cola Bottling Company in 1944.

Jacob F. Moerschel originally bought the brewery business - located in the same block but facing Dunklin Street - from the Wagner family in 1892, who had bought it from the Gundelfingers. In other words, a brewery had been an anchor for the South Side block since at least the 1860s.

But the Volstead Act forever altered that commercial outlet. In 1922, the company emphasized diversification with soda, ice, coal and coldstorage for local grocers and meat.

When Prohibition was repealed in 1933, the business briefly returned to the brewery business. But competition was great, and that part of the business ended in 1947, according to "Heartland History."

That did instigate the construction of today's Landmark in 1941, as the Atlanta-based Coca-Cola parent company, which disapproved of their product being bottled in the same area as a brewery creating risk of yeast contamination.

Though they no longer bottle the product, the building remains the company headquarters, with the distribution services housed behind the historic facade.

John Schaper was architect to the art-deco design, built with help from Pope and Ed Kuehn construction companies.

It was built according to the fourth building design for franchise bottlers adopted in 1929 by the Standardization Committee of the Coca-Cola Company of Atlanta, according to city records.

The design includes the prominent Coca-Cola logo with bottles in high relief on the front facade, above the bottling room, and on the north facade.

A departure from the mandated design is the cornerstone above the front entrance lintel that proudly bears the inscription: In Memory of Jacob W. Moerschel and in Honor of Ernst C. Moerschel A.D. 1941, city information said.

"The building is unusual, if not unique, by not being supplied with city water," the city records said.

In addition to providing jobs in the community for more than a century and serving as a constant commercial center in the Old Munichburg neighborhood, the family business has taken its role seriously by giving back in the form of the billboard advertising, donated products and other signage and gifts through the years.

"We've always been generous in sharing with our community," Talken said.

The generosity has been passed down from generations, too. One grandmother gave of her wealth and the other of her deeds, Talken said.

"We've had a presence in the community a long time," Talken said. "We've always helped out or supported community events to the best of our ability."