St. Peter School served generations of students - and even some state lawmakers 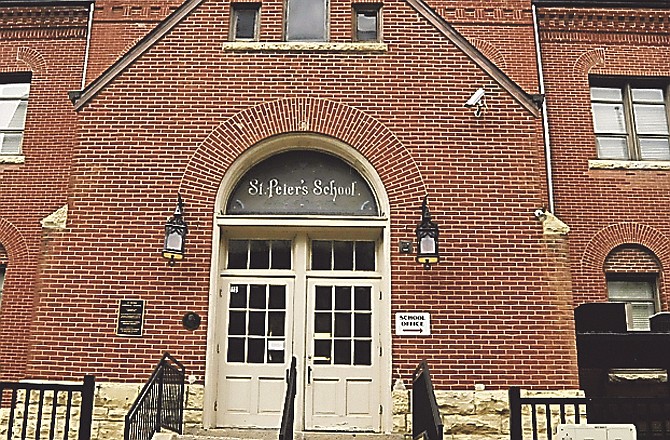 The old front of St. Peter Catholic School has been designated as a Landmark of Jefferson City.

As it begins the 158th year of education, St. Peter Interparish School in Jefferson City prepares its students for the future with means like its computer lab.

But the parochial school's oldest building, where the lab is, also houses a piece of the community and state's history.

A century ago, the second floor was known as St. Peter's Hall. It was the largest assembly hall in the area, with an auditorium and a large stage.

After fire destroyed the second Capitol in February 1911, the House of Representatives held the remainder of the 46th General Assembly in St. Peter's Hall.

Students attended classes in private homes to accommodate the state's need. And the Senate met in the Supreme Court Building.

The original portion of the present school was erected in 1890. It was the third building for the school and was designed by Frank Miller, the architect of the Cole County Courthouse, and constructed by H.J. Wallau at a cost of $16,500.

After the Selinger Center was constructed in 1937, the second floor assembly hall was converted into a large library and two classrooms, and in more recent years a computer lab.

The school was included with the church in the Missouri State Capitol Historic District nomination on the National Register of Historic Places in June 1976.

When the original little church was built on High Street in 1846, a parishioner taught parochial classes in his home free of charge.

The first school was built in 1854. However, by 1858, more room was needed and the first St. Peter Church became the second school building.

The School Sisters of Notre Dame arrived from Wisconsin in 1868.

And in 1931, St. Peter High School opened, with accreditation through the University of Missouri, a four-year program in a new addition to the school.

The Christian Brothers arrived soon after.

The post World War II population explosion caused extreme crowding. Catholic parishes in the area combined their efforts and resources into the construction of a new high school.

The Vogelweid Learning Center opened in September 1964 to serve children with special needs.