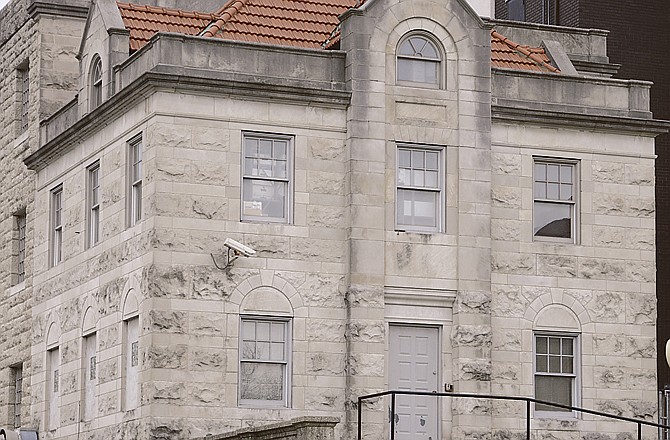 The old residence for Cole County sheriffs who once lived on-site is located on Monroe Street in Jefferson City.

Probably quite a grand perk to the job of county sheriff in the 1930s, the two-story limestone home was built adjacent to his workplace.

The Cole County Sheriff's House was built equal to other prominent homes of the era, like along Moreau Heights, said jail superintendent Russ Bemboom. And the wives often served as cooks for the Cole County jail.

"It's scary to think of raising a family next to the jail," Bemboom said.

But historically, sheriff's residences were connected with county jails. Over the years, that has fallen out of favor and now only a few counties in Missouri still retain the once-common structures, said Steve Veile, president of the Historic City of Jefferson.

The Missouri Preservation Alliance added the Cole County Jail and Sheriff's House to its 2010 Most Endangered Historic Places List. And the city's Historic Preservation Commission named the property a local Landmark in 2010. But it has been listed on the National Register of Historic Places since 1972.

Last year, the Romanesque Revival-style buildings were rumored to be considered for demolition when the new prison opens this spring. The Cole County Commission has set aside $1 million to be used for the old jail, as part of the approved law enforcement sales tax.

"This is a beautiful old building," Bemboom said. "But what do you do with an old jail?"

The 20,000 square feet will continue to be used for sheriff's department business.

The 1936 addition was designed to blend with the courthouse, built in 1894.

Just as the jailers in the early 1930s looked forward to moving into the better facility, which is the current location, today's staff anticipates taking control of the High Street facility, Bemboom said.

"I'm sure their transition here was as big as our will be," Bemboom said.

From the old city jail, which once stood at the southeast corner of McCarty and Monroe streets, to the current facility, inmates went from being chained to rings on the wall in one large room to having individual beds and the ability to walk around behind bars.

The earliest Cole County jail Bemboom has heard of was a hole in the ground near Marion, which required a ladder to be lowered for the inmate to get out.

The reasons for incarceration have changed through the generations.

When Bemboom's grandfather was a city policeman during the Great Depression, the most likely reason had to do with alcohol.

Today, it's not bootlegging, but chemical abuse does account for a high percentage of the inmates. Even if they're not charged directly for substance abuse, it might be the root cause, like stealing to feed their habit, he said.

During the Depression, Bemboom's grandfather told stories of being tied at the waist by a rope as he would go underneath the railroad buildings in the Millbottom to clear out hobos.

When Bemboom started at the jail 25 years ago, cellphones and video games were not around. Now, they get basic cable television.

One time Bemboom had an inmate whose father once served as sheriff and his family lived in the house, where he fell out of the second-story window and broke his arm.

He's also seen three and four generations of a family locked up at the same time.

Several years ago, for a brief time, the Cole County Jail was ranked fifth in the nation among jails for having 33 percent of its population charged with murder.

"But the people we have the most difficulty with are not the big crime (offenders)," Bemboom said.

Staffing for the jail before the 1980s consisted of only one officer on an evening shift, who also served as dispatcher, Bemboom said. That meant when officers in the field needed to check-in and the jailer was doing cell checks, no one was there to receive the information.

The jail currently can hold 48 inmates.

The average stay is four days. But the majority of those booked into the jail are released within eight hours. Then others will stay up to 16 months.

Some inmates await their felony trial date and others may be serving their misdemeanor sentence.

"We are an integral part of county government," Bemboom said. "As the county grows, we grow." The original entrance to the jail is visible from Monroe Street, set back from the front walls of the sheriff's house and the courthouse and behind utility boxes.

Inside, the 1930s heavy wooden door hangs with cell bars in front of it.

"It was a very pretty entrance to the jail," Bemboom noted. The original locks still do the job, even thought the patents were filed in the late 1800s.

During the 1986 renovations, Bemboom, with the help of some inmates, removed plaster in the sheriff's office to reveal the original quarried limestone wall and a brick archway.

"I thought it looked great with the history of this old building," Bemboom said.

Under Bemboom's watch, approximately one-third of the jail's history, building a rapport built on trust and respect has been a key to inmate care.

"We treat them firm and fair," Bemboom said.