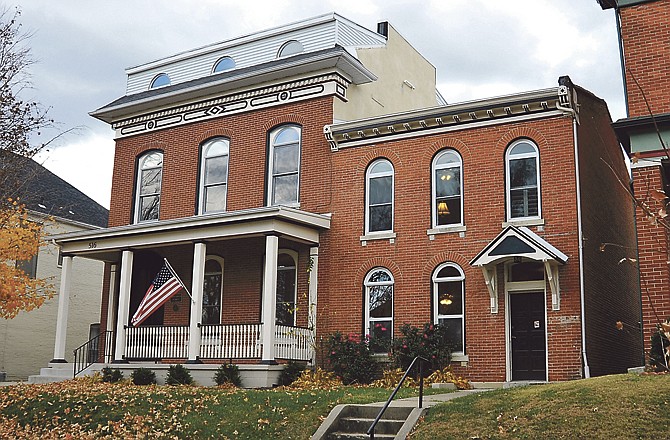 Dr. Robert Young lived in the home at 516 Capitol Ave., left, during an interesting period of Jefferson City's history. As a teenager, he served with Capt. M.M. Parson in the Confederate Army, then returned to Jefferson City after medical school. He was the author of a series of columns in the People's Tribune at the turn of the century.

As redevelopment of the Missouri State Penitentiary grows in momentum, so the neighborhood surrounding it will see revitalization too.

But this is not the first time the neighborhood has seen a facelift.

"They're old," historian Jane Beetem said of today's Capitol Avenue homes. "We just assume they were the first houses on the lots."

Dr. Robert Young's home at 516 E. Capitol Ave. was built by his father in 1872, just as the majority of homes along that stately road were after the Civil War. In May, that building joined nine others, including his father's at 512, along Capitol Avenue which have been named city Landmarks.

The German-style architecture seen in the 1869 Bird's Eye View map of the streetscape fades quickly in the post-Civil War era. What may be the only remaining pre-Civil War home is the Parsons House, once one of several adjacent family homes in the 100 block of Jackson Street.

"These were two determined families with a strong southern presence who anchored Capitol Avenue," Beetem noted.

The Young family's three homes were around the corner from this strong southern family.

"It's clear from the map there was a change in history," Beetem said. "The question is why?

"The tension after the war may have played out in the neighborhood.

"The Missouri-Germans, who were most likely pro-Union, probably sold out and the prison factory owners moved in."

W.C. Young was a contractor and judge in the Cole County court for three terms in the 1800s. That could have meant he served more in the role of what today is a county commissioner, Beetem said. And he also was an officer for the fledgling Lincoln Institute board.

As a contractor, W.C. Young built three houses on Capitol Avenue - 504-506, 512 and 516. A well-respected businessman, his handiwork also was part of the original Capitol and the Price mansion, which sat where the Supreme Court building is today.

So Dr. Robert Young grew up in a well-todo home, Beetem said. He retold many of his growing up days in a series of columns for the newspaper at the turn of the 20th century, which have been published in a hard-to-find book title "Pioneers of High, Water and Main."

"The book allows Dr. Young to speak to us today," Beetem said. "We benefit from his thoughts and reflections from a very interesting part of Jefferson City's history."

Dr. Young was a junior at what is now University of Missouri-Columbia when the Civil War broke out. He dropped out of college to serve under his family's neighbor Gen. M.M. Parsons in the Confederate Army.

"I'm sure his parents felt better that he was going with people they knew," Beetem said.

Like the Young family, the Parsons family lived in several homes along the 100 block of Jackson Street.

When Dr. Young returned from the war, he resumed his education. He served as physician to Gov. John Marmaduke and was assigned as superintendent of the Nevada State Insane Asylum.

The elder Young's home at 512 E. Capitol Ave. was named a Landmark in 1999 under the name Ephriam B. Ewing House. And the neighboring 504-506 property probably was built by the elder Young as a speculation house, she said.

"These homes in the 500 block - they serve as an anchor of the south portion of Capitol Avenue," Beetem said. "They almost serve as an entrance to the neighborhood.

"Without them, you would lose a significant part of the neighborhood."