Jefferson City National Cemetery replete with history, above and below ground 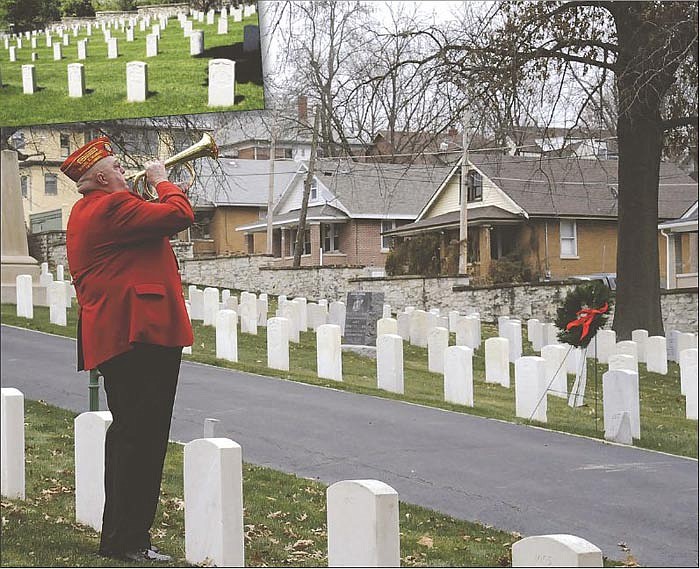 ABOVE: Greg Craig played Taps at the National Cemetery on East McCarty Street in December 2009 as Wreaths Across America laid wreaths for all six branches of military service and the POW/MIAs in a simultaneous event across the United States.

Come May 31, each of the grave sites marking local veterans also will have an American flag waving near it.

This city Landmark also is a memorial, where each Memorial Day the Jefferson City Veterans Council hosts a two-bell ceremony to honor veterans who have died.

Although the cemetery is closed to new applicants for burial, it has stories to tell.

Many stones say "unknown soldier" or the servicemember may not have a headstone, but only a 12-inch marker with a number.

Under a shade tree near the middle of the cemetery, a 15-foot-tall obelisk stands in front of a grassy clearing, where the remains of 79 Union soldiers were reburied in 1873 as a permanent resting place for those who died at the hands of Confederate guerilla Bill Anderson and his men.

The 39th Regiment Monument honors Companies A, G and H of the Missouri Volunteer Infantry regiment.

The names of the soldiers killed Sept. 27, 1864, in a fight with rebel bushwhackers at Centralia are inscribed on each side of the obelisk.

That day, Anderson and about 350 men plundered the depot and houses of the village of only 100. Then they attacked a passenger train, killing 23 discharged and furloughed Union soldiers and abusing the other 125 passengers.

Union Maj. A.V.E. Johnson and his 39th Infantry reached Centralia that afternoon, but they were mostly new recruits and illequipped. Johnson ignored warnings about Anderson's cunning and pressed an attack in an open prairie, where in just two minutes 108 of his 122 volunteers, including Johnson, were killed - only two of Anderson's men died and three were wounded.

The monument was erected in 1868 at the original burial site near the Centralia railroad station and later relocated to the National Cemetery.

Perhaps the most notable veteran buried there is Pvt. Logan Bennett, who served in the 65th U.S. Missouri Colored Infantry. Interred Oct. 15, 1933, with his wife buried beside him, Bennett was one of the original founders of Lincoln University and for whom Bennett Hall is named.

Burials first date back to the summer of 1861. Originally, the cemetery was to be a burial site for Mid-Missouri Civil War soldiers. Israel and Mary Read sold the site to the government. But it was not officially designated as a national cemetery until 1867, after approximately 350 interments were completed.

This National Cemetery is unique in that War Between the States veterans are buried together, regardless of which side they fought on.

The cemetery became a city Landmark in 1994 and was listed on the National Register of Historic Places in 1998.

The Department of Veterans Affairs is proud to have the National Cemetery designated as a local Landmark, cemetery director Jeff Barnes said.

A total of 1,803 interments have been made in the cemetery, the last being within the last year. Yet, there are only 1,656 maintained gravesites, since several are two buried in one grave.

The double iron gate with limestone pillars on McCarty Street was constructed in 1937 and a wrought iron fence at the south entrance was installed in 1938.

The revival-style rostrum with Doric columns and Roman arches was built in 1942, following a trend in the 1940s to build similar platforms at national cemeteries.

Last summer, the cemetery, under the care of Jefferson Barracks for the Department of Veterans Affairs, received a full renovation with new turf, leveling the surface and reallignment of the headstones.

Some information for this story was retrieved from cem.va.gov.

Wreaths for Heroes is accepting $10 donations for each reusable wreath that will be hung annually on veterans' graves at the Jefferson City National Cemetery in December, as part of the Wreaths Across America project. Call 635-5651 or e-mail to [email protected] embarqmail.com for more information.