Home's character is as constant as its tradition of hospitality 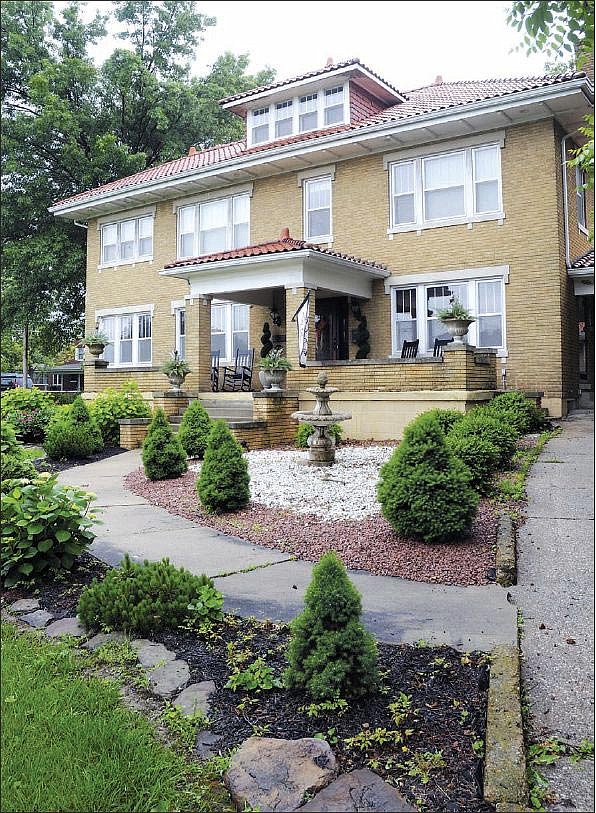 The house now belongs to Gina Volmert, who plans to share it with the public as part of the annual homes tour put on by the Historic City of Jefferson.

A home can be a gift. For John Sommerer and his wife, Lillian, when they built 2023 W. Main St., it was their dream home in which they reared children and helped rear grandchildren and a place from which they served the community.

For Gina Volmert, the blonde brick home between West School and Memorial Park is where she hosts family and friends, continuing her grandmother's tradition of hospitality.

"Everyone every holiday went to Grandma's in Wardsville," Volmert remembered. "I don't remember any better times in life than when we were all together.

"I hope it will be that way here."

The home, built by the Jefferson City Bakery Company owner in 1929, was listed as a city Landmark in 2004.

"It's amazing the neighborhood has changed, but this house hasn't," Volmert said. "It's such a neat-looking house."

And it will be featured on the "Four Corners" home tour June 6, sponsored by the Historic City of Jefferson. 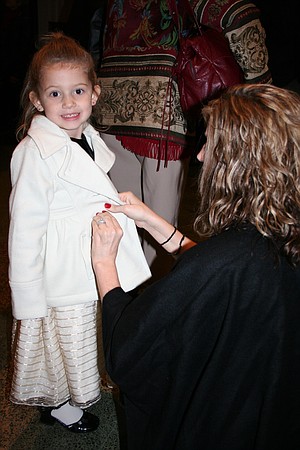 Photo by Lauren Clark
Hayla Goforth gets some help from her mother.

"I had no idea how many people have such an interest in this house," Volmert said. "I feel like it doesn't just belong to me.

"Something this old belongs to the community."

When the John Sommerer Sr. family moved into their "dream home" in 1929 from living next to their east-side bakery, the home with Italian Renaissance- and Prairie-style influences sat on about 12 acres, extending to the railroad tracks and to West Elementary School.

"No one else was around; it was a single, solitary home on a vast property," Volmert said.

The Sommerers maintained a sizable orchard of pears, apples, peaches and cherries, from which Lillian would prepare all sorts of good things to eat, recalled their son Carl Sommerer, 88.

And Lillian was an adamant gardener, recalled Palazzari.

"She had beautiful roses where the pool is now," Palazzari said. The generous grower provided roses for many special occasions in the community.

The home originally was a single-family residence, converted to a home with apartment when Wagner and Palazzari's parents moved in. But the previous owner restored the single family appeal, making the apartment into a special master suite.

The surrounding subdivision was formed in 1952. Before Sommerer built his "dream home," oral history records that the property belonged to a freed slave who had received it through the will of his former master.

Recently, some of the Sommerer descendants visited Volmert at the home to discover their families have much in common having to do with the home.

Every holiday since July 4, 2008, Volmert's extended family has gathered there.

Just as Wagner, Palazzari and their peers used to slide down the stair rails, so today Volmert's nieces and nephews enjoy the same fun.

"Flaws and scrapes and radiator burns add to the house; they'll stay forever," Volmert said. She'd rather the home was inviting and a place for fun than perfect.

Lobster has been the main course at two of the families' most significant events - at Volmert's moving-in party and at the original Sommerers' anniversary celebration.

The gate at the top of the steps was memorable for the sisters too, as well as being functional for Volmert's 16-year-old Labrador, Oopy.

And Christmas caroling is another staple of both families - though the Sommerers roved the neighborhood and Volmert's family gathers around her grand piano.

Palazzari shared stories of sneaking out of her upstairs window to go cruising with friends in her father's car. Volmert joked she may need to check the window locks on the upstairs bedroom she has made for her nieces.

One thing the Sommerer family meant to do but never did was a guest registry. When Palazzari mentioned it, Volmert committed to starting one.

The third floor window is a favorite of all generations.

"You feel like you're up so high," Volmert said.

Lillian Sommerer made many Christmas decorations. The large Christmas star hung in front of the bay window, overlooking the life-sized wise men "traveling" through the orchard to "visit" the Nativity in front of the house.

Volmert said she intends eventually to do something similar. "I don't think houses are homes unless a family gathers there," Volmert said. "It makes it enjoyable to pay a mortgage." Before buying the Sommerer House, Volmert acquired a piece of rural land on which to build. "I've always loved old homes," Volmert said. "You can't get that much character today.

"Other people's footsteps have been where you are.

In listening to the sisters' stories and looking at old photos, Volmert was reassured this was the home for her.

"It's nice that some things stay the same."