Generosity, community and family have been trademarks of the house that is now outlined by white Christmas lights on the St. Mary's Boulevard hillside. 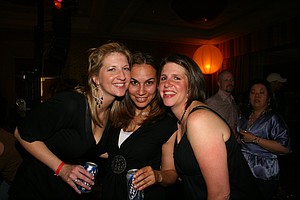 More than the fact that five generations have lived in the same home, the 1858-built brick structure holds a claim to historical fame only one other remaining building in town can boast.

"This hillside has seen a lot of history," said family member Edith Vogel. "People who've lived up here have been witness to it and participated in it."

Union Gen. John Fremont reportedly set up Camp Lilly on the hillside. Military historians confirm that protocol dictates the general would have made his headquarters in the home during the War Between the States.

Only Missouri Farm Bureau's Wallendorf Cabin can make a similar claim. The story goes that Confederate Gen. Sterling Price set up his headquarters in the Wallendorf home at the same time, while his troops camped around it at its former location at the corner of Edgewood and Missouri 179.

In the end, Price retreated and the Battle of Jefferson City was averted. Nevertheless, they represent tangible remains of that era soon to commemorate a sesquicentennial. The home at 800 St. Mary's Blvd. was named a Landmark early in the city's recognition program, due to its significant history.

The hillside home passed from G.H. Dulle to his son Henry J. Dulle, who reared 10 children in the home, including Rose, the youngest born in 1891. Rose married Ernst Moerschel and lived nearby on Bolivar Street until about 1930 until they moved back to the Dulle homestead with her mother, Theresa. 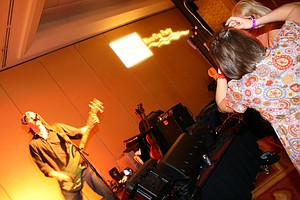 "This was grandmother's house," said Edith Vogel of Rose. Vogel's mother Rose Mary finished high school living in the home and held her modest wedding reception there in 1942.

Every Christmas Eve from then on, all of Rose Mary's children and grandchildren have returned to the home, until three years ago. Some of the sixth generation were unable to make it in for the holiday, due to overseas commitments and military service.

The family traditions during Christmas have been simple, a light supper and opening practical gifts that evening. 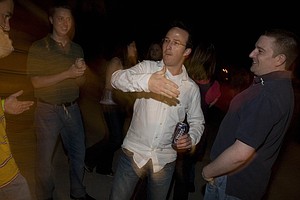 "We didn't get a lot of gifts," recalled Emily Talken, another daughter of Rose Mary. Before the holiday, the dining table would be covered with fresh-baked cookies, Vogel and Talken remembered. Their grandmother and Aunt Emma Dulle then invited them as children to color their own bowl of frosting and decorate the sugar cookies. "There was nothing fancy about any of it; but it was fun," Talken said. Then when they were old enough to drive, the grandchildren began delivering tins of cookies and whiskey bottles full of homemade eggnog to men and women in religious life in town, plus family friends and the less fortunate. "We learned giving, sharing, respect for the religious and the elders," Vogel said. With such a prominent location, visible even from the Missouri River, Vogel was eager to dress-up the home with lights. "I thought people should know this house that sits on a hillside is 150 years old," Vogel said.

Later she added lights to the 50-feet-tall tree, planted in remembrance of her grandmother.

It took 1,000 lights and a professional service won at the Samaritan Center Foundation's auction.

"The community has been good to our family, so it's a give-back," Vogel said. "It's how we were raised - cookies and eggnog, generosity."

The Dulle homestead stands similar to how it started more than 150 years ago, complete with smokehouse and other outbuildings.

The dining room and kitchen were added in the 1890s to the original double parlor home with four bedrooms.

Recently, Vogel, the fifth generation in the family to live there continuously, added a picket fence as she saw the home in a photo of her grandmother as a teenager.

"It will make the house look like an old farm house," Vogel said. "We're responsible for maintaining this "old barn' as mother called it."

At one time, the home sat on 200 acres, which includes today's Missouri National Guard armory, the Southwest Early Childhood Center and Washington Park.

"We all still call this our ancestral home," Vogel said. And not just the descendants of Rose Mary Vogel, which include her other children - state Sen. Carl Vogel, R-Jefferson City, and Rose Mengwasser.

Although the home represents seven generations now from G.H. Dulle, it also represents a community's history, too.

"My roots are strong to this community because of what my ancestors did before me," Vogel said of the Dulle family that immigrated from Hannover, Germany.

"They gave at their time, and it was my time," Vogel said of running for and serving on city and county offices. "There's always been a feeling of service; politics is a way to give back."

As a seventh generation emerges, Vogel said she hopes the home will continue to remain in family hands.