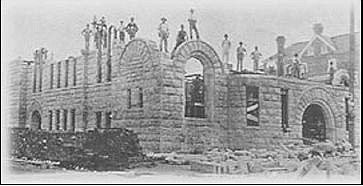 The Methodist presence has long stood on Capitol Avenue.

Before First United Methodist Church built its stone structure at the corner of Capitol Avenue and Monroe Street, it had two locations further west, both fronting what is now Capitol Avenue.

Perhaps that's an indication of the church's political interests, as it has had prominent figures in its congregation and has taken stands on controversial issues.

One of the favorite stories of this city Landmark's past is Gov. Lon Stephens and his wife Margaret Nelson Stephens ensuring the current structure would be built.

They used their influence and their station to raise funds, including events held on the Governor's Mansion grounds and dinners inside.

Arthur Barnes, pastor at the time, tells a story in the book "The Centennial Volume of Missouri Methodism."

Barnes' story goes that one time the governor was entertaining Bishop Candler at the Mansion and told the bishop that if he would "give them a man who would work with the Governor and his good wife, that a new church could be built that would be an honor to state-wide Methodism,' church history says.

In the end, the couple raised about twothirds of the necessary funds.

The church also found itself in the midst of the nation's slavery disagreement in the 1800s, resulting in the original congregation's split.

That's where the history gets tricky, said church historian John Findley. In 1939, the remnants of those congregations rejoined and now First Methodist holds both sets of historical records that do not always denote "north" or "south" church.

As early as 1837, the Methodist Episcopal Church existed here, though no official church records date prior to 1841, when the first pastor was appointed. The first house of worship was in the 100 block of Capitol and was later transferred to another congregation.

And the southern church built Schumate Chapel on the road of the same name in what was "upper Jefferson City" at the time of the Civil War.

The second was built in 1874 in the 200 block of Capitol, where the News Tribune parking lot is today.

And the current sanctuary and subsequent expansions still stands in the 300 block of Capitol, more than 100 years after the construction of architect Charles Opel's design.

The church "has always considered itself a downtown church," Findley surmised. "Over the years, efforts were made to move it out of town."

However, those resulted in new congregations rather than moving the existing church.

Wesley United Methodist Church was such a progeny, as was an attempt for a new church on the east side, which dwindled after many years.

"The building's not the church, it's the people," said Clarence Billings, who has been a member since 1965.

Over the years, the church has evolved to meet the needs of its members and the community, Billings said.

The church is a place of belonging and friendships. From youth activities to rich music opportunities to missions here and abroad, the people within the church act out their faith.

Rosalie Little found the opportunity to extend her ministry to four-year-olds beyond her Sunday School classroom to daily preschool in 1969, which continues today.

"This is a caring and loving church with great outreach and strong interest in mission work," Little said.

One of the remaining original features of the sanctuary are the stained glass windows. Little said she enjoys the worshipful environment and the beauty of the sunlight illuminating the Biblical stories.

Some day, the church hopes to compile its history into a book.

"Even if it's not real extensive, it's important to have the recorded history," Findley said. "It's amazing you can lose track completely.

"Even in a large church, if you don't keep historical records, even second-hand like a church history, you're in danger of losing parts of your past.

"If you don't have it written down, those who know it will die and the history is gone."