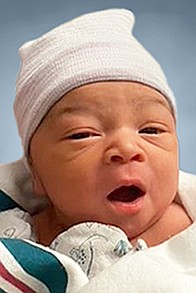 Jacolby Arlee Lewis Jr., infant son of Jacolby Arlee Lewis Sr. and Joniva Lee Tolen, entered into his peaceful rest on Sunday, January 22, 2023.
He was born in Columbia, Missouri on January 8, 2023. Jacolby was planned and adored by God, and loved immensely by his family. While his time with us was short, he came into this world a fighter and left a big mark on those who love him. #CJsWorld
He is survived by his parents, Jacolby and Joniva; paternal grandmother, Loretta Lewis; maternal grandparents, Micherle and Johnny Tolen; uncles, Javary Lewis, Alex Nickel, and Johnny Tolen Jr.; aunts, Jakya and Jalysa Lewis, and Deja and Johnnie Tolen; and a host of great-grandparents, uncles, aunts, cousins, and extended family.
Friends and family will be received on Saturday, January 28, 2023, from 1:00 p.m. – 2:00. p.m. at Houser-Millard Funeral Directors. A funeral service will begin at 2:00 p.m. with burial following directly at Hawthorn Memorial Gardens.
Expressions of sympathy may be made to the family to assist them during this time in care of Jacolby and Joniva.
Arrangements are under the direction of HOUSER-MILLARD Funeral Directors, 2613 West Main Street, Jefferson City, Missouri 65109 (573) 636-3838. Condolences may be left online for the family at www.millardfamilychapels.com.