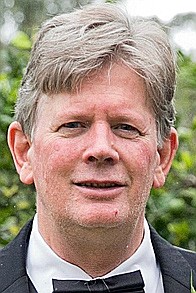 Kevin Wayne Sweeney, 69, of Jefferson City, Missouri, passed away unexpectedly on Saturday, May 21, 2022. He was born on March 23, 1953, in Madison, Wisconsin, a son of the late Wayne and Laura (McPherson) Sweeney. He was united in marriage to Joy Wanner on June 6, 1987, in Arlington Heights, Ill. Kevin loved to travel with his wife and any other family they could recruit. He was an amateur air travel expert, racking up enough miles that we will be contacting several airlines to demand a plane named in his honor. He loved Up in the Air, in spite of the fact that he possessed absolutely none of the cynical detachment of George Clooney's character. We think he just liked the jokes about people being slow at security. He and Joy also spent their summers motorcycling around Missouri, visiting every small town in an obscure travel book they bought at a state fair. He loved riding his motorcycle on backcountry roads almost as much as he loved spending time with his wife. (He would now insist we tell you that it was, in fact, not even close; the one thing he would never joke about is his love for his family.) Renowned among family and friends for his extensive knowledge of everything from the latest macroeconomic trends in Southeast Asia to what you can find off each exit in the US interstate highway system, Kevin liked to read the encyclopedia for fun as a child, and he continued throughout his life to place a high value on understanding how things worked and why that was so. His intellectual curiosity was reflected in myriad ways (such as studying Mandarin, Portuguese and Spanish in his 60's) and always enriched the lives of those around him. He shared this passion for knowledge with his family, along with other similarly signature characteristics such as his love for tomato-based sauces. Kevin is survived by his wife of almost 35 years, Joy; children, Heather, Joshua (Lauren), Nicole, Derrik and Phoenix Sweeney; brothers, Kelly Sweeney, Kerry Sweeney (Joyce) and Keith Sweeney; grandchildren, Jacci Braun, Marissa Wilson, Emma, Jackson and Hannah Sweeney; and great-grandson, William. He was a 1971 graduate of Edgewood High School in Madison. Kevin went on to earn degrees from Madison Area Technical College, American Intercontinental University, and was a PhD candidate at Capella University. He was the smartest man any of us knew, though if we're being honest, none of these places had much of anything to do with that. Friends will be received from 5:00 p.m. - 7:00 p.m. on Wednesday, May 25, 2022, at Houser-Millard Funeral Directors. Funeral services will be held on Thursday, May 26, 2022, at 11:00 a.m. at Houser-Millard Funeral Directors with Pastor Mark Landis officiating. In lieu of flowers, expressions of sympathy may be made to Community Anti-Drug Coalitions of America (CADCA). Arrangements are under the direction of HOUSER-MILLARD Funeral Directors, 2613 West Main Street, Jefferson City, Missouri 65109 (573) 636-3838. Condolences may be left online for the family at www.millardfamilychapels.com.