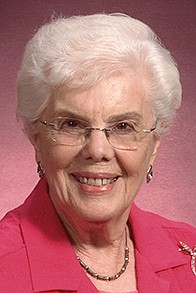 E. Louise Schreiber, age 96, of Jefferson City, passed away peacefully on November 11, 2020, at Primrose Retirement Community. Louise was born February 22, 1924 in Greene County, Missouri, the daughter of J. Fred and Sybil Rogers Giboney. She was married in Houston, Missouri on April 27, 1945 to Harry Schreiber, who preceded her in death on June 23, 1990. Louise received her education in the Greene and Polk County schools and in 1940 graduated from Pleasant Hope High School at the age of 16. She graduated with her Bachelor of Science degree in Education (Music, English, and Speech) from Southwest Missouri State Teachers College, now MSU, and also attended the University of Missouri in Columbia. In 1943 she began her 41-year teaching career in the Houston Missouri school district, a career that also included Weaubleau, Nixa, and the Kickapoo elementary and junior high schools in Springfield. In 1954 the family moved to Jefferson City where for six years she taught vocal music at Simonsen Junior High before becoming the District Elementary Music Supervisor. Next to cherishing time with her family, she loved teaching music the most. She had a gift to inspire and get the very best out of her students. "Mrs. Schreiber's" classrooms were always filled with singing and laughter. She retired from the Jefferson City Public School District in 1984 after celebrating her love of music with children for 30 years. Louise lived a vibrant and active life. She was a woman of quiet strength and resolve and displayed a resolute sense of courage. She loved her family dearly and possessed a wonderful sense of humor. She was a person of deep Christian faith and an active member of the First United Methodist Church. She cared deeply for her church family, her time in the Chancel Choir, and membership in the Harmony Sunday School Class. Learning was a lifelong passion: she was an avid reader, especially enjoying biographies and history, and she worked crossword puzzles to stay sharp. She explored and documented family genealogy. She was active in Learning in Retirement. She loved nature. Her yard was always filled with vibrant colors and wildlife, a product of her gardening skill. She enjoyed traveling the world and experiencing other cultures. Louise was an accomplished pianist who rarely passed a piano without playing, and she entertained her fellow Primrose residents often with sing-alongs. She directed numerous choirs and ensembles during her lifetime including school productions, Capitol Caroling (assistant director) from 1954-1959, the Jefferson City Boy's Chorus in the early 1970's and coordinated the elementary school portion of the public school's United States Bicentennial Celebration in 1976. Louise was a member of Sons and Daughters of the American Revolution, Sons and Daughters of the Pilgrims, Daughters of the Union Veterans, Missouri Retired Teachers Association, Cole County Retired Teachers Association, The Historic City of Jefferson, The Thomas Lawson Price Society, and the Owsley Family Historical Society. She volunteered as a Docent at the Governor's Mansion during several administrations. She sang in the Jefferson City Cantorum. She was a Charter Member of the Alpha Kappa Chapter of Alpha Delta Kappa Honorary Sorority for Women Educators. Louise is survived by her three children: Mark S. Schreiber (Debbie), Elaine L. Woodman-Schollmeyer (Ron), Kirk M. Schreiber (Sharon), all of Jefferson City, Mo. and her step-daughter, Linda Schreiber Parker (Donald) of New Iberia, La. Nine grandchildren called her Granny: Kent Schreiber (Sabrina) of Greenbriar, Ark., Julie Woodman Schneider (Robert) of Kansas City, Mo., Brian Woodman (Zoe) of Bloomington, Ind., Ryan Schreiber (April) of Fort Dix, N.J., Amanda Schreiber of Jefferson City, Elise Schreiber Peck (Joe) of Springfield, Mo., Morgan Thompson Casey (Quin) of Roseville, Calif., Stacy Schollmeyer Faust (Warren) of Ladera Ranch, Calif. and Robert Schollmeyer (Liz) of Jefferson City. Louise is also survived by 13 great-grandchildren; her sister, Kathryn Giboney James of Lubbock, Texas; and many nephews, nieces, and friends. Louise was preceded in death by her parents, and two brothers, Carl Giboney and John Roger Giboney. Due to the pandemic, a private graveside service will be held Tuesday, November 17, 2020 at the Diane Peck Outdoor Sanctuary at Riverview Cemetery with the Reverend Trevor Dancer officiating. A webcast of Louise's service will begin at 12:00 p.m. Tuesday for friends that are not able to attend by going to her memorial page on Freeman Mortuary's website. Memorials can be made in her memory to the First United Methodist Church Jefferson City, Big Brothers Big Sisters of Jefferson City, or to a charity of choice. Please mail all donations and sympathy cards in honor of Louise to P.O. Box 95, Jefferson City, MO 65102. Funeral arrangements are under the care of Freeman Mortuary. www.freemanmortuary.com