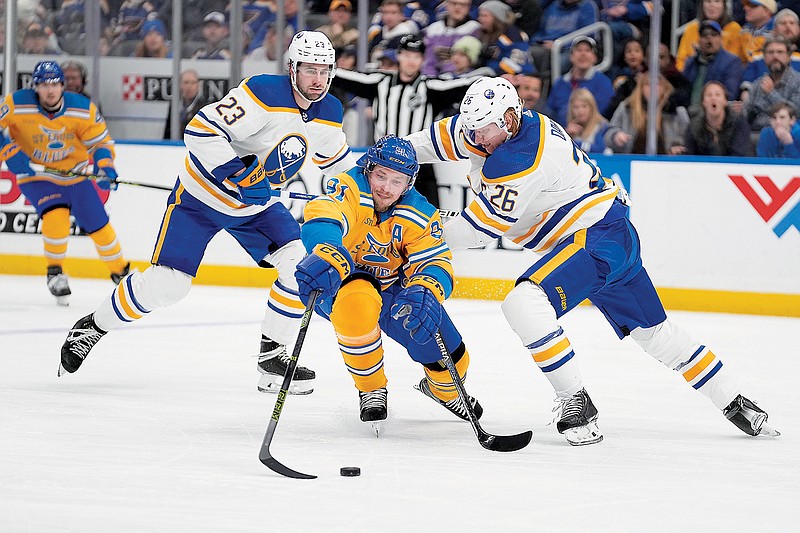 Vladimir Tarasenko of the Blues reaches for a loose puck as Sabres' teammates Rasmus Dahlin (26) and Mattias Samuelsson (23) defend during the second period of Tuesday night's game at Enterprise Center in St. Louis. (Associated Press)

ST. LOUIS -- Tage Thompson and Jeff Skinner each had a goal and two assists Tuesday night as the Buffalo Sabres beat the St. Louis Blues 5-3.

Thompson extended his point streak to five games, his third streak of five or more games this season. It was also his ninth game this season with three or more points.

“I think our line has been playing well, generating a lot of offense and when it’s not going in for me, I think my linemates are doing a good job getting open,” Thompson said. “I think we play really well as a line and when one guy is not scoring, one or two guys are.”

Skinner also has a five-game point streak, his second such stretch this season.

Alex Tuch had a goal and an assist, and Owen Power and Dylan Cozens also scored for the Sabres, who snapped a nine-game losing streak in St. Louis dating to Jan. 21, 2012.

Ukko-Pekka Luukkonen made 26 saves for Buffalo, which improved to 2-6-1 in the second game of back-to-backs this season -- but not before nearly blowing a four-goal lead.

“It was really close I thought to making it 5-0 and it didn’t happen and they came back in the game, give credit to them,” Sabres coach Don Granato said. “They fought hard. They are a good hockey team and the atmosphere got going and you’ve got to win games and find ways to win games regardless.”

Ivan Barbashev, Brayden Schenn and Jordan Kyrou scored for the Blues, who finished 3-4 on their longest homestand of the season. Jordan Binnington made 26 saves.

“It’s frustrating with the starts more than anything, the mistakes,” coach Craig Berube said. “It’s not being prepared to play.”

Skinner gave the Sabres the lead 60 seconds in. Thompson created the chance by stripping Tyler Pitlick of the puck in front of the Blues net and feeding Skinner.

“We wanted to make sure that we came out making things simple and just taking time and space away from them,” Thompson said. “I think that’s what you see in the first shift there. I think the whole first period we stuck to the game plan pretty well and wore them down.”

Power made it 3-0 midway through the first period, scoring on a perfect backdoor feed from JJ Peterka.

Thompson added his 33rd of the season on a backhand 70 seconds into the second.

“It’s been a lot of games in a really short time, so he’s finding different ways to contribute through fatigue and different challenges,” Granato said. “Obviously, opponents play him different, which is all good, it’s great. Through that pressure and that challenge you find ways to become better and more intuitive.”

Back-to-back goals from Barbashev and Schenn in the second gave the Blues some life. Defensemen Torey Krug and Justin Faulk assisted on both goals.

“We made a push. We had chances,” Schenn said. “We could have tied it up, but at the end of the day, when you’re down 4-0, you don’t deserve to win the game. We have to do a better job of starting on time, and focusing on that again and going from there.”

Kyrou’s goal from the high slot 47 seconds into the third cut it to 4-3, forcing Luukkonen to make several big saves on high-quality chances from Brandon Saad and Vladimir Tarasenko to preserve the lead.

The Blues had a 6-on-4 after Peyton Krebs was called for a faceoff violation with 1:46 left, but Cozens’ empty-netter with a minute left sealed it.

“Obviously, we didn’t want the game to be that close after we got up four goals, but we found a way and that’s what matters,” Cozens said.

Tarasenko and Krug both returned for the Blues. Tarasenko sat out 10 games with a hand injury, while Krug missed 13 due to a lower-body injury.

Notes: The Blues placed LW Pavel Buchnevich on injured reserve after he underwent a surgical procedure to address an ankle infection. Buchnevich, who has 38 points (15 goals, 23 assists) in 38 games, will be re-evaluated after the All-Star break. … Buffalo LW Victor Olofsson had his four-game goal streak snapped. ... The Blues plays Thursday night at Arizona. ... The Sabres play Thursday night at Winnipeg.