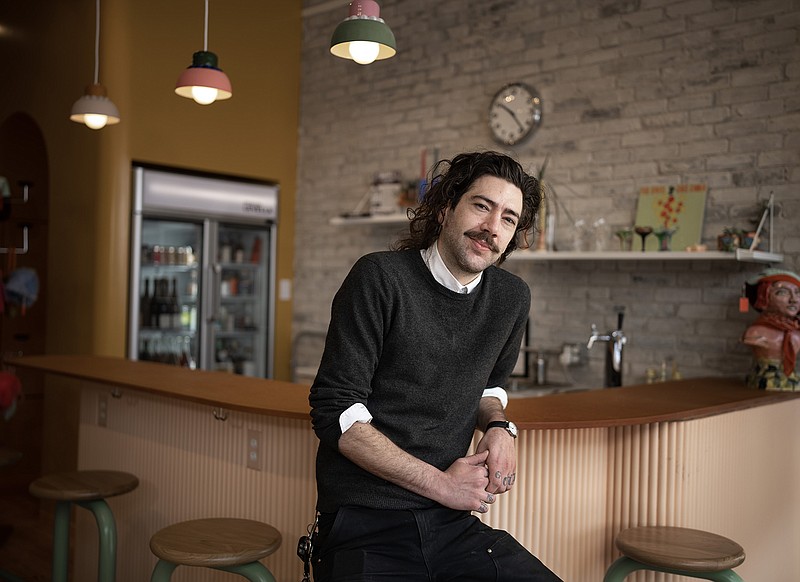 MINNEAPOLIS -- It was January 2020, and Peder Schweigert had struck a nerve.

As the beverage leader of Marvel Bar, the game-changing Minneapolis cocktail haven beneath the Bachelor Farmer, he had created a new cocktail menu that was garnering national attention as much for what was in the glass as what wasn't. The drink list was known simply as "Dry," and he'd built many flavors from foraging Minnesota-grown ingredients. What guests enjoyed were nuanced, seasonal ingredients that were mixed, studied and considered like all drinks served at the cerebral bar. But not one leaned on the standard cocktail backbone: alcohol.

The booze-free drinks began as a passion project for Schweigert, who had made the personal decision to quit drinking alcohol. He was energized by the idea of building a new and more inclusive beverage program that could bridge the divide between those who love a drink and those who wanted -- or needed -- to avoid alcohol.

"Our goal was how to figure out how to have that warm embrace of hospitality and the intention we put into our drinks," said Schweigert.

And then, March 2020 landed with a thud like the mother of all hangovers. It was the month Minnesota Gov. Tim Walz ordered all restaurants, bars and other venues to close to avoid the spread of COVID-19.

Schweigert would not have the opportunity to create a Dry 2.0. The following month, with no end to the pandemic in sight, it was announced that the Bachelor Farmer restaurant, cafe and Marvel Bar would not reopen.

Like many in the hospitality industry, Schweigert was out of a job.

In another part of town, stylist Erin Flavin was contending with her own murky future. The owner of Honeycomb Salon had built up a bustling business on a profession that, like serving or bartending, should have been able to carry her anywhere.

In the quiet of the pandemic, her hands, so used to constantly combing, styling or cleaning, reached with increasing frequency for a glass filled with something that numbed and passed the time.

Jokes around pandemic drinking fluttered through social media, normalizing increased consumption. Flavin was a part of that culture, with alcohol slowly seeping into at-home routines, the fuzzy-headed mornings blurring into days. She knew there had to be another way.

Once she decided to toss out the bottles, her quest for adult beverage alternatives began. Visiting her local wine shop, she found few options and little interest from its owner in stocking more than one or two token nonalcoholic bottles. As people began to trickle back into Flavin's salon, the quest for great NA beverages was the topic of several conversations.

"When I quit drinking, I therapized with my clients," Flavin said. "We would support each other through this."

Somewhere in that mix, an idea formed. Flavin would collect the NA bottles and cans she was enjoying. An expansion into the space next to her salon would be a store unlike any other in the Twin Cities. Marigold nonalcoholic bottle shop was born.

When the pandemic struck, Marco Zappia was already a prominent fixture in the beverage world. A lifelong scholar, he was known for creating zero-waste cocktail programs for Daniel del Prado's restaurants.

"We were already known for pretty extensive and intense [beverage] prep," Zappia said.

More than just dicing citrus, this was creating vermouths and potent flavors in glass bottles ready to provide the basis for cocktails. Poured over ice, the botanical elixirs were floral, refreshing, complex and often without alcohol.

But a day job as beverage director for a high-end restaurant group made it difficult to focus on the smaller-scale beverage tinkering -- until all the restaurants closed.

"We always had the idea of taking that really heavy prep into a separate company," Zappia said. "Tighten the cogs and focus on hospitality -- and pull those financial levers to make it sustainable."

"Another thing that had been bothering us -- we have a bad habit of cherrypicking ingredients around the world," he said, which raised the carbon footprint of the bar program. In an ideal world, the beverages would lessen the pressure on the world's resources.

"Then COVID hit and broke that cycle," he said.

That was the official beginning of 3 Leches (Tres Leches), a beverage group founded by Zappia, Dustin Nguyen and Adam Witherspoon, who had all worked together at Martina. The company now supplies dozens of Twin Cities bars and restaurants with cocktail bases or delicate and sophisticated NA beverages.

"We were able to go play in the dirt and get out of the Cities," Zappia said of building the company. "We met farmers, we studied. The University of Minnesota has the Green Initiative to better understand what producers do. Isolating raw materials that the Midwest does better than anywhere else in the world made all the difference."

Because it was happening outside the constant drive and demand of nightly service, 3 Leches was able to find its groove to tackle the core dilemma of making a superior NA beverage.

"It's way harder to make nonalcoholic things than alcoholic things," Zappia said. "It's a beast of a molecule that's both water- and oil-soluble." That's why a sip of wine after a rich dinner whisks away the flavors of the food, ushers in the flavor of the grape while simultaneously refreshing the palate for another bite.

To make its fermented beverages, 3 Leches tapped St. Paul's ABV Technology. Led by Ben Jordan, ABV created a system that removes the alcohol from the ferments. (The company is also why so many new NA craft brews and ciders are entering the market.)

Many of these products, including 3 Leches' cans and local NA beers, are now available on the shelves of Marigold, which officially opened in November.

On a recent sunny afternoon, Marigold store manager Lara Valente and another worker were restocking shelves.

"We got slammed for New Year's Eve," said Valente, a local hospitality professional who describes her drinking habits as "moist." She used to work in wine, pairing bottles with meals at places like Petite Leon, but she's passionate about all the options available on the market now.

One bottle she was excited to share hadn't hit the shelves yet: Dry Wit. And its story begins with Megan Dayton.

"I quit drinking five years ago to truly save my life," Dayton said. "I was an alcoholic and it was going to get me."

After completing an inpatient treatment, she returned to her life and the things she loved, including enjoying fantastic restaurants with her friends. During the meals she would often be stuck sipping a club soda, or maybe a syrupy concoction. "And I was feeling great, losing weight," she said. "I didn't want sugar."

One pre-pandemic night in New York City changed everything. An up-and-coming chef had created a tasting menu with a temperance beverage pairing. It was revelatory.

"The drinks matched the quality of the food and it was a godsend," she said.

She came home and tried partnering with a couple of people to develop her own NA beverage, yet none of the flavors jelled with what she had in mind.

The key was in her extended family, someone who had much of the top beverage talent close at hand. Eric Dayton, the owner of Bachelor Farmer and Marvel Bar, was a cousin of her late husband, James Dayton.

"I always knew that Eric knew people, but I knew he didn't want to share them because he had a good thing going," she said.

After the restaurant closed, Megan Dayton made the call and Eric gave her the contact information for someone who was until very recently the head of Minneapolis' most innovative bar program: Schweigert.

"I kept working on things that taste complex, but without the alcohol," Schweigert said. "Cool soil and growing build complexity in wine -- as well as fermenting. But we are not fermenting."

While some national NA beverage companies use kombucha bases, extracts or bitters, those ingredients can include trace amounts of alcohol.

"A lot of the products have things you can't have when you are pregnant or nursing -- or on certain medications," Schweigert said. "The place we found ourselves happiest in are with ingredients that are common, but not always used in beverages. Things like bay leaves. You can't pick out a bay leaf from a flavor lineup, but it's spicy and green and complex -- peppery and vibrant."

Another unexpected flavor he leans on is linden flowers. "You smell them every spring and summer all over the Twin Cities, but people don't know what it tastes like. The flavor is unbrewed tea, honey, mead and grassy."

Dry Wit's initial line includes three bottles, with literary-inspired names. Pippi is effervescent with a mischievous quality to it. Salinger is heavier-bodied with tannins that have the linden flowers and a bit of clarified pear juice for body. Bruce is a little light-bodied red -- bay leaf mixed with cherry juice.

The wines are refrigerated, carbonated and retail for around $30 a bottle. Packed into high-quality champagne bottles, they are perfect for celebratory occasions.

And celebrate they will. There's a big launch party in the works, where 3 Leches and Dry Wit will be poured from behind the chic bar at Marigold to family and friends, all excited to toast this tasty new NA era. 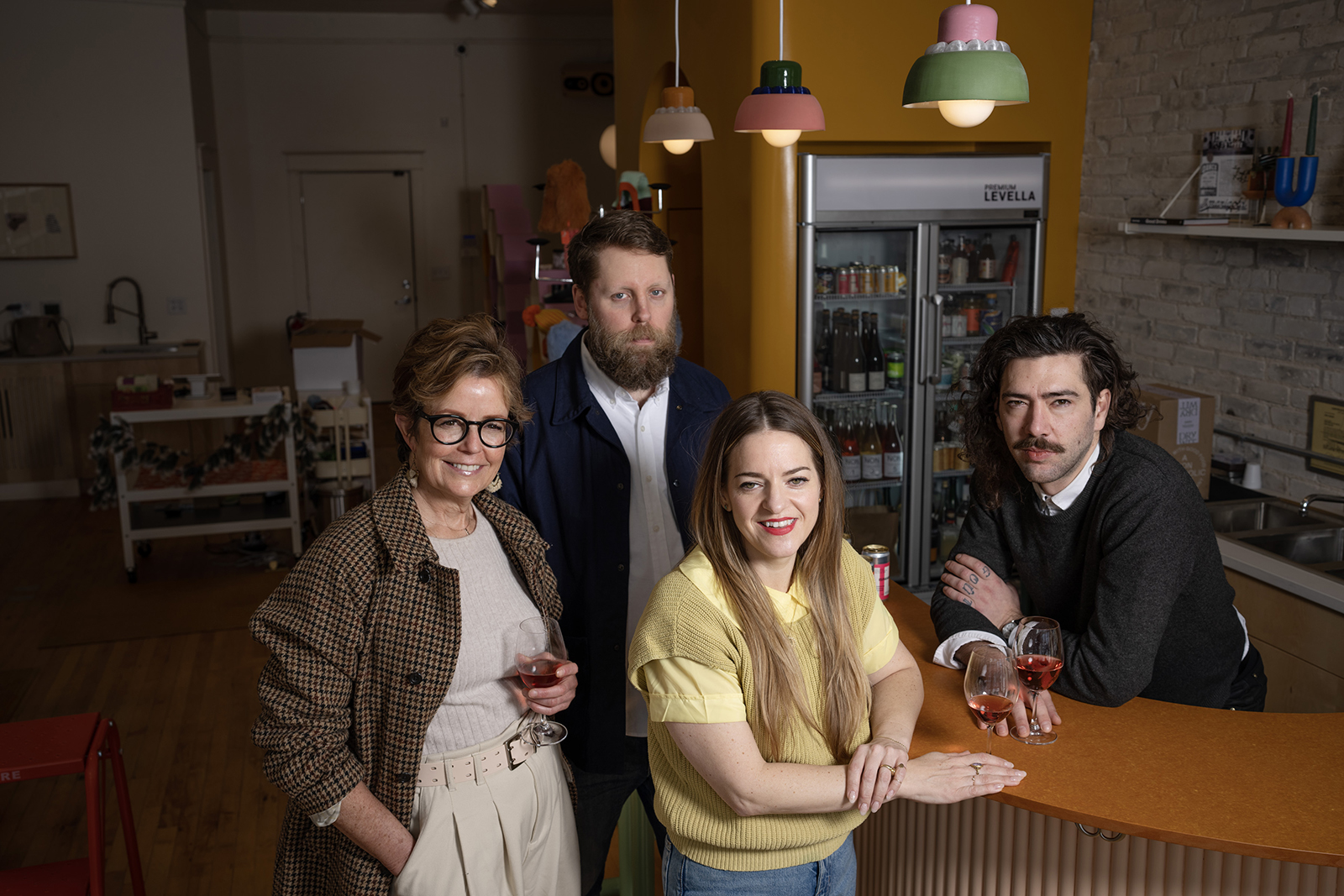 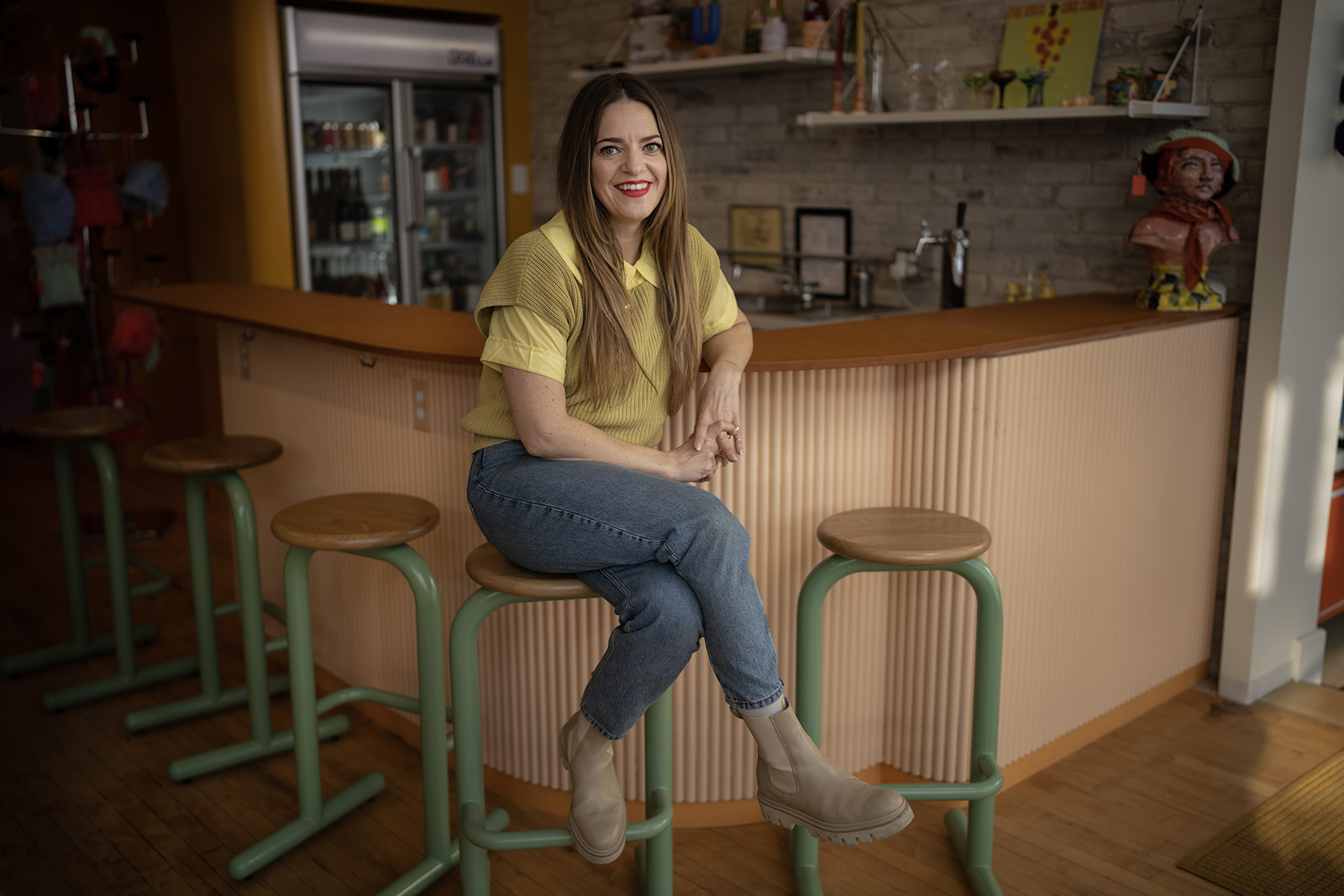 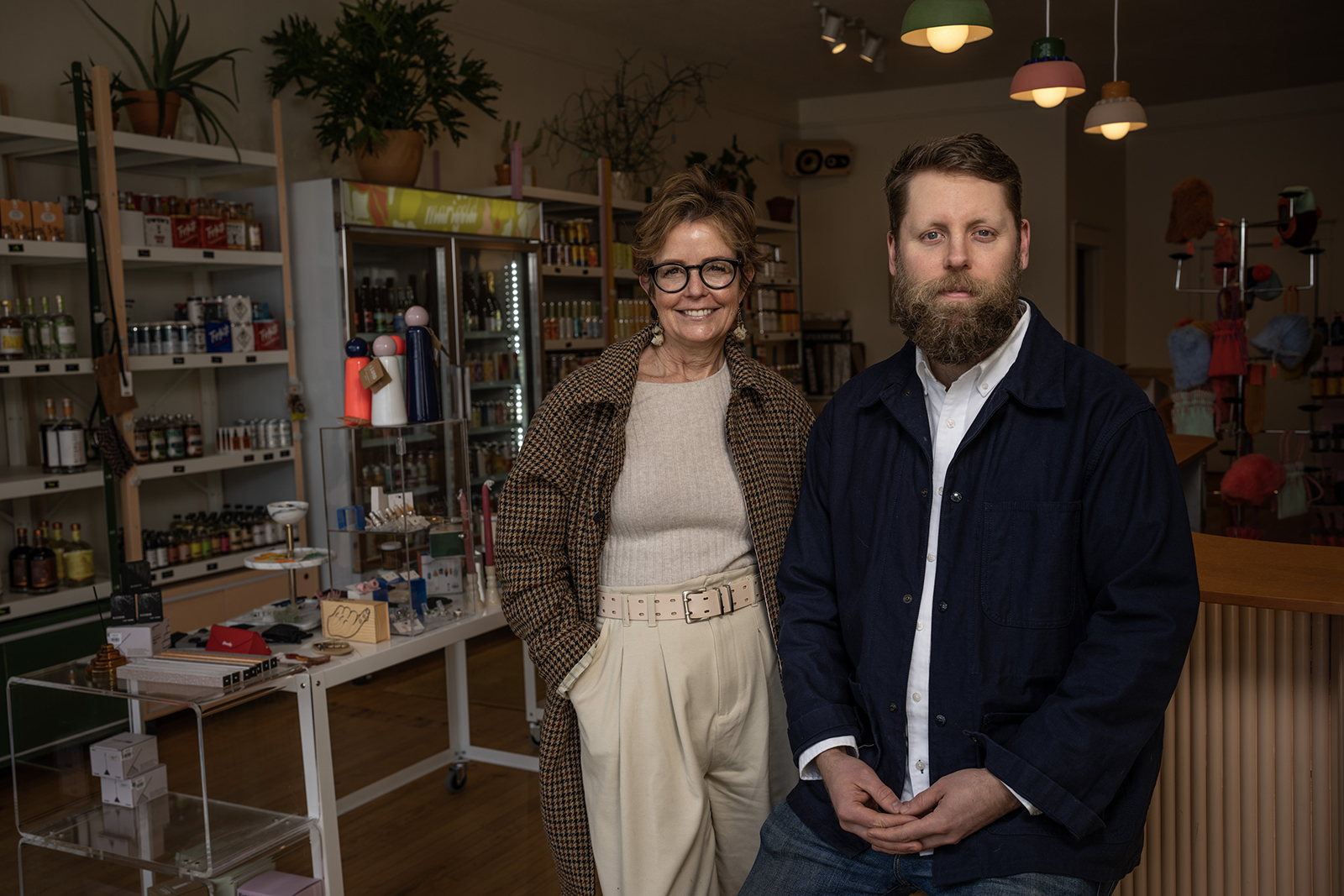