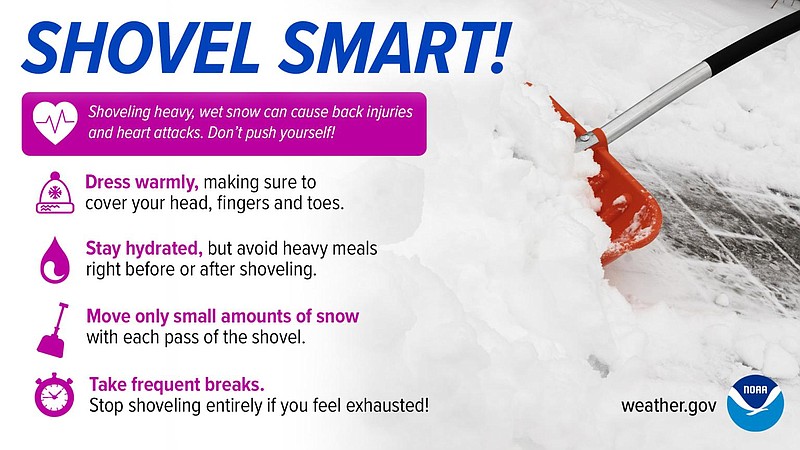 This National Weather Service graphic displayed Wednesday, Jan. 25, 2023, on the NWS website advises Missourians how to safely shovel snow, something Jefferson City didn't get much of.

The Jefferson City area was largely spared from a winter storm that dropped a foot of snow on some parts of Missouri.

Forecasts called for approximately 4 inches of wet and heavy snow to hit Mid-Missouri on Tuesday night through Wednesday morning, causing a rash of school closing throughout the region. Instead, streets remained largely clear, but still a little icy, as about 2 inches of snow blanketed rooftops.

Kevin Deitsch, meteorologist with the National Weather Service out of St. Louis, said temperatures were a degree or two warmer than predicted in the forecast.

He said snowfall in the Jefferson City area started tapering off around 8:30 a.m. Temperatures remained above freezing the rest of the day but were expected to drop to the low 20s Wednesday night, according to the forecast. That had the potential to lead to re-freezing, Deitsch said.

Very few areas in the county actually needed plowing Wednesday. Landwehr said there were some spots, largely around Eugene, where some slush accumulated on the roads.

Landwehr said his crews went out at midnight to check the roads. They also put some salt down during the morning to prevent re-freezing at night, he said.

The city was similarly underwhelmed by the snow. Russ Rackers, street manager for Jefferson City Public Works, said the snow was a lot lighter than expected and most of it melted as it hit the pavement.

The city's crews went out around 1 a.m., Rackers said, but didn't have to do much plowing. He said there was some slush around town and his crews treated some areas, especially the more hilly streets, with salt.

Adam Pulley, communication's director for the Missouri Department of Transportation's Central District, said Wednesday morning that road-clearing efforts were going well. Southern portions of the district primarily along the Interstate 44 corridor were hit the hardest, he said.

"The temperatures have helped us out a lot, especially up north," Pulley said. "We didn't get quite the amount of snow so things are going good."

He said MoDOT crews plowed state routes throughout the day Wednesday and had some crews on standby to watch conditions overnight.

With the potential for re-freezing, Pulley cautioned drivers to take it slow, increase following distance, buckle up and stay off cell phones.

Cpl. Kyle Green, spokesman for Troop F of the Missouri Highway Patrol, said officers received 43 calls for assistance between midnight Tuesday and about 8 a.m. Wednesday. Thirteen were stranded motorists, nine involved non-injury crashes and one was an injury crash. It's not the call volume he was expecting, he added.

"There are still slick spots on the roadways around the troop, and we're encouraging everyone still to be safe when they're out there, but obviously we didn't get the 3-5 or 4-6 inches of snow that people were expecting," he said.

Green said it didn't appear Mid-Missouri drivers significantly altered travel patterns because of the snow. Still, he urged caution around areas that might be slick, such as the shoulder of a highway.

"It didn't seem to turn into as big of a storm as was expected, but like I said, we're still working crashes where people are sliding off the road," Green said. "It is still dangerous out there. You just have to be careful."

While forecasts were off for the Jefferson City area, they were spot-on for parts of the state experiencing the worst of the storm.

"Where the heaviest band was expected to set up, it did, and it did in earnest," Deitsch said.

On Tuesday, Gov. Mike Parson issued an executive order directing the Missouri National Guard to help local communities respond to the storm. The State Emergency Management Agency advised him that snow, freezing rain, sleet, ice and low temperatures had the potential to cause "distress and hazard to the safety, welfare and property of the people of the State of Missouri beyond the capabilities of some local jurisdictions," he wrote in the executive order.

Lt. Col. Lindsey Decker, spokeswoman for the Missouri National Guard, said the agency hadn't been called to respond to any incidents by early Wednesday afternoon.

"We have alerted several hundred members who are on stand-by and prepared to respond across the state if needed," she wrote in a statement. "However, the State Emergency Management Agency and Missouri State Highway Patrol have not required assistance or support from the Missouri National Guard, at this time."

The governor's action, which expires Feb. 28, also extends previous orders that waived state statutes to allow propane providers to fill consumer tanks owned by Gygr-Gas, a Boonville provider that appeared to shutter its doors in December 2022.