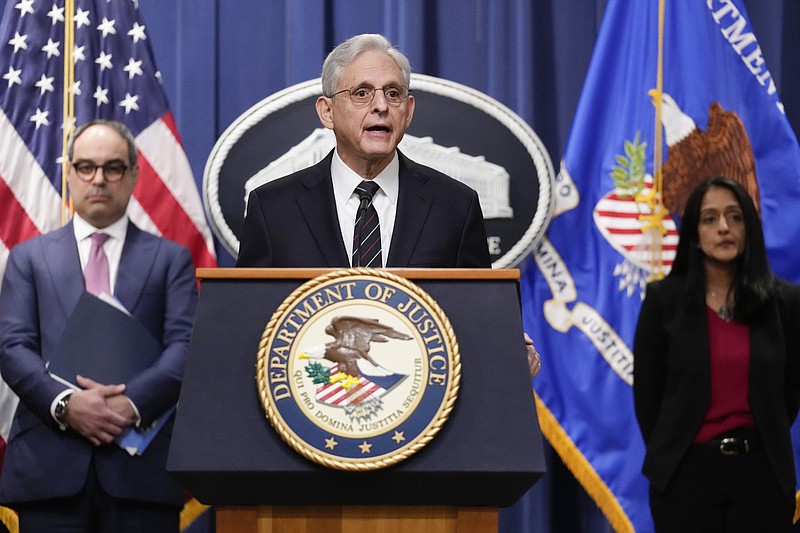 WASHINGTON (AP) -- The Justice Department and eight states filed an antitrust suit against Google on Tuesday, seeking to shatter its alleged monopoly on the entire ecosystem of online advertising as a hurtful burden to advertisers, consumers and even the U.S. government.

The government alleges that Google's plan to assert dominance in online ads has been to "neutralize or eliminate" rivals through acquisitions and to force advertisers to use its products by making it difficult to use competitors' offerings. It's part of a new, if slow and halting, push by the U.S. to rein in big tech companies that have enjoyed largely unbridled growth in the past decade and a half.

The antitrust suit was filed in federal court in Alexandria, Virginia. Attorney General Merrick Garland said in a press conference Tuesday that "for 15 years, Google has pursued a course of anti-competitive conduct" that has halted the rise of rival technologies and manipulated the mechanics of online ad auctions to force advertisers and publishers to use its tools.

In so doing, he added, "Google has engaged in exclusionary conduct" that has "severely weakened," if not destroyed, competition in the ad tech industry.

As a result, he added, "website creators earn less and advertisers pay more." And this means fewer publishers can offer their content without subscriptions, paywalls and other fees to make up for revenue.

The department's suit accuses Google of unlawfully monopolizing the way ads are served online by excluding competitors. This includes its 2008 acquisition of DoubleClick, a dominant ad server, and subsequent rollout of technology that locks in the split-second bidding process for ads that get served on web pages.

The lawsuit demands that Google break off three different businesses from its core business of search, YouTube and other products such as Gmail: the buying and selling of ads and ownership of the exchange where that business is transacted.

Digital ads currently account for about 80 percent of Google's revenue, and by and large support its other, less lucrative endeavors. But the company, along with Facebook's parent company Meta, has seen its market share decline in recent years as smaller rivals grab bigger portions of the online advertising market. On top of that, the overall online ads environment market is cooling off as advertisers clamp down on spending and brace for a potential recession.

Alphabet Inc., Google's parent company, said in a statement that the suit "doubles down on a flawed argument that would slow innovation, raise advertising fees, and make it harder for thousands of small businesses and publishers to grow."

Tuesday's lawsuit comes as the U.S. government is increasingly looking to rein in Big Tech's dominance, although such legal action can take years to complete and Congress has not passed any recent legislation seeking to curb the influence of the tech industry's largest players.

The European Union has been more active. It launched an antitrust investigation into Google's digital ad dominance in 2021. British and European regulators are also looking into whether an agreement for online display advertising services between Google and Meta breached rules on fair competition.

An internet services trade group that includes Google as a member described the lawsuit and its "radical structural remedies" as unjustified.

Matt Schruers, president of the Computer & Communications Industry Association, said competition for advertising is fierce and the "governments' contention that digital ads aren't in competition with print, broadcast, and outdoor advertising defies reason."

Dina Srinivasan, a Yale University fellow and adtech expert, said the lawsuit is "huge" because it aligns the entire nation -- state and federal governments -- in a bipartisan legal offensive against Google.

The current online ad market, Srinivasan said, "is broken and totally inefficient." The fact that intermediaries are getting 30 percent to 50 percent of the take on each ad trade is "an insane inefficiency to have baked into the U.S. economy." She called it "a massive tax on the free internet and consumers at large. It directly affects the viability of a free press" as well.

As with many highly complex technical markets, it has taken time for federal and state regulators and policymakers to catch up with and understand the online ad market. Srinivasan noted that it took a decade before they woke up to the perils of high-speed trading in financial markets and began adopting measures to discourage it.

Google held nearly 29 percent of the U.S. digital advertising market -- which includes all the ads people see on computers. phones, tablets and other internet-connected devices -- in 2022, according to research firm Insider Intelligence. Facebook parent company Meta is second, commanding nearly 20 percent of the market. Amazon is a distant, but growing, third at more than 11 percent.

Insider is estimating that both Google and Meta's share of the ad market will decline, while rivals such as Amazon and TikTok are expected to see gains.

This is the latest legal action taken against Google by either the Justice Department or local state governments. In October 2020, for instance, the Trump administration and 11 state attorneys general sued Google for violating antitrust laws, alleging anticompetitive practices in the search and search advertising markets.

Asked why the Justice Department would bring the suit when a similar complaint has already been filed by states, Assistant Attorney General Jonathan Kanter, the department's top antitrust official, said, "We conducted our own investigation, and that investigation occurred over many years." He said the Justice Department lawsuit, totaling roughly 150 pages, details "many facts, many episodes that individually and in the aggregate" reveal numerous monopolies.

Tuesday's lawsuit in essence aligns the Biden administration and new states with the 35 states and District of Colombia that sued Google in December 2020 over the exact same issues. 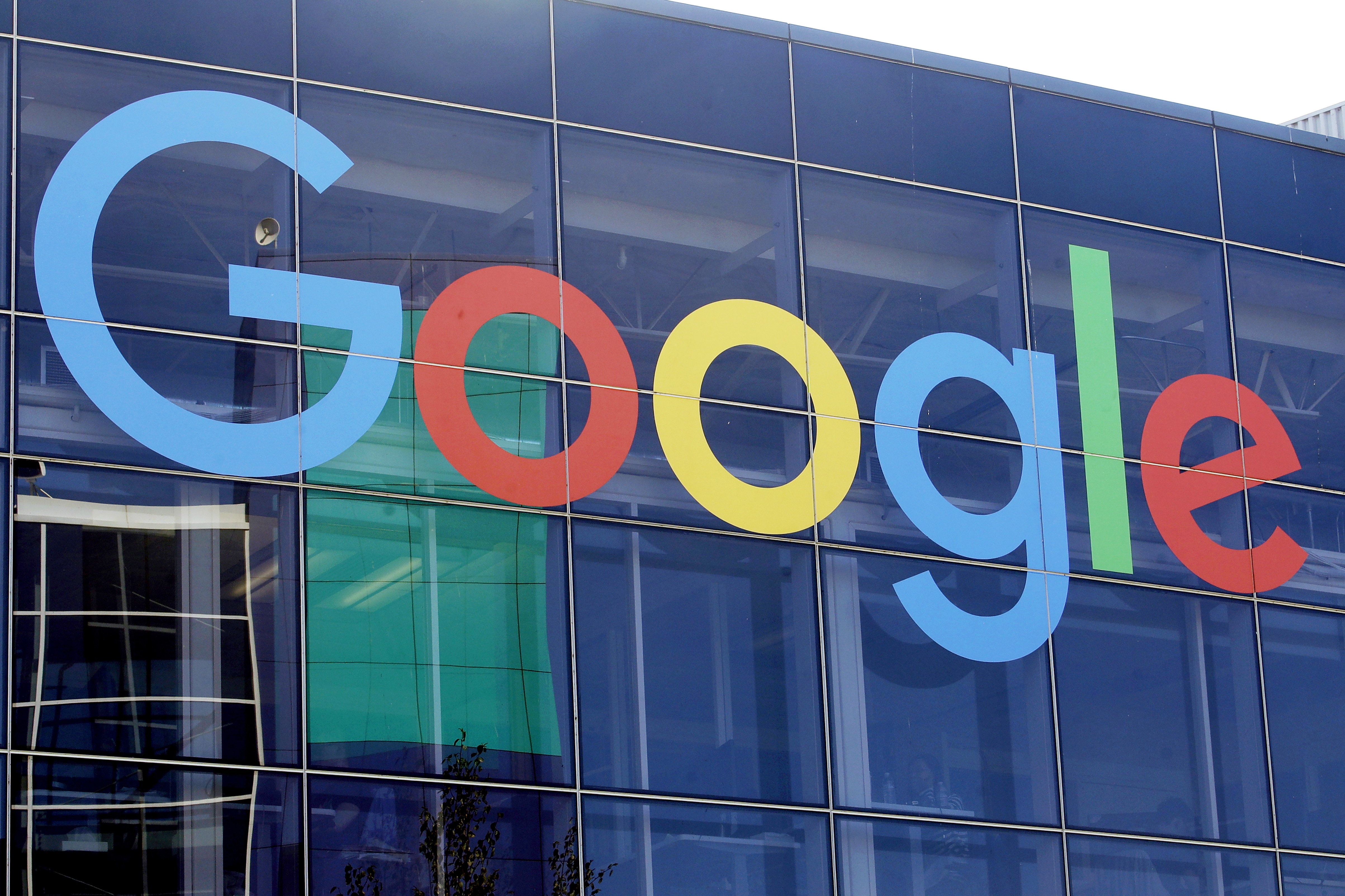 FILE - A sign is shown on a Google building at their campus in Mountain View, Calif., on Sept. 24, 2019. The Justice Department and several states sued Google on Tuesday, Jan. 24, 2023, alleging that its dominance in digital advertising harms competition. (AP Photo/Jeff Chiu, File) 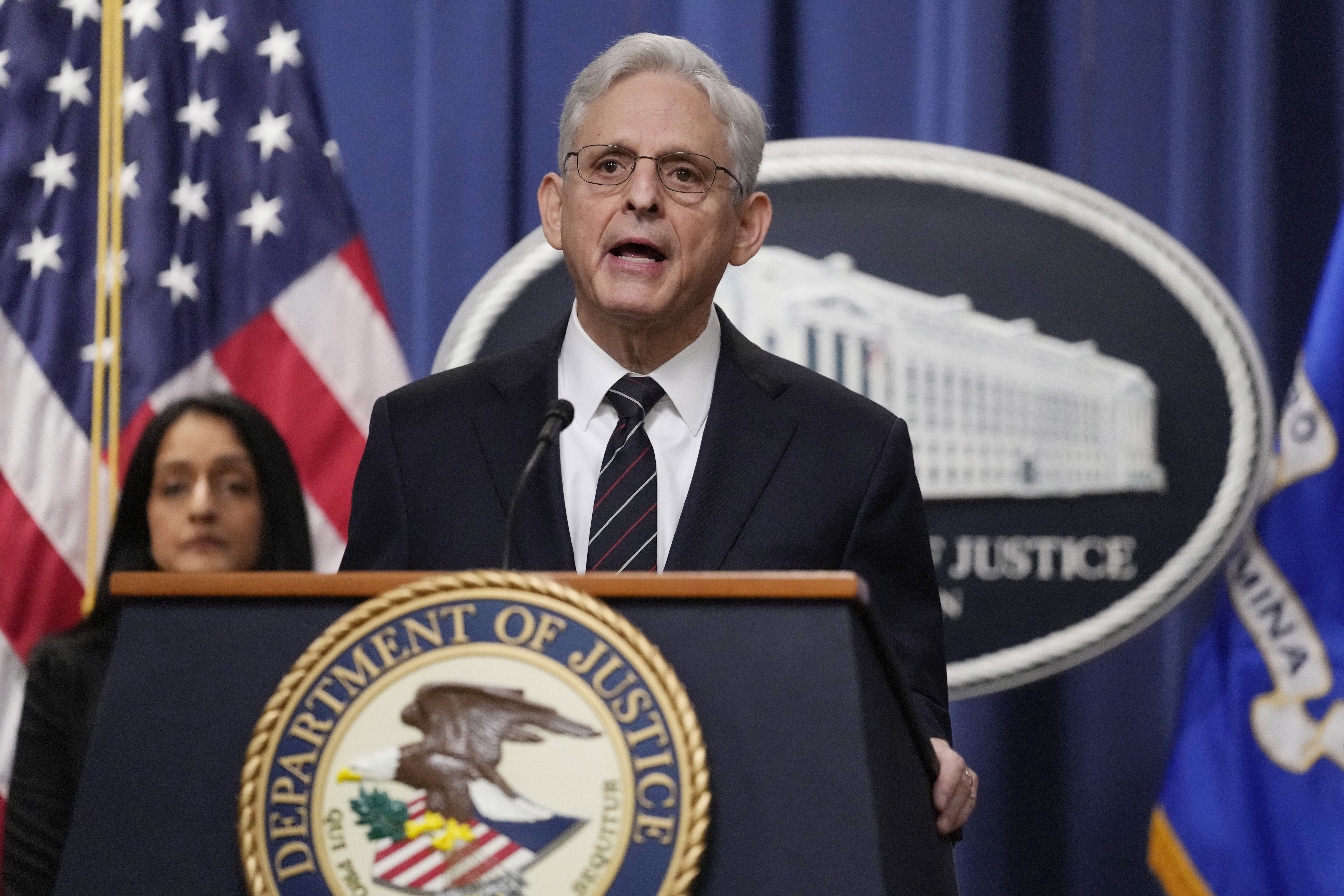 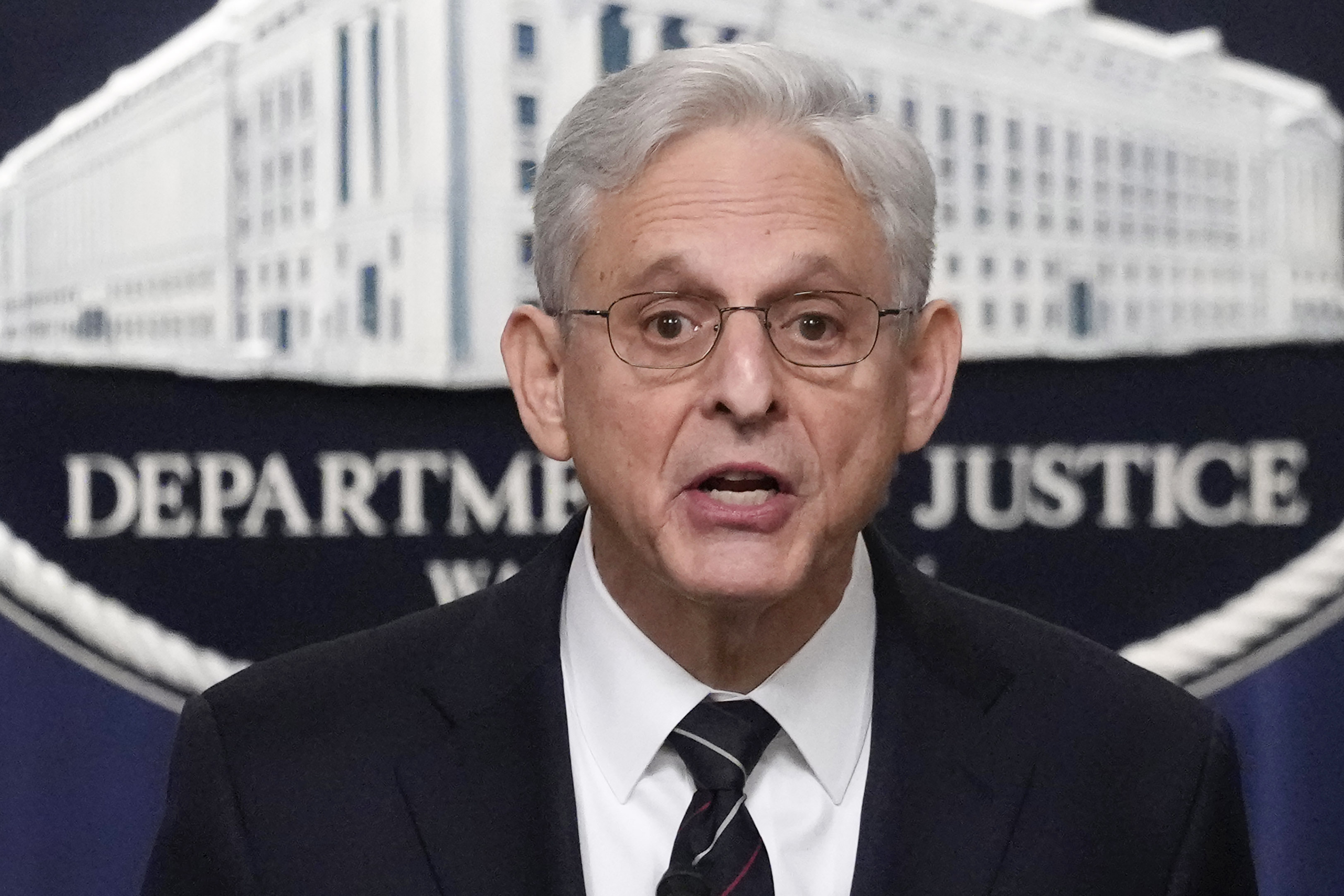 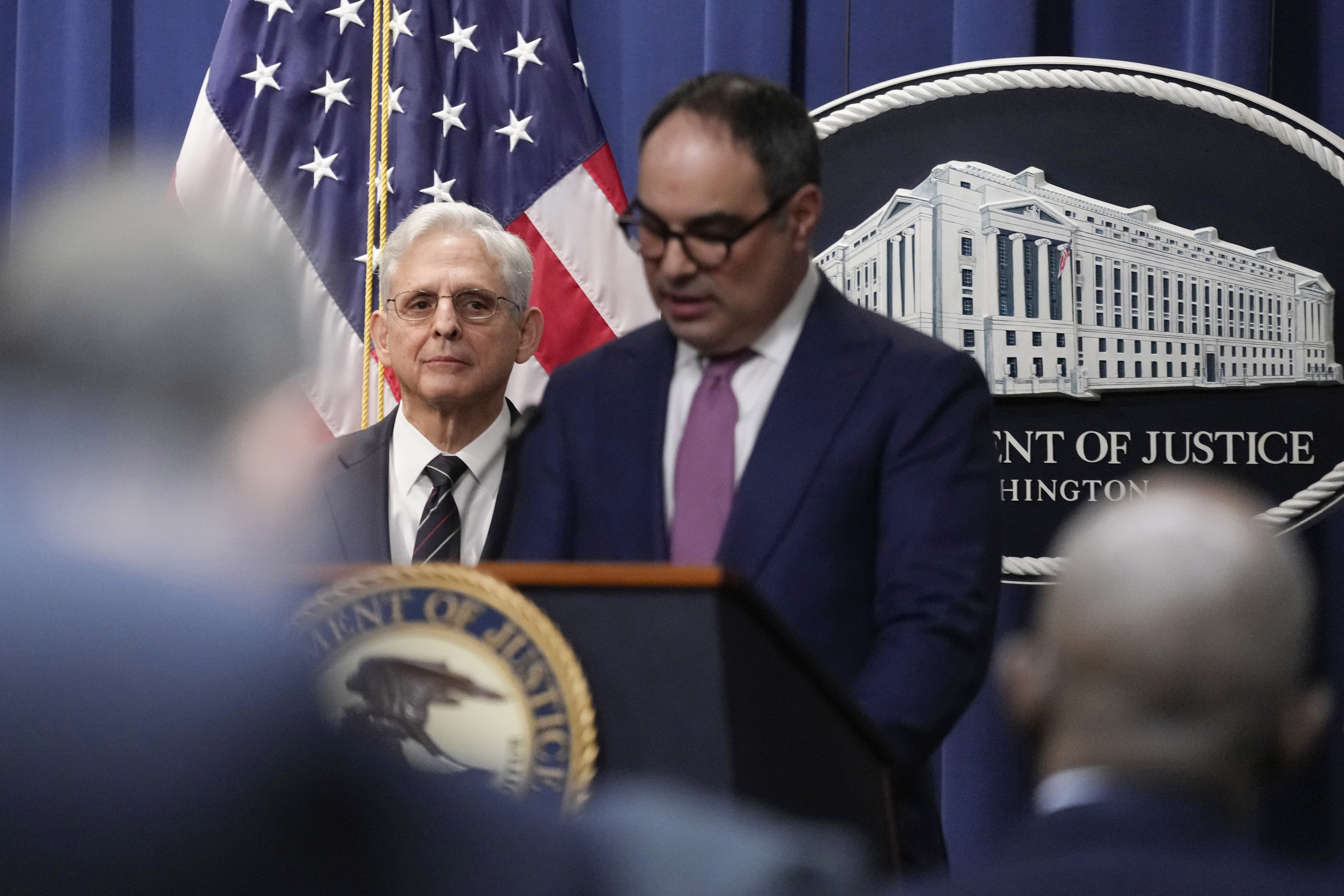