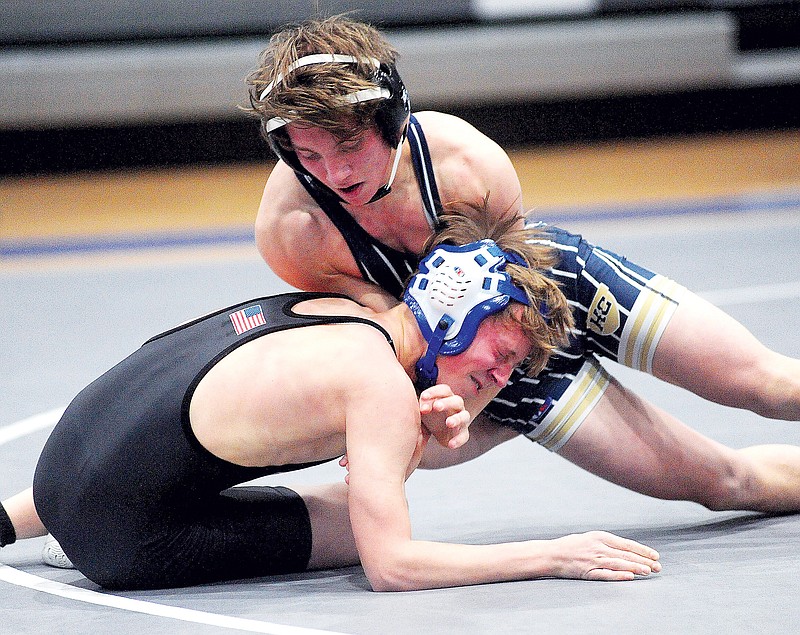 Only two matches went the distance as the Helias Crusaders beat the Capital City Cavaliers 53-24 in a Central Missouri Activities Conference dual Tuesday.

“Some of those closer matches will really come in clutch,” Helias coach Weston Keleher said. “We were able to come out on top in a couple and we may be able to steal a district seed that way.”

Capital City claimed the first six points by forfeit -- Ethan Wydra took the win at 106 pounds -- then the dual was almost all Crusaders in a matchup between Class 3 District 4 opponents at Capital City High School.

Evan Dunn earned a slap of the mat against Brady Hale at 113 pounds, needing only 3:46 to tie the dual at 6, then Aleksandr Careaga took a forfeit win for Helias at 120 to give the Crusaders the lead they would not give up.

Carter Prenger followed with a pin of AJ Kempker in 5:18 to take six points at 126.

“We wrestled tough with what we had,” Capital City coach Mitch Werdehausen said. “We’ve got some injuries, they’ve got some injuries, but they’re just a tough team. The middle of their lineup is really tough and they showed it tonight. … Kempker on Senior Night got a takedown on the second-ranked kid in the state, that was good. He did a great job for us.”

Demarkus Lyydon-Allen was able to stop the streak for Capital City when he turned a second-period takedown into a fall, earning the slap of the mat just ahead of the buzzer in 3:57 against Ben Holee, but the Crusaders got back to work with Jace Duemmel pinning David Ashcroft in 2:18. Duemmel totaled the points for a technical fall after a takedown with 1:44 left in the second period put him up 15-0, but he took Ashcroft directly to his back to earn the extra team point.

Carson Hayes then used three takedowns, two escapes, three three-point near falls and a two-point near fall to claim an 18-2 technical fall in 4:00 against Jeremiah Austin at 150, then Eli Homan needed only 1:00 to end his 157-pound match with Jacob Weaver with a pin.

Dugan Williams and Roberto Macias had the match of the night at 165.

Macias took Williams to the mat for a takedown in the first period, then escaped the down starting position in the second before forcing another takedown to go up 5-0. Williams escaped control to go into the final period down 5-1.

Williams started in the down starting position, was granted a clasping point to cut the lead to 5-2 then forced a reversal with 1:12 left to get within 5-4. Macias escaped control to go up 6-4, then took Williams down with 26 seconds left to extend to an 8-4 advantage.

Macias seemed to have the match won, but Williams forced a reversal with :08 left and immediately took Macias into a near fall, earning five points in the final 10 seconds to take a 9-8 decision.

Logan Montoya kept the Crusaders rolling with a pin of Nate Yoder in 2:48, after the pair had battled to a 6-4 Montoya lead heading into the second period.

“Some of our higher-ranked guys went out there and got falls, Logan Montoya and Carter Prenger,” Keleher said. “We’re very proud of them.”

Matthew Weigand got Capital City back on the board with a pin of Cody Suthoff in 4:26 at 190.

“Matt Weigand has been really showing up at 190,” Werdehausen said. “Starting to turn that corner and get a hunger for that competition.”

Then Hunter Barnhart and Hayden Miller battled to a 4-2 decision for Barnhart, who took Miller down in the third period to create the final margin.

“That’s where we might steal a district seed,” Keleher said. “Hunter Barnhart wrestled hard for a full six minutes and pulled it out at the end.”

The Cavaliers bookended the dual with Reyce Turner claiming a forfeit win at 285.

Capital City returns to the mat Thursday when it hits the road to face Fulton, before the Cavaliers close out the regular season with duals at Liberty (Saturday) and at Union (Feb. 1).

“My goal is to touch all parts of the state,” Werdehausen said. “This weekend we’re going to Liberty, they’ve got really tough schools up there. I told my guys, ‘We’re not gonna shy away from the competition.’ We’re gonna wrestle tough guys because if they make it to state, they’re gonna have to beat tough guys.”

Helias finishes up the CMAC portion of its schedule when it plays host to Sedalia Smith-Cotton on Thursday.