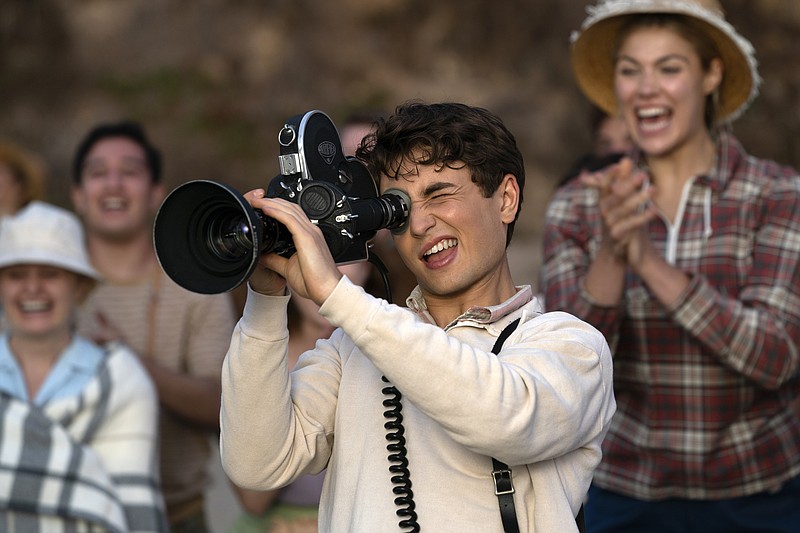 NEW YORK (AP) -- The multiverse-skipping sci-fi indie hit "Everything Everywhere All at Once" led nominations to the 95th Academy Awards as Hollywood heaped honors on big-screen spectacles like "Top Gun: Maverick" and "Avatar: The Way of Water" a year after a streaming service won best picture for the first time.

Daniel Scheinert and Daniel Kwan's "Everything Everywhere All at Once" landed a leading 11 nominations on Tuesday, including nods for Michelle Yeoh and comeback kid Ke Huy Quan, the former child star of "Indiana Jones and the Temple of Doom." Released back in March, the A24 film has proven an unlikely Oscar heavyweight against the expectations of even its makers. Yeoh became the first Asian actor nominated for best actress.

The 10 movies up for best picture are: "Everything Everywhere All at Once,""The Banshees of Inisherin," "The Fabelmans," "Tár," "Top Gun: Maverick," "Avatar: The Way of Water," "Elvis," "All Quiet on the Western Front," "Women Talking" and "Triangle of Sadness."

Nominations were announced Tuesday from the academy's Samuel Goldwyn Theater in Beverly Hills, California, by Riz Ahmed and Allison Williams. If last year's Oscars were dominated by streaming -- Apple TV+'s "CODA" won best picture and Netflix landed a leading 27 nominations -- movies that drew moviegoers to multiplexes after two years of pandemic make up many of this year's top contenders.

For the first time, two sequels -- "Top Gun: Maverick" and "Avatar: The Way of Water" -- were nominated for best picture. The two films together account for some $3.5 billion in box office. Tom Cruise missed out on an acting nomination, but "Top Gun: Maverick" -- often credited with bringing many moviegoers back to theaters -- walked away with seven nominations, including best sound, best visual effects and best song for Lada Gaga's "Hold My Hand." Ryan Coogler's "Black Panther: Wakanda Forever," made in the wake of Chadwick Boseman's death, also scored five nominations, including the first acting nod for a performance in a Marvel movie: Angela Bassett, the likely favorite to win best supporting actress.

Nine of the 10 best-picture nominees were theatrical releases -- something cheered by "Tár" filmmaker Todd Field, nominated for direction and screenplay. Field noted the theatrical marketplace -- especially the specialty business -- is still in recovery mode.

"I hope that the faith and the enthusiasm that's been paid for theatrical films continues," Field said by phone Tuesday from Los Angeles.

Going by earlier guild nominations, Martin McDonagh's Ireland-set dark comedy "The Banshees of Inisherin" may be the stiffest competition for "Everything Everywhere All at Once" at the Oscars. The Searchlight Pictures film landed nine nominations Tuesday, including nods for McDonagh's directing and screenplay, and a quartet of acting nominations: Colin Farrell for best actor, Kerry Condon for best supporting actress and both Brendan Gleeson and Barry Keoghan for best supporting actor.

Baz Luhrmann's bedazzled biopic "Elvis" -- another summer box-office hit, with $287.3 million worldwide -- came away with eight nominations, including a best actor nod for star Austin Butler and nominations for its costumes, sound and production design.

Though Steven Spielberg's "The Fabelmans" struggled to catch on with audiences, the director's autobiographical coming-of-age tale landed Spielberg his 20th Oscar nomination and ninth nod for best-director. John Williams, his longtime composer, extended his record for the most Oscar nominations for a living person, and, at 90, became the oldest nominee ever. Williams' 53rd nominations trails only Walt Disney's 59.

In the ultra-competitive best actress race, "Fabelmans" star Michelle Williams was nominated after being passed over by the Screen Actors Guild. The other nominees for best actress are: Ana de Armas, "Blonde"; Cate Blanchett, "Tár" and Andrea Riseborough, who emerged as a late contender after a host of celebrities rallied around her performance as an alcoholic West Texas mother in the little-seen "To Leslie." Notably left out of the category were Viola Davis ("Woman King") and Danielle Deadwyler ("Till").

Only one streaming title broke into the best picture field: The German WWI film "All Quiet on the Western Front." Though Netflix for the first time in years lacks a possible best picture frontrunner, "All Quiet on the Western Front" landed a better-than-expected nine nominations, including best international film and best adapted screenplay. The streaming service also has the top animated film contender in "Guillermo del Toro's Pinocchio," which was nominated for best animated feature alongside "Marcel the Shell With Shoes On," "Puss in Boots: The Last Wish," "The Sea Beast" and "Turning Red."

Along with Butler and Farrell, the best actor nominees are: Brendan Fraser, hailed for his comeback performance as an overweight shut-in in "The Whale," Bill Nighy for "Living" and, in a surprise for one of the most critically lauded films of the year, Paul Mescal, for Charlotte Wells' father-daughter tale "Aftersun."

Brian Tyree Henry landed his first Oscar nomination for his supporting turn in "Causeway," in which he starred opposite Jennifer Lawrence. (Said Tyree in a statement: "To the random man in the elevator who saw me scream at the news, thank you for hugging me and not freaking out!!!!!!") In the supporting actress category, two "Everything Everywhere All at Once" actors -- Jamie Lee Curtis and Stephanie Hsu -- were nominated along with Hong Chau ("The Whale"), Condon and Bassett.

Quan and Chau -- both the children of Vietnam War refugees -- and the California-born Hsu and the Malaysia-born Yeoh together make it the most acting nominations ever for Asian or Asian American actors. (Some count Merle Oberon, of Sri Lankan and Welsh heritage, the first Asian best actress nominee, in 1936, though she hid her ancestry.)

For Quan, a much-loved face of the 1980s from "Goonies" and "Temple of Doom," the nomination was a once-unfathomable pinnacle. After his acting opportunities dried up, Quan quit acting for years before being offered the part of Waymond. Speaking by phone from Los Angeles, Quan remembered having dreams as a child of attending the Academy Awards.

"It just seemed so far-fetched. Especially when I had to step away from acting for so many years, that dream seemed like it was dead," Quan said. "My whole thing was: I just wanted a job."

After the best director category saw back-to-back landmark wins for female filmmakers -- Chloé Zhao ("Nomadland") in 2021, Jane Campion ("The Power of the Dog") last year -- no women were nominated for best director. But in the best picture group, one of the up-for-grabs final slots went to Sarah Polley's "Women Talking," a parable of sexual assault and justice. Polley was also nominated for best adapted screenplay.

Along with "All Quiet on the Western Front," the nominees for best international film are: "Argentina, 1985" (Argentina); "Close" (Belgium); "EO" (Poland); "The Quiet Girl" (a first for Ireland). The category has been criticized for allowing submissions to be chosen by each country's government, a process that disadvantages filmmakers working in oppressive regimes. Iranian director Jafar Panahi, whose "No Bears" was hailed as one of 2022's best, was imprisoned earlier this year.

Current politics were also front and center in the documentary category. Nominees include "Navalny," an up-close portrait of the jailed Russian dissident Alexie Navalny; "A House Made of Splinters," about a Ukrainian halfway house; and Laura Poitras' "All the Beauty and the Bloodshed," about Nan Goldin's opioid activism. They were joined by the volcanologist romance "Fire of Love" and Shaunak Sen's "All That Breathes," about three men's efforts to save New Delhi's pollution-ravaged birds of prey.

The Academy of Motion Pictures Arts & Sciences will surely celebrate a best-picture field populated with blockbusters; according to data firm Comscore, their collective domestic box office of $1.574 billion is the most ever at the time of nominations. Last year's awards had been looking like a comeback edition before "the slap" came to define the ceremony. In the aftermath, the academy banned Will Smith from attending for the next 10 years. Though he could have still been nominated, Smith's performance as a runaway slave in "Emancipation" didn't catch on with voters.

But larger concerns are swirling around the movie business. Last year saw flashes of triumphant resurrection for theaters, like the success of "Top Gun: Maverick," but less stellar results for most dramas. Partially due to an inconsistent stream of major releases, ticket sales for the year recovered only about 70 percent of pre-pandemic business. Stocks for streaming services, meanwhile have plunged as Wall Street looked to streaming services to earn profits, not just add subscribers.

Last year's Oscar broadcast drew 16.6 million viewers, according to Nielsen, up from the record-low audience of 10.5 million for the pandemic-marred 2021 telecast. This year, ABC is bringing back Jimmy Kimmel to host the March 12 ceremony, one that will surely be seen as a return to the site of the slap.

This combination of photos shows Oscar nominees for best performance by an actor in a leading role, from left, Austin Butler in "Elvis," Colin Farrell in "The Banshees of Inisherin," Brendan Fraser in "The Whale," Paul Mescal in "Aftersun," and Bill Nighy in Living. (Warner Bros/Searchlight/A24/A24/Sony Pictures Classics via AP) 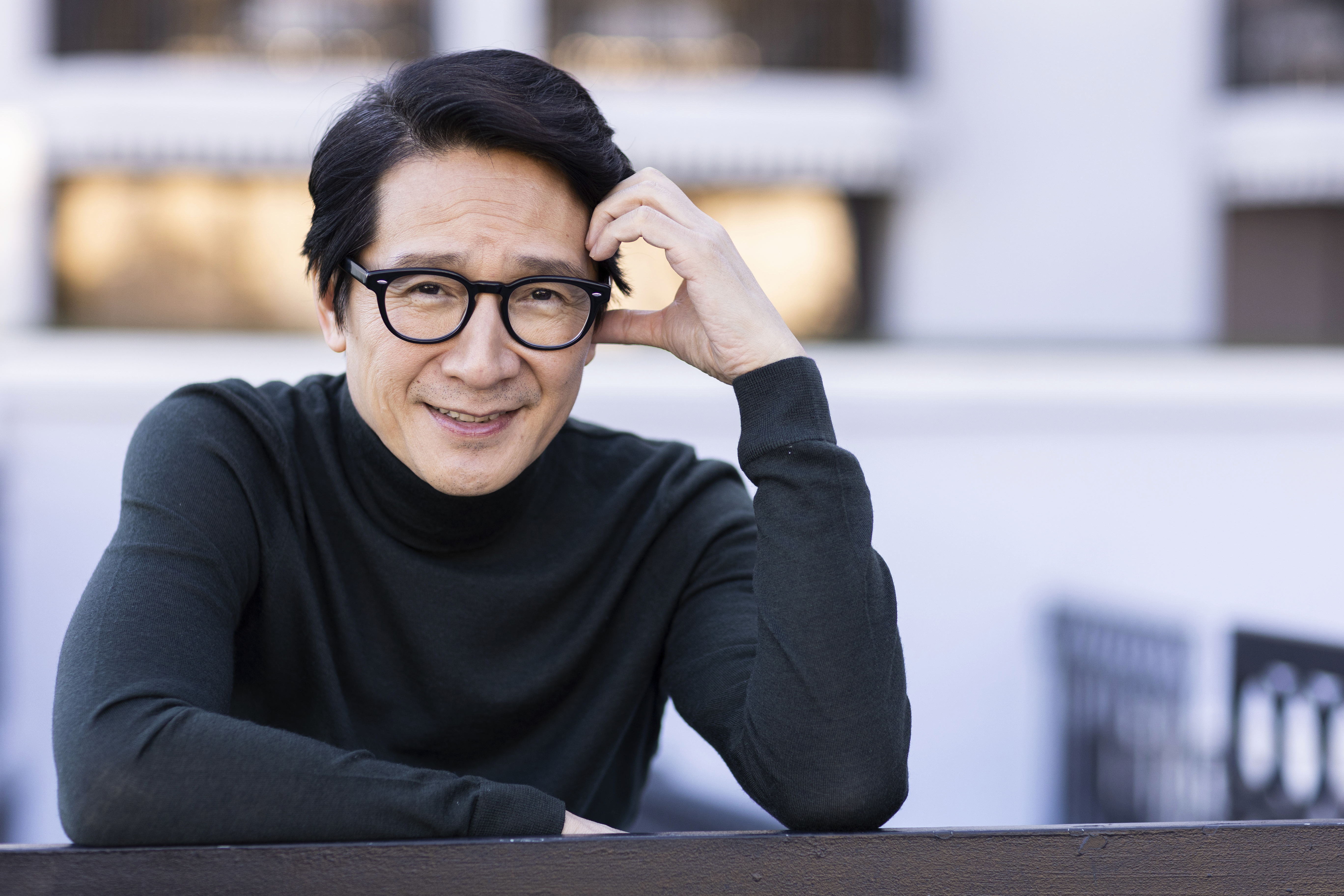 Ke Huy Quan, star of "Everything Everywhere All at Once," poses for a portrait on Sunday, Nov. 20, 2022, at The London Hotel in West Hollywood, Calif. (Photo by Dana Pleasant/Invision/AP) 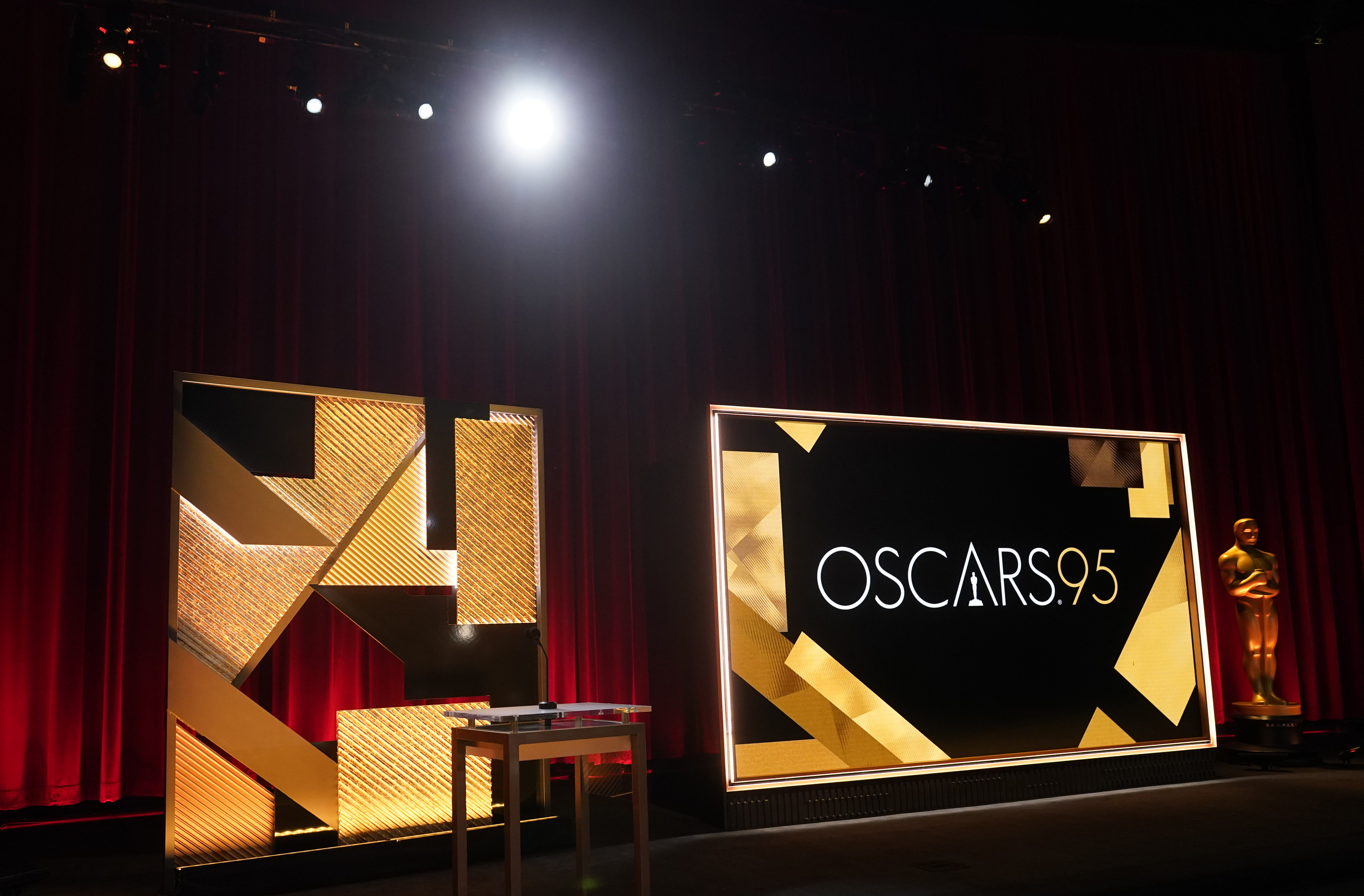 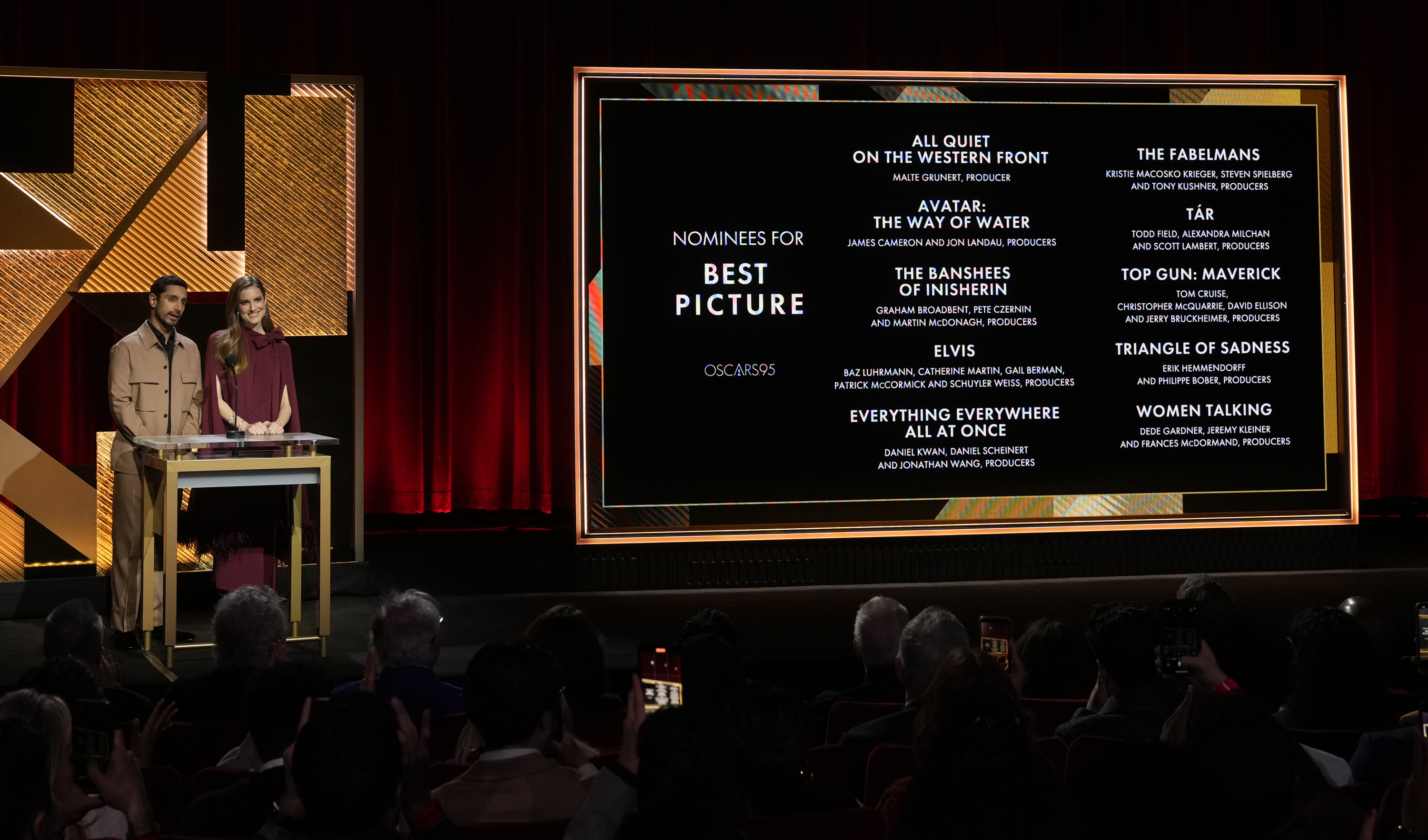 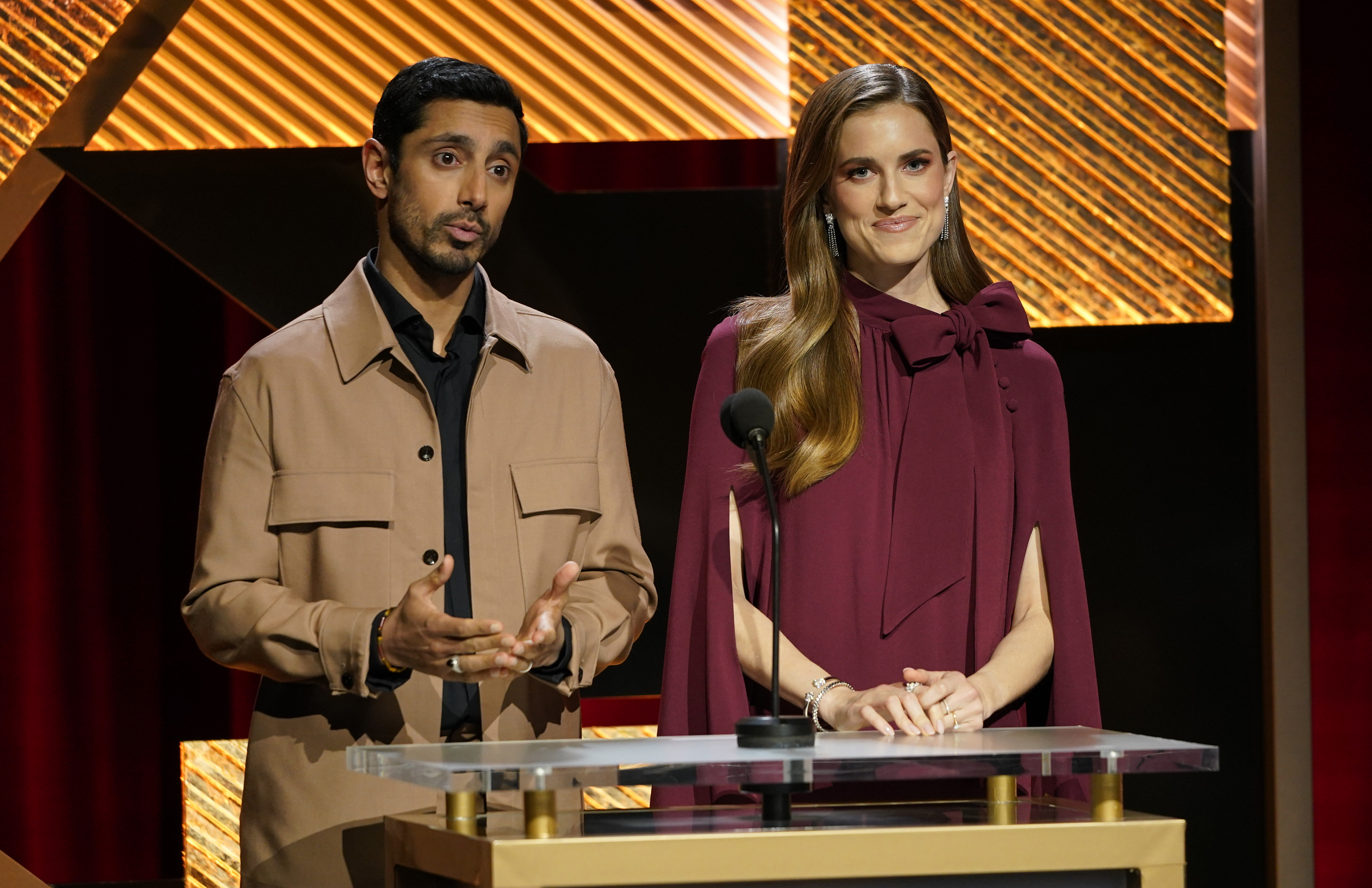