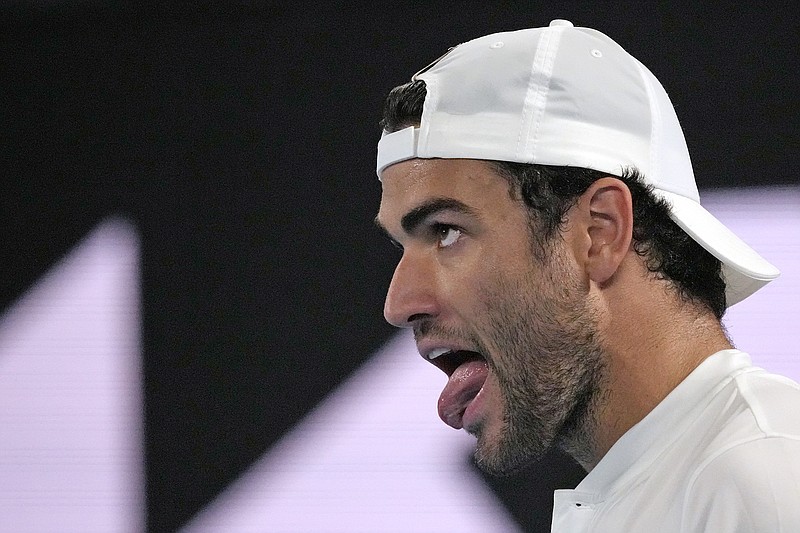 MELBOURNE, Australia -- When Matteo Berrettini missed what should have been a simple backhand on match point against Andy Murray in the first round of the Australian Open last week, the crowd inside Rod Laver Arena let out a collective gasp of disbelief.

As Murray moved in the wrong direction, leaving the court wide open, Berrettini dumped the ball halfway down the net. At the most important moment of his day, the Italian -- talented enough to be the Wimbledon runner-up in 2021 -- was unable to hit a shot he might make the other 999 times out of 1,000.

In tennis parlance, he “choked.”

Berrettini smiled right after that blunder but never recovered; Murray went on to win in a fifth-set tiebreaker.

“He had a pretty bad shot on the match point,” Murray said. “I was lucky there, for sure.”

Singles tennis is an individual sport, of course, so there are no teammates to cover for mistakes or provide help at key junctures. The attention falls on one athlete, which translates to plenty of praise for winners and, in certain circumstances, accusations of “choking” lobbed at losers -- fair or not.

It’s a versatile term, too. Sometimes, as with Berrettini, it is bandied about when a player flubs what appears to be a gimme shot on a crucial point. It also gets used when a high-ranked player is defeated by someone who is much lower-ranked. Or when someone throws away a big lead, such as when a man takes the first two sets of a best-of-five match at a Grand Slam tournament yet loses -- which happened seven times in the first two rounds in Australia. Or when someone is quite close to ending things but fails to seal the deal.

The word “choke” popped up all across Twitter on Monday after No. 9 Holger Rune, a 19-year-old from Denmark, gave away a lead of 5-2 in the fifth set, then leads of 5-0 and 7-2 in the first-to-10 tiebreaker that capped the match, in what became a loss to No. 5 Andrey Rublev.

Famously, Jana Novotna double-faulted when serving at 4-1, 40-30, against Steffi Graf in the third set of the 1993 Wimbledon final and never won another game. Gabriela Sabatini blew a 6-1, 5-1 lead against Mary Joe Fernandez at the French Open in the same year. In the 2004 men’s final at Roland Garros, Guillermo Coria was serving while ahead 6-0, 6-3, 4-4, 40-love, let that huge edge disappear and wasted two match points in the fifth set before Gaston Gaudio took the championship.

“The basic definition of ‘choking’ is the feeling of overwhelming anxiety that the athlete is unable to manage with his or her current defenses,” sports psychologist Tom Ferraro said.

Digging deeper, Ferraro said this sort of thing can occur “when an athlete unconsciously decides to stop focusing and eases up. This may be due to conflicts with aggression, guilt, fears of separating, shame or a repetition compulsion.”

Not surprisingly, many tennis players don’t like to hear about “choking.”

“It’s a harsh word,” said Jessica Pegula, an American who is ranked No. 3 and made it to the Australian Open quarterfinals in singles before losing Tuesday night.

“I think everyone kind of does it to some extent. I think it’s just because you get nervous. Some days there’s no rhyme or reason,” she said. “Some days, you can feel like you’re a little tense and, for some reason, you can feel like maybe the momentum is shifting in a match and you’re just putting a lot of pressure on yourself to do the right thing. I think maybe instead of thinking clearly, you’re panicking a little bit.”

Another point made by Pegula, whose parents own the NFL’s Buffalo Bills and NHL’s Buffalo Sabres, is that there is a big difference between being in the arena and rendering judgment from afar.

No. 8 seed Daria Kasatkina lost 6-1, 6-1 to 97th-ranked Varvara Gracheva in the first round in Melbourne, then said she “lost my mental battle with myself” after waiting around through two days of rain delays.

Kasatkina said that, in general, she doesn’t like the term.

“It depends how and when you use it, of course,” she said. “But when it’s people on the internet, after the bad matches, they say, ‘Ah, you choked’ -- it’s really bad.”

Mark Petchey, a former player who has coached Murray, was a TV announcer for the Murray-Berrettini match when that crucial backhand error arrived.

“It’s hard to believe he has missed that,” Petchey said on air. “He just needed to get it over the net.”

Petchey said in an interview later “choking” is a “complex subject, there’s no question about that, because it’s not just about mental frailty. It’s also about your technique.”

Looking at Berrettini’s miscue, Petchey noted that what it might have exposed more than anything are “flaws in his backhand.”

Pivotal lapses can also snowball, resulting in poorer play as a match progresses, because, Petchey said, “you want it too much.”

“Once you see the momentum get away from you,” he said, “it takes a very strong mind to get out of it.”

Players who let an advantage disappear often talk about how their arm felt like it was twice its normal weight or their legs weren’t effective anymore.

“Definitely, when you’re nervous, you freeze up,” Pegula said. “You don’t want to move your feet. You get a little tense on your serve.”

Petchey said the circumstances, the occasion and the opponent should also be taken into account.

“It’s always easy to say that they ‘choke,’” he said. “But if you force them to hit their worst shot, is that really ‘choking’? Or is that good play from the opponent on the other side that they force you to actually have to beat them with your least favorite shot?”

Berrettini, for his part, put what transpired simply.