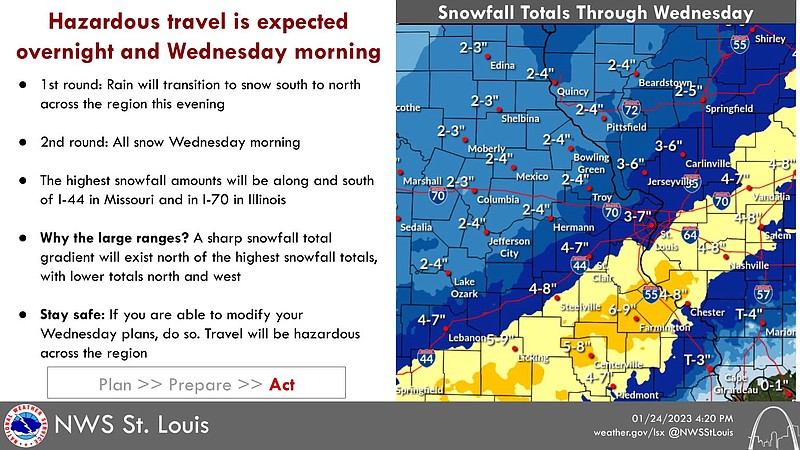 State, county and city plow crews are monitoring the storm and are prepared to respond.

"We're about as ready as we can be," said Russ Rackers, street manager for Jefferson City Public Works. "There's not much more we can do until it gets here."

Marshall Pfahler, meteorologist with the National Weather Service out of St. Louis, said the storm will move through Mid-Missouri between about 8 p.m. today and noon Wednesday, bringing with it up to 4 inches of widespread accumulating snow.

Jefferson City is north of the heaviest axis of snow, which is expected to impact just south of Interstate 44, Pfahler said.

"Right now, our latest forecast has snowfall amounts for Jefferson City of 2-4 inches falling during that time frame," he said, adding that the heaviest of the snow will exit the area by about noon Wednesday.

Pfahler said temperatures are expected to hang around 32 degrees, which will likely mean a wetter and heavier snow than the state typically sees.

The Missouri Department of Transportation is urging drivers to be aware of changing road conditions both where they are and where they plan to be.

"Crews will be out Tuesday night as the temperatures drop and conditions change from rain to snow," Becky Allmeroth, MoDOT's chief safety and operations officer, said in a statement. "We are expecting a very heavy, wet snow which is great for making snowmen but can make roads very difficult to drive on. If you must be out, adjust your speed to the road conditions."

Adam Pulley, communications director for MoDOT's Central District, said Monday afternoon was too early to tell how quickly crews around Mid-Missouri could clear roadways. Plow drivers will operate in 12-hour shifts until the roads are clear, he said.

The department's processes and routes are staying the same, he added. MoDOT will try to have plow drivers in the right places at the right times, he said, but nature is unpredictable. Pulley said MoDOT will know more about what to expect as the forecast develops over the next several hours.

Cole County Public Works Director Eric Landwehr said his department is well prepared for the storm. He said it will be similar to the last storm that hit, with wet heavy snow, but the conditions are actually better for his department this time.

Last storm, the weather reports all said there wouldn't be any snow. When heavy snowfall started during rush hour, Cole County's plow drivers had to jump into action to start clearing the roads.

This time, Landwehr said, they've had much better notice and less snow is expected to accumulate.

"Timing on this one is critical compared to the other one. On this one, it's gonna start later in the evening where hopefully most people are home whereas the one a week and a half ago was right during rush hour, which made it really, really rough," Landwehr said.

Today, the crews will load up all of the trucks they have parked inside, getting them "dressed out" for the storm. Landwehr said they'll be ready by the end of the work day so that when the snow starts in the evening the crews can get started immediately.

Rackers, with the city, said his team is also ready for the storm. He said all of his crews' equipment is dressed out for the snow and the drivers have all driven their routes.

Cole County's main plowing crew consists of 23 trucks with one driver each and some additional workers on standby to do grading on gravel roads. Landwehr said he's fully staffed, but many of the drivers are newer employees.

The city has 24 plow trucks on the main crew and a smaller group ready for the overnight shift. Similar to the county, many of the city's equipment operators are new to the department.

Rackers said 25 percent of his drivers are new this winter. The crew also has two open positions, he said. The department's wastewater division has been helping out while the positions are unfilled.

So far this winter season, the county has used around 500 tons of salt. Landwehr said they still have around 4,000 tons stockpiled and can easily buy more if needed.

Rackers said the city just received a new shipment of salt, so it's fully stocked.

Pulley advised drivers to be prepared and check MoDOT's Traveler Information Map if they're expecting to travel.

The department also urges drivers to stock a full tank of gas, blankets, gloves, water, snacks and other provisions for an emergency. If a driver slides off the road or is involved in a crash, MoDOT suggests staying in the vehicle until help arrives.