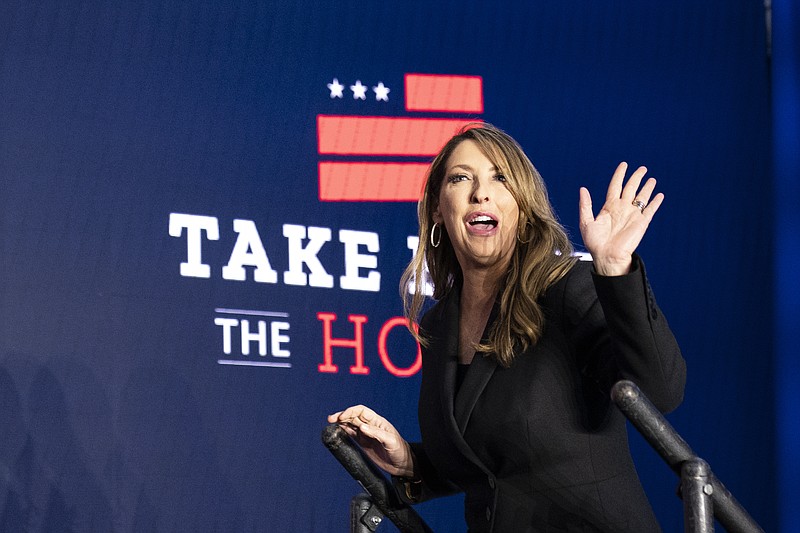 FILE - Republican National Committee chair Ronna McDaniel arrives on stage before House Minority Leader Kevin McCarthy of Calif., speaks at an event on Nov. 9, 2022, in Washington. The race for RNC chair will be decided on Friday by secret ballot as Republican officials from all 50 states gather in Southern California. McDaniel is fighting for reelection against rival Harmeet Dhillon, one of former President Donald Trump’s attorneys. (AP Photo/Alex Brandon, File)

NEW YORK (AP) -- By week's end, the Republican National Committee is set to resolve a bitter leadership feud that has exposed perilous divisions within a party that has struggled to move past a disappointing midterm ahead of a critical race for the White House.

Those inside the fight believe the days ahead of Friday's secret ballot at a luxury seaside resort could get even uglier as rebel forces within former President Donald Trump's "Make America Great Again" movement threaten to upend RNC Chair Ronna McDaniel's reelection bid.

The attacks have been led by McDaniel's chief rival, Harmeet Dhillon, a Trump attorney who has accused the incumbent of religious bigotry, chronic misspending and privately claiming she can control the former president -- allegations McDaniel denies. Also in the race is My Pillow CEO Mike Lindell, a pro-Trump conspiracy theorist who secured enough support to qualify for the ballot.

Trump hasn't made a public endorsement, but he and his team are privately advocating for McDaniel, whom he tapped for the position shortly after his 2016 victory. Still, many Trump loyalists blame McDaniel, the niece of Utah Sen. Mitt Romney, for some of the party's recent struggles.

In an interview, Dhillon insisted that the overwhelming majority of Republican voters want a leadership change at the RNC. She warned of serious political consequences for any of the committee's 168 elected members who support McDaniel's reelection.

"For those members of the party who vote not with what the people in their state want but with what their own self-interest is, the next time they're up for election, it's going to be an issue," Dhillon told The Associated Press.

Apprised of Dhillon's statement, McDaniel said, "That sounds like a threat." She condemned the increasingly ugly attacks against her and the divisions plaguing the committee.

"There's nobody who's enjoyed this more than Democrats. I know, because I love it when they're fighting each other," McDaniel said.

Friday's vote for RNC chair serves as the latest high-profile leadership test for a deeply divided Republican Party grappling with questions about its future -- and Trump's influence -- ahead of the 2024 presidential election. The infighting was on public display earlier this month as House Republicans almost came to blows before uniting behind House Speaker Kevin McCarthy, undermined by the same MAGA forces threatening McDaniel this week.

In both cases, Trump has struggled to control his own loyalists, who seem intent on fighting the status quo -- whether McCarthy or McDaniel -- no matter the cost.

Seeking to influence the vote, a group of Florida Republicans from the party's MAGA wing moved last Friday to hold a vote of "no confidence" in McDaniel, which Republican groups in a handful of other states have done in recent weeks as well. But the Florida gathering, which drew leading McCarthy detractor Rep. Matt Gaetz, R-Fla., fell far short of reaching the quorum needed to hold an official vote. 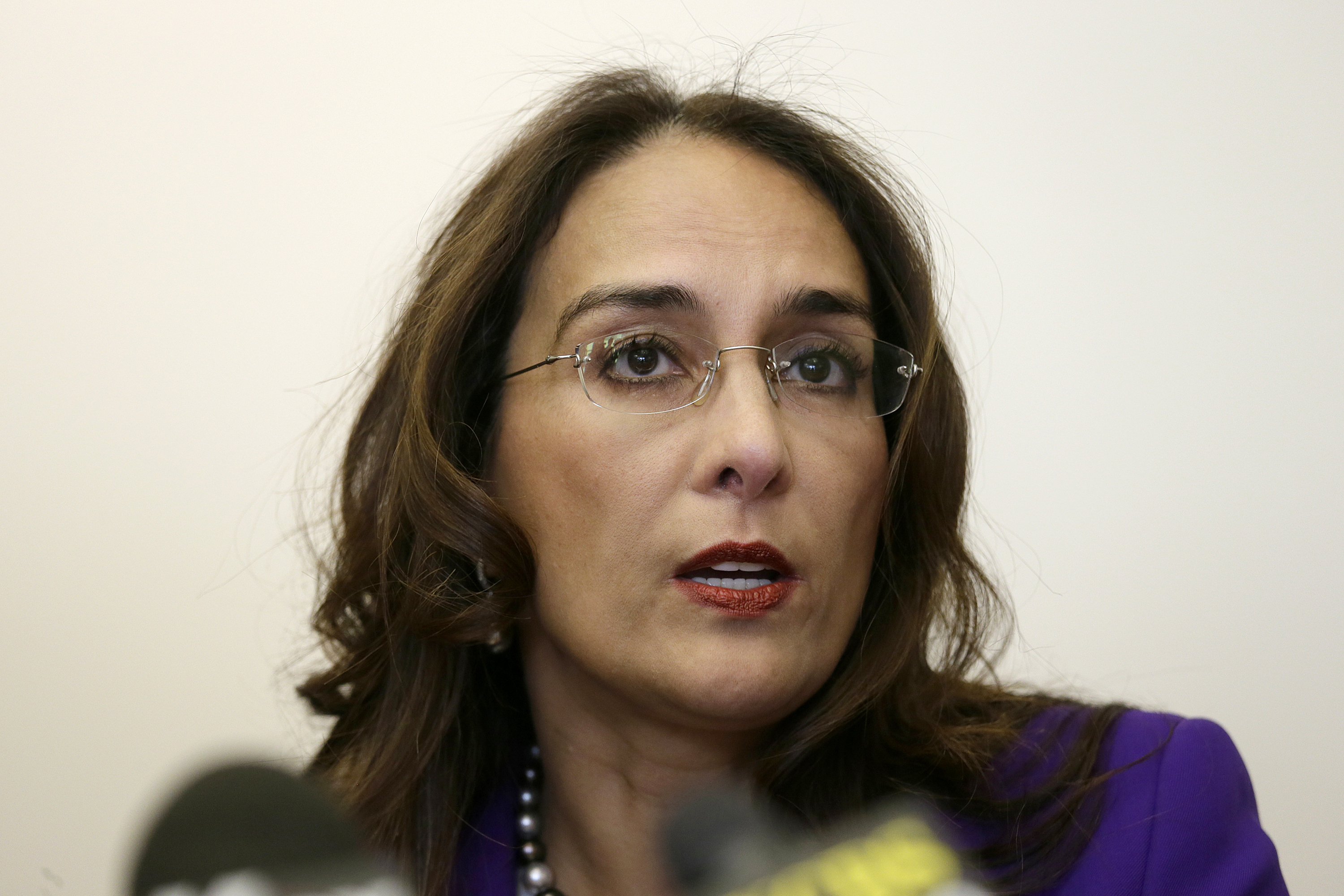 FILE - Attorney Harmeet Dhillon speaks during a news conference in San Francisco, April 24, 2017. The race for RNC chair will be decided on Friday by secret ballot as Republican officials from all 50 states gather in Southern California. Current RNC Chair Ronna McDaniel is fighting for reelection against Dhillon, one of former President Donald Trump’s attorneys. (AP Photo/Eric Risberg, File) 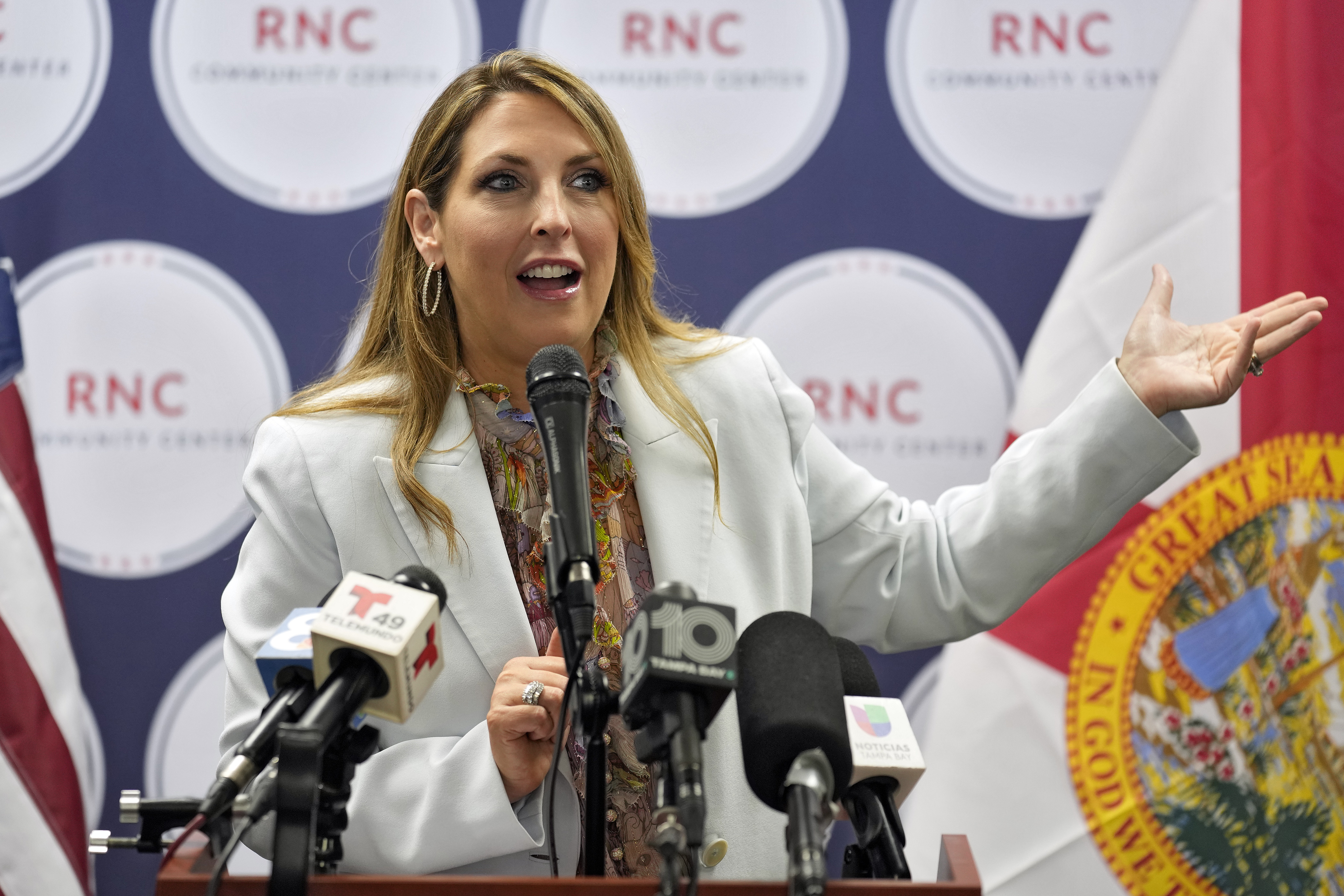 FILE - Republican National Committee chairman Ronna McDaniel speaks during a Get Out To Vote rally on Oct. 18, 2022, in Tampa, Fla. The race for RNC chair will be decided on Friday by secret ballot as Republican officials from all 50 states gather in Southern California. McDaniel is fighting for reelection against rival Harmeet Dhillon, one of former President Donald Trump’s attorneys. (AP Photo/Chris O'Meara, File)