Niners defense steps up in divisional round win 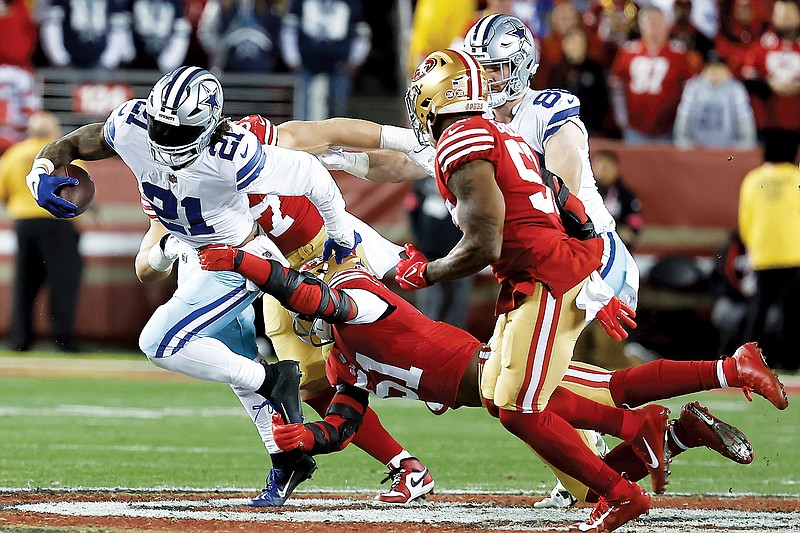 SANTA CLARA, Calif. -- The San Francisco 49ers defense hadn’t been playing up to its usual high level in recent weeks, allowing a few too many big plays.

On a day when the offense struggled to produce, the Niners defense responded with a signature performance that sent them back to the NFC Championship Game.

Fred Warner had one of San Francisco’s two interceptions against Dak Prescott and the Niners allowed only one touchdown in a 19-12 divisional-round win Sunday against the Dallas Cowboys.

“It sure felt like us,” Warner said. “Obviously we know that we’ve got to play big-time football in the playoffs to have a chance to win this next game.”

The 49ers will try to build on that performance this Sunday when they visit Philadelphia for the NFC title game.

With Nick Bosa and Arik Armstead providing the pressure up front, Warner controlling the middle of the field, and Jimmie Ward and Talanoa Hufanga controlling the deep end, the Niners allowed very little to the Cowboys.

San Francisco (15-4) looked much more like the dominant unit from early in the season than the one that had some slipups late in the season against Washington, Las Vegas and Seattle in the playoff opener.

“We went out there and from the very first snap, the energy was on 10 and so that was kind of our mantra,” Hufanga said. “A lot of people always tell us, our defense has to beat their defense, and that’s when those things happen and great teams can win. So when we look at it like that, you hold a great offense to just under 17 points, under 15 points, you try to hold those goose eggs, that’s when great defense is happening.”

• What's working: The second-half run game was working for the Niners. After being bottled up on the ground in the first half with just 27 yards on 11 carries, the running game keyed two long drives in the second half. San Francisco had 21 carries for 86 yards after halftime, with 70 of those yards coming on the two scoring drives.

Elijah Mitchell and Christian McCaffrey each had three first downs rushing in the second half after San Francisco had only one as a team in the first two quarters.

• What needs work: The end of half clock management needs some work. The 49ers almost squandered a scoring chance late in the first half thanks to some questionable clock management. Coach Kyle Shanahan let about 25 seconds run off the clock before calling a timeout with 30 seconds left before a third-and-1 play.

The Niners converted and got into field-goal range, but could have had a chance at a TD with more time. They did get the field goal after Brock Purdy almost let the half run out before throwing the ball away.

• Stock up: Warner delivered one of his better performances of the season. Warner led the Niners with nine tackles, including one for a loss. He also had an interception in the red zone late in the first half and had perfect coverage 30 yards downfield on a third-down pass to CeeDee Lamb that led to a Dallas punt from the San Francisco 40 with the game tied at the end of the third quarter.

• Stock down: The Niners had some issues on special teams with Ray-Ray McCloud losing a fumble on a punt return that set up a field goal for Dallas. The kick coverage unit also allowed KaVontae Turpin to have returns of 44 and 36 yards. The bright spot on special teams was kicker Robbie Gould, who made all four field goals to improve to 29-for-29 in the postseason for his career.

• Injuries: McCaffrey (calf), Mitchell (groin) and DL Charles Omenihu (oblique) are all day to day. Shanahan said he expects all three to be able to play Sunday. … Shanahan said he doesn’t expect QB Jimmy Garoppolo to return to practice this week.

• Key numbers: 200 and 0. Purdy has thrown for at least 200 yards in both playoff games and hasn’t committed a single turnover. He’s the only rookie QB in the Super Bowl era to do that even once in the playoffs. Purdy joined Joe Flacco (2008) and Mark Sanchez (2009) as the only rookie QBs to win two playoff starts. He’s looking to become the first to make the Super Bowl after Flacco, Sanchez, Ben Roethlisberger (2004) and Shaun King (1999) all lost in the conference title game.