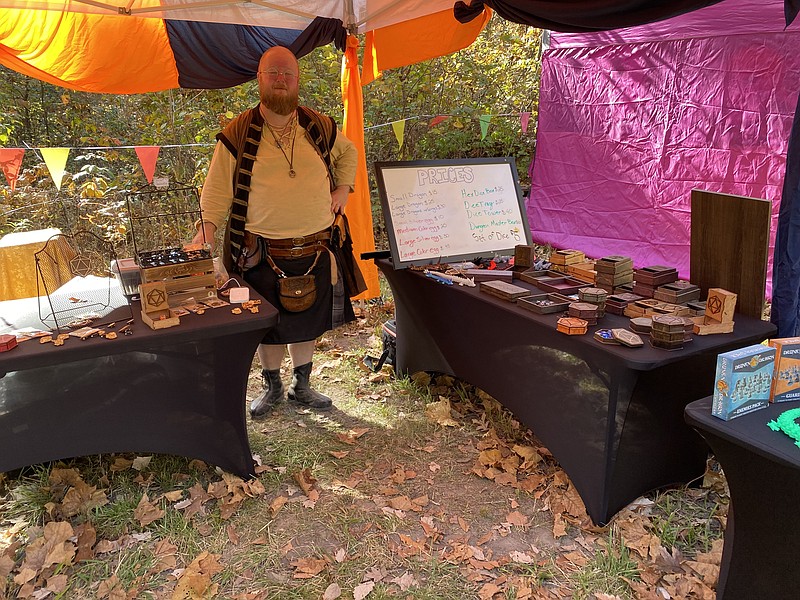 Anakin Bush/Fulton Sun photo: The Drunk'n Dragon was one booth Saturday, Oct. 22, 2022, at the Central Missouri Renaissance Festival, where they sold handmade items out of leather and wood. This was the first year Drunk'n Dragon participated in renaissance festivals as a vendor, although they have previously sold their items online.

The Central Missouri Renaissance Festival announced the first round of dates for their 2023 season.

The season will begin Saturday, April 29 and Sunday, April 30. The other weekend announced is May 6 and 7.

For all dates, the festival will run from 10 a.m.-6 p.m. It will continue rain or shine, according to the festival's website.

The festival aims to imitate what life was like in the 1550's in Carlingford, Ireland.

A variety of vendors and merchants attend the festival. There is also a food court and other restaurants available.

A rotating cast of live musical acts are featured at the event. One of the featured bands from last year's renaissance festival was Pictus, a band that plays primal drums and bagpipes.

Live entertainment shows are also featured at the festival, such as armored duels and comedy groups.