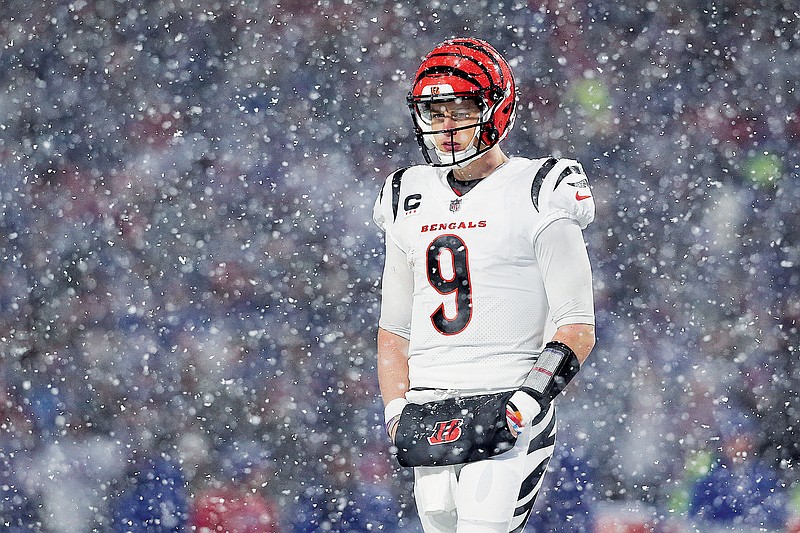 Bengals quarterback Joe Burrow stands as snow falls during the second half of Sunday’s divisional round game against the Bills in Orchard Park, N.Y. (Associated Press)

CINCINNATI -- The Cincinnati Bengals went into Buffalo feeling disrespected and played their most complete game of the season.

With tickets on sale last week for a potential neutral-site Buffalo-Kansas City AFC Championship Game, the Bengals came into a snowstorm and dominated the second-seeded Bills.

Cincinnati’s 27-10 win -- its 10th in a row -- sets up a rematch Sunday with Patrick Mahomes and the top-seeded Chiefs in the AFC Championship Game.

The Bengals are peaking in the playoffs again, and nobody is more confident than quarterback Joe Burrow, who said this team is better this last year’s. That squad won 27-24 in overtime at Kansas City to advance to the Super Bowl, where it lost 23-20 to the Los Angeles Rams.

“We’re a more complete team and a better team,” Burrow said. “We just seem to make plays when it counts.”

With three backups playing on the offensive line against Buffalo, it was hard to predict how efficiently the Bengals’ offense could operate.

It couldn’t have gone much better.

Burrow completed 23-of-36 passes for 242 yards and two touchdowns. He had zero turnovers and was sacked just once. He completed passes to eight different receivers.

“Unbelievable,” running back Joe Mixon said. “To come through in the snow and deliver dots the way he was doing it, that’s crazy. I’m going to be honest, that’s crazy. I’ve never seen anything like it, to be real.”

Mixon had a big game, too -- a welcome development considering the Bengals’ running game had stalled in recent weeks. He rushed for 105 yards, averaging 5.3 per carry, and a touchdown. It was Mixon’s first 100-yard game since Nov. 6 and only his second this season.

• What's working: Just about everything was working Sunday. Cincinnati was balanced on offense, picking up 30 first downs, converting 6-of-10 third downs and finishing with 412 total yards -- including 172 on the ground, its most since Nov. 6.

The defense limited Buffalo to 63 rushing yards and kept constant pressure on quarterback Josh Allen, who was hit eight times and sacked once. The Bills’ top receiver, Stefon Diggs, finished with four catches for 35 yards.

• What needs help: As far as the Bengals are concerned, the NFL’s decision-making process could use some work. The league began selling tickets for a possible game in Atlanta that was dependent on the Bills and Chiefs winning last weekend. The NFL had decided on the first-of-its-kind, neutral-site conference championship because the Bills (13-3) finished the season a half-game behind the Chiefs (14-3) after their game at Cincinnati was canceled Jan. 2 when Bills safety Damar Hamlin went into cardiac arrest and had to be resuscitated on the field.

The Bengals felt disrespected by that plan and were determined to ruin it.

“They keep talking us down, and we’ll keep showing up,” receiver Ja’Marr Chase said.

• Stock up: Jackson Carman had not played tackle for the Bengals since he was drafted in 2021. Carman was pushed into service at left tackle after Jonah Williams dislocated a kneecap in the wild card-round playoff win against Baltimore. Backups Hakeem Adeniji and Max Scharping were already starting on the right side because of injuries. The O-line has hardly looked better than it did Sunday, when it dominated Buffalo’s defensive front on a snowy field.

• Stock down: WR Tyler Boyd had just one catch for 23 yards Sunday.

• Injuries: C Ted Karras suffered a knee injury during Sunday’s game but played through it. He said he’ll be OK for the AFC Championship Game. … Williams and G Alex Cappa (ankle) are considered week to week.

• Key number: 5 -- Number of career postseason wins for Burrow, the most for any Bengals quarterback.

• Net steps: Beat Mahomes and the Chiefs on Sunday for the fourth time in the span of about 13 months and the Bengals will earn a second consecutive trip to the Super Bowl. Mahomes suffered a high ankle sprain Sunday that could limit his mobility.

“I hope that (Mahomes) is healthy,” Cincinnati safety Jessie Bates III said. “I hope that he is 100 percent healthy so there is no excuses. We’ll be ready.”