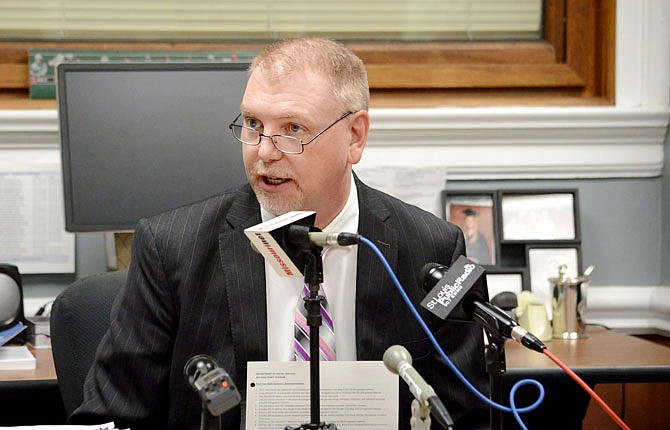 Missouri state Budget Director Dan Haug answers questions from the media Wednesday, Jan. 16, 2019, during a press conference at his office in the state Capitol.

The state workforce’s high turnover rates have improved with prior pay increases, a trend State Budget Director Dan Haug said he hoped would continue with the latest proposed cost of living adjustment.

Haug said Missouri government's workforce faced an overall turnover rate exceeding 30 percent before a minimum pay hike and additional adjustments were implemented early last year, dropping to around 27 percent by the end of 2022.

In order to keep drawing that number down, Haug said, an investment in the workforce to battle inflation concerns and private sector competition were essential components to consider.

“This year with those pay increases, we’ve gotten down to 27 percent. That’s still way too high. But I do think it shows the effectiveness of trying to do these pay increases, and I think we’re starting to make progress. I think we’ll continue that progress,” Haug said. “There are items that are going to figure out with the pay plan: One is inflation, and what is happening to the purchasing power of our employees. We try to continue to keep up with that to some extent and then also the competitiveness of the labor market we’ve seen.”

Haug walked lawmakers on the House Budget Committee through Gov. Mike Parson’s emergency supplemental budget request, which includes a proposed 8.7 percent cost of living adjustment (COLA) for state employees. The request would also up the shift differential — an extra bump in pay for those working outside of normal business hours — for congregate care staff within the Department of Social Services

The governor’s office said the proposal was formulated based on the increase given this year to Social Security recipients and the U.S. Department of Labor’s Consumer Price Index, which measures the change in price for consumer goods and services over time.

After it was unveiled and later touted as part of Parson’s State of the State address, the proposal took its first steps in the legislative process during Monday’s hearing. Haug said many departments and job sectors within state government were reeling from extreme turnover rates, with the lowest turnover rate at 11 percent. The Department of Higher Education faced a 37 percent turnover rate as of the end of the year, with DMH and the Department of Revenue (DOR) up to 35 and 34 percent, respectively, Haug said.

While the increase would prove a boon for these struggling offices, Haug said the state would likely never reach the private market under current economic conditions, though it nearly has in the past. Haug said his office had conducted surveys pre-pandemic and the legislature had funded the state workforce to near-market level before COVID-19 shook up the economy.

And the state isn’t the only sector making these moves: Haug said previous increases had attempted to get employees at health and mental health facilities in Fulton on par with the area’s massive Dollar General distribution center’s pay. The pay increase bolstered competitiveness, Haug said, until the warehouse upped its wages by 23 percent to $21 an hour.

Rep. Peter Merideth, a St. Louis Democrat and ranking minority party member of the committee, questioned whether the increase would be enough to strengthen the workforce as other employers implement even more drastic wage hikes and the state’s attempts yield smaller results.

“It doesn’t sound like we’re actually taking the bold step of using the money we have to fix the problem. We’re trying to stem the bleeding, just slightly, by keeping up with a cost of living increase, but we’re not keeping up with the wages in the market,” Merideth said. “We’re not keeping up with the fact that our state workers were already underpaid, even before the economic changes that have happened. So I don’t want to look a gift horse in the mouth, but again, it doesn’t seem like it’s actually going to fix the problem.”

Haug said there were other incentives on their way through the regular budget, including counseling programs for corrections employees. He said departments had been surveyed on their needs and suggestions to bolster the workforce.

Haug noted the bill as filed did not include judiciary employees, such as those working in juvenile centers, under the shift differential portion. House Budget Committee Chair Rep. Cody Smith, the bill’s sponsor, said they would be added to the bill as the legislative process moves forward.

Parson called on lawmakers to pass the bill to his desk by March 1 to ensure the workforce felt its impact quickly, something Haug encouraged as well.

“It really makes a big difference to state employees that you guys appreciate them enough to do something like this and go the extra mile,” Haug told the committee. “If we do this by March 1, I think this really shows that we understand that we need to try and compensate fairly.”

The bill must face possible amendments and a vote in the committee before it heads to the House floor for the full chamber’s consideration.