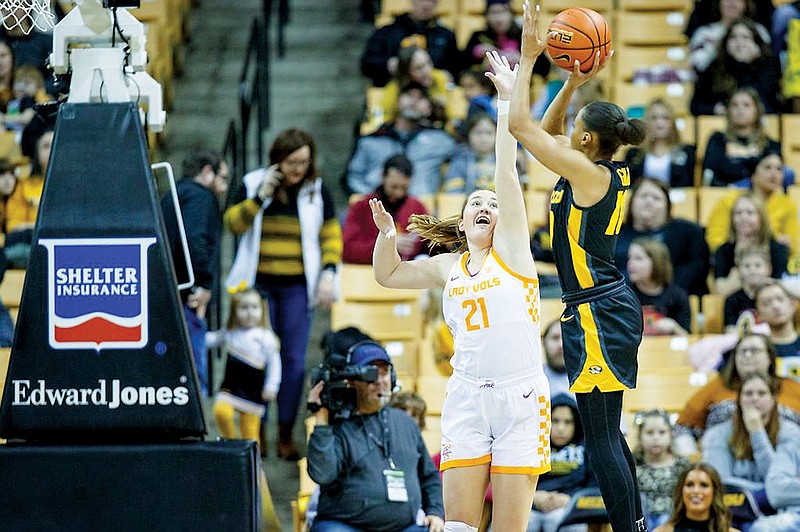 Katlyn Gilbert of Missouri puts up a shot against the defense of Tess Darby of Tennessee during Sunday’s game at Mizzou Arena in Columbia. (Emma Ramsey/Tennessee Athletics)

COLUMBIA -- Rickea Jackson scored a three-point play with :01.1 remaining Sunday, which proved to be the difference in the Tennessee Lady Vols’ 68-65 victory against the Missouri Tigers in Southeastern Conference play at Mizzou Arena.

Tennessee ended the game on an 8-0 run in the final minute, rallying to remain undefeated in conference play.

Jordan Walker started the run with a steal and a layup for the Lady Vols, then Jackson made another steal and Sara Puckett knocked down a 3-pointer to tie the game with :39 to play.

Missouri missed a shot on its next possession, giving Tennessee a chance to hold the ball for the final shot with :10 remaining.

The game featured five ties and eight lead changes, but none of those occurred during the first half. The Lady Vols jumped out to a 23-12 lead in the final minute of the first quarter.

Hayley Frank made a pair of free throws to cut Missouri’s deficit to nine points at the end of the first quarter. The Tigers cut the Lady Vols’ deficit to four points on three occasions in the second quarter, but Tennessee went into halftime ahead 33-27.

Frank made a 3 to give Missouri its first lead at 37-35 early in the second half. She then gave the Tigers their largest lead of the game on a jumper with a little more than three minutes left in the third quarter to make the score 47-40.

Frank made a pair of 3s late in the fourth quarter, the second make giving the Tigers a 65-60 advantage. She finished the game with a season-high 26 points, shooting 5-of-9 from 3-point range.

Jayla Kelly also reached double figures with 14 points and added a game-high nine rebounds for the Tigers, who only committed 11 turnovers but had three in the final 2:02 that led to seven points for the Lady Vols.