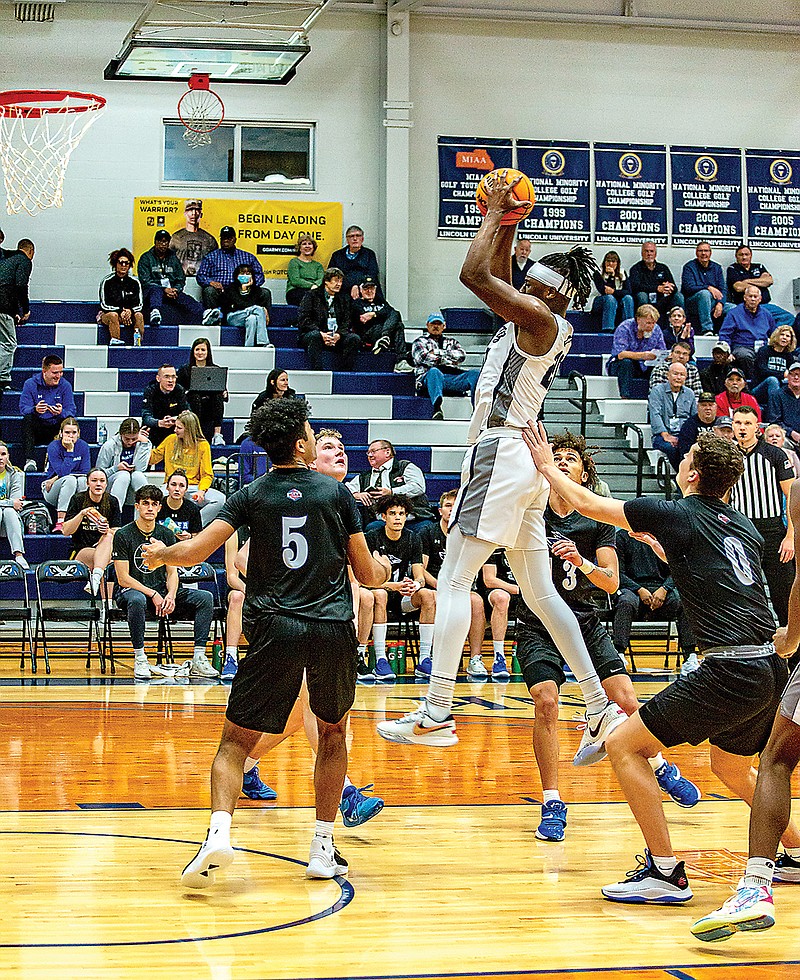 Lincoln's Kevin Kone charges the lane with the ball during a game this season against Nebraska-Kearney at Jason Gym. (Ken Barnes/News Tribune)

The Lincoln men’s and women’s basketball teams will wrap up a three-game road trip today when they take on Missouri Southern in Joplin.

The men’s game will wrap up the MIAA doubleheader with a 7:30 p.m. start.

Lincoln (11-5 overall, 7-5 MIAA) has split its first two games on the trip. The Blue Tigers defeated Missouri Western 70-56 last Thursday in St. Joseph, then fell 59-38 to Northwest Missouri on Saturday in Maryville. The 38 points were a season-low for the Lincoln men.

Artese Stapleton shared team-high scoring honors with Sai Witt with 19 points in the win against Missouri Western, then topped Lincoln with 13 points against Northwest Missouri.

Stapleton is second in the MIAA in scoring, averaging 18.3 points per game. Kevin Kone of the Blue Tigers tops the conference in rebounding with 12.3 per contest.

Sam McMahon, a former Jefferson City Jay, is in his first year as head coach at Missouri Southern. Paul McMahon, another former Jay, is an assistant coach for the Lions.

Missouri Southern is fourth in the conference standings, while Lincoln is tied for fifth with Fort Hays State.

Missouri Southern is sixth in the conference standings, while Lincoln is tied for 11th.

Lincoln has dropped the first two games on its trip to snap a two-game winning streak, falling 65-54 at Missouri Western and 72-48 at Northwest Missouri.

Missouri Southern has won its last four games, including a 72-53 victory Saturday at Rogers State. The Lions have outscored their opponents by an average of 16 points in the streak.

Stokes is fifth in the conference in scoring at 16.2 points per game, leads in assists with 5.5 per contest and is second in steals with 3.0.